Nash Grier is a 16-year-old Vine superstar who has used his popularity to grow a cult-like following of teenage girls, but now he’s in the media for a whole new reason … Read on for the facts on Grier.

1. A Homophobic Vine Video Was Recently Posted by Grier

Promoting a false stereotype that HIV only affects gays to his millions of teen fans is extremely dangerous. https://t.co/W6X9MUrgUK

The above Vine was posted by Grier and has gotten him into a lot of hot water. The video has since been deleted, but Grier’s only response so far was to upload a video on how to deal with haters … For more on this incident, check out the below link: 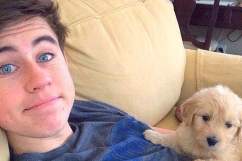 2. He Has The Most Followers On Vine

According to seenive Nash Grier has 8.3 million Vine followers. Nash has the most in the world, surpassing Miley Cyrus, One Direction, and all other celebrities. The only Person who comes close is KingBach with 7 million. I bet everyone would like to know the secret to Nash’s success.

Grier got his big break on Vine by posting a video of his sister.

He got his big break in mid-July, when Tiffiny Semashko, a high school student in Arkansas with about 300,000 followers at the time, re-Vined his “They. Need. Jesus.” About three weeks later, he said he had 200,000-plus followers.

After this video, people started to notice Nash’s Vine related talents and fans couldn’t get enough.

3. There Is an Upcoming Movie Starring Nash And Fellow Viner, Cameron Dallas

According to The Daily Dot:

That sustained squealing you might have heard over the last day is the sound of teenage girls across America celebrating the news that Nash Grier and Cameron Dallas are getting their own movie.

Nash and Cameron both have huge followings and Awesomeness TV has signed them to make more content and an upcoming movie.

4. His Brother Hayes Is Also a Vine Star

Hayes has 2.5 million Vine followers. He is 13-years-old and extremely popular. He appears in many of Nash’s Vines and the fans love to see them together.

5. He Used to Live in The Spotlight of His Football Star Brother, Will

Fame runs in the Grier Family, as Nash’s older brother Will was one of the top recruits in the country to play college football.

According to The Charlotte Observer:

Last year, Nash’s older brother, Will, threw for a national-record 837 yards in one gameas Davidson Day’s quarterback, and a national recruiting website rates him the 25th best overall recruit in the country. He now finds himself sharing the limelight in the Grier house.

“I’m not Will’s brother anymore. Will is my brother,” Nash says, grinning. “I’m paving the way for all middle children out there.”