An airline passenger was traveling from Philadelphia, Pennsylvania to Punta Cana Mexico on U.S. Airways Flight 850 when he sneezed and allegedly said, “Sorry, I just came from Africa”, alluding to the current Ebola outbreak.

Startled guests around him alerted flight attendants, who radioed to Punta Cana airport crew and asked to have a hazmat team ready at the gate.

The man claimed to be joking, but the attendants would have none of it.

It was later confirmed that the man was never in Africa… after he had been detained for 2 hours. 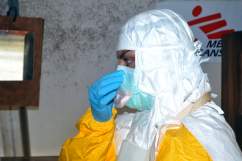