Rex Murphy is a commentator for the CBC’s The National’s Point of View, a news show.

Following yesterday’s tragic shooting on Parliament Hill in Ottawa, which claimed the life of the unarmed guard Nathan Cirillo, Murphy addressed his nation.

He thanks the Sergeant-at-Arms Kevin Vickers for taking down “the brute”, of whom he refuses to name.

A very well-done and thought out segment in comparison to the usual fear-mongering broadcast by today’s media. 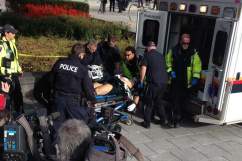 Read More
Canada, Ottawa, Ottawa Shooting, Terrorism
Rex Murphy is a commentator for the CBC's The National's Point of View. Yesterday he addressed Canada in a poignant segment about the death of Nathan Cirillo.