Here’s the list of the top 5, funniest viral videos for the week of December 2014.

Crazy Pilot goes wonkasComment below and tell me what strange mashup you want next?2014-12-17T12:57:38.000Z
A video of American Airlines flight passengers experiencing severe turbulence takes a funny turn when dubbed over with Gene Wilder’s “Boat Song.”

2. Magician Gets Out of Speeding Ticket With Magic

Magician gets out of Speeding Ticket with Magic!Please watch: "FORGETTING MY CUBES AT THE TODAY SHOW // BEHIND THE SCENES" https://www.youtube.com/watch?v=ioOngRuPw5Y -~-~~-~~~-~~-~- December 5th around 3am I was pulled over doing 42 in a 30 MPH. I told the cop I was coming from a Holiday Party in NYC. He asked why I had all the cards in my car and I told him I was a magician. He then asked me to show him a magic trick. I'm glad to say I left without a ticket. https://www.facebook.com/StevenBrundageMagic http://www.StevenBrundageMagic.com For Licensing Contact: Steven@StevenBrundageMagic.com Follow me on twitter for more: https://twitter.com/BrundageMagic2014-12-06T17:02:50.000Z
Steven Brundage is a magician who got pulled over by police after a holiday party gig. To get out of a ticket, he did a magic trick with a Rubik’s Cube.

VideoVideo related to the 5 funniest youtube videos you need to see this month2015-01-04T14:41:56-05:00
A sketch that aired last night on Saturday Night Live” featuring Vanessa Bayer pokes fun at political correctness regarding race in children’s toys.

Ray Kaunisto gets 7 Meows in an Intermission InterviewLooks like we missed a meow just at the end when he is leaving. Give Ray 7 meows on the Interview.2014-11-29T03:32:51.000Z
Ray Kaunisto is a hockey player with the Kalamazoo Wings of the ECHL. In a recent sports interview, Kaunisto fit seven “meows” in like in “Super Troopers.”

5. Dad Gets Daughter an Actual Frozen Doll for Christmas

VideoVideo related to the 5 funniest youtube videos you need to see this month2015-01-04T14:41:56-05:00
This little girl asked her father for a Frozen doll for Christmas, either Princess Anna or Elsa. But her dad got her a doll frozen in ice in an epic dad joke. 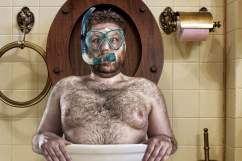 The 5 Funniest YouTube Videos You Need to See This Week

Read More
Facebook, Funny Videos, Youtube
Here’s the list of the top 5, funniest viral videos for the month of December 2014. The end of the year brought funny videos, check the best out here!