Single? Married? In a relationship? Whatever your situation happens to be, Valentine’s Day is the perfect time to party with those you love about love.

Here are 5 games you can play today whether you happen to celebrating with your singlehood with other single friends or celebrating years of bliss with your significant other.

But please remember to drink responsibly and never, ever drive after drinking.

Items: Deck of cards, cup of booze or beer

Circle of Death (or King’s Cup) is an easy-to-play drinking card game with various regional differences. Here you will find the version played in New York City. All you need is a deck of cards and booze.

To set up the game you will need a full deck of cards, without the jokers, and either a cup full of anything alcoholic or a can of beer. Put the beer or drink in the center of the table and arrange the cards face-down around it.

Here are what the cards mean (remember, this is regional):

2 – “Two for you” – Give out two drinks
3 – “Three for me” – Take three drinks
4 – “Whores” – Girls drink
5 – “Bust a jive” – Do a dance move, the next person then does that dance move and adds to it, and so on. The dance moves keep going until somebody can’t execute them in the correct order. That person drinks.
6 – “Dicks” – Guys drink
7 – “Heaven” – Everybody reaches to the sky immediately. Last person to do so drinks.
8 – “Pick a date” – Pick somebody to drink with you. Every time you screw up or have to drink, they have to drink, too. But if they drink, you don’t have to (unless you both are “dating” each other.)
9 – “Bust a rhyme” – The person who draws a card says a word to rhyme. Orange, purple, and silver (and any other non-rhyming English words) are illegal. The people then go around in order trying to rhyme with that word. No repeats. If someone can’t think of a rhyme or accidentally repeats, they drink. Note: For more advanced people, rhythm can be kept.
10 – “Categories” – The person who draws the card picks a category, like “farm animals” or “brands of cereal.” The people then go around in the circle naming things within this category. No repeats. If someone repeats or can’t think of something to contribute, they drink.
Jack – “Never have I ever” – Everybody puts up five fingers. The person who drew the card says something they’ve never done, and anybody who has done it has to put a finger down. It can be as dirty or as clean as you like. The person who loses all five fingers first drinks.
Queen – “Question master” – This person is now the question master. Until the next queen is drawn, this person can ask anyone a question. If they fail to answer the question with a question, they drink.
King – “Make a rule” – A rule is made that lasts until the end of the game. Rules can be compounding, so after all four kings are played, there will be four rules. Anytime a rule is broken, and a person gets called on it, they have to drink.
Ace- “Waterfall” – Everybody drinks until the person who drew the card stops drinking. The last person to draw “Waterfall” has to drink the cup or beer at the center of the cards.

Items: Phone with Heads Up! app, cup of booze or beer

You can watch Ellen show you how to play Heads Up! above. To make it a drinking game, simply add taking a drink when somebody gets it wrong. If you have more than three people, teams can be formed.

To make it a Valentine’s Day game, simply purchase the “Build Your Own” deck option and build a deck with references to this most superstitious of holidays. Suggestions include: cupid, sweet hearts, and love.

How to Play Flip CupWatch more Bar Games videos: http://www.howcast.com/videos/133368-How-to-Play-Flip-Cup It goes by many names, but flip cup is the mother of all team drinking games. Bottoms up! Step 1: Divide into teams Divide the number of players evenly into two teams and line them up along the table. Warning Do not play flipcup in your mother's formal dining…2009-02-25T16:06:44.000Z

If you don’t know how to play flip cup, it’s very easy to learn and can be played with lots of people if you’re having a party.

Check out the minute-long video above with a quick how-to explanation.

This game explanation can get a little long-winded, so we’ll let the pros DrinkNation.com explain:

If you guess right, you can choose to flip again. Another successful guess lets you pass the coin to anyone of your choosing. A wrong guess has normal consequences.

If you guess right three times in a row, you may retrieve an article of clothing and put it back on. The coin is then passed to your right.

The only other rule is lousy coin tosses need to be re-tossed.

What else? Just drink. Especially if you’re single. 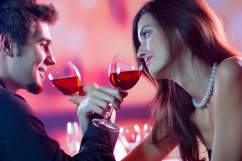 Read More
Drinking Games, Valentines Day
Single? Married? In a relationship? Whatever your situation happens to be, Valentine's Day is the perfect time to party with those you love about love.