June 6, 2015 is the 71st anniversary of the 1944 Normandy beach invasion by American and allied forces against Nazis in France. It was the the largest seaborne invasion in history and helped free France from Nazi control. It also inspired the best orators in history. Read the top quotations here.

2. “God almighty, in a few short hours we will be in battle with the enemy. We do not join battle afraid. We do not ask favors or indulgence but ask that, if You will, use us as Your instrument for the right and an aid in returning peace to the world.” — Lt. Col Robert L. Wolverton, commanding officer of 3rd battalion, 506th PIR.

3. “The waiting for history to be made was the most difficult. I spent much time in prayer. Being cooped up made it worse. Like everyone else, I was seasick and the stench of vomit permeated our craft.” — Pvt Clair Galdonik, 359th Infantry Regiment, U.S. 90th Division

5. “There’s a graveyard in northern France where all the dead boys from D-Day are buried. The white crosses reach from one horizon to the other. I remember looking it over and thinking it was a forest of graves. But the rows were like this, dizzying, diagonal, perfectly straight, so after all it wasn’t a forest but an orchard of graves. Nothing to do with nature, unless you count human nature.” — Barbara Kingsolver, American novelist, essayist and poet

6. “Lieutenant Welsh remembered walking around among the sleeping men, and thinking to himself that ‘they had looked at and smelled death all around them all day but never even dreamed of applying the term to themselves. They hadn’t come here to fear. They hadn’t come to die. They had come to win.” — Stephen E. Ambrose, Band of Brothers: E Company, 506th Regiment, 101st Airborne from Normandy to Hitler’s Eagle’s Nest

7. “There is one great thing that you men will all be able to say after this war is over and you are home once again. You may be thankful that twenty years from now when you are sitting by the fireplace with your grandson on your knee and he asks you what you did in the great World War II, you WON’T have to cough, shift him to the other knee and say, ‘Well, your Granddaddy shoveled shit in Louisiana.'” ― General George S. Patton, Jr. to his troops on June 5, 1944

8. “It was unknowable then, but so much of the progress that would define the 20th century, on both sides of the Atlantic, came down to the battle for a slice of beach only 6 miles long and 2 miles wide.” — President Barack Obama

9. “And what a plan! This vast operation is undoubtedly the most complicated and difficult that has ever occurred.” — Winston Churchill

10. “Men, I am not a religious man and I don’t know your feelings in this matter, but I am going to ask you to pray with me for the success of the mission before us. And while we pray, let us get on our knees and not look down but up with faces raised to the sky so that we can see God and ask his blessing in what we are about to do.”

“God almighty, in a few short hours we will be in battle with the enemy. We do not join battle afraid. We do not ask favors or indulgence but ask that, if You will, use us as Your instrument for the right and an aid in returning peace to the world.”

“We do not know or seek what our fate will be. We ask only this, that if die we must, that we die as men would die, without complaining, without pleading and safe in the feeling that we have done our best for what we believed was right.”

“Oh Lord, protect our loved ones and be near us in the fire ahead and with us now as we pray to you.”

All were silent for two minutes as the men were left, each with his individual thoughts. Then the Colonel ordered, “Move out.” — Lt. Col. Robert L. Wolverton, commanding officer of 3rd battalion, 506th PIR. 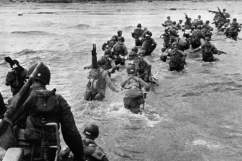