Coldplay will perform during the Super Bowl 50 Halftime Show, joined by Beyoncé and the uncomfirmed but likely presence of Bruno Mars. Chris Martin and Beyoncé recently teamed up for a song on Coldplay’s latest album. The success of the tune, called “Hymn For the Weekend,” has been marred somewhat by the controversy surrounding the music video, in which the band and Beyoncé enjoy all the best cultural stereotypes that India has to offer.

Chris Martin does several impressions including a really good Mick Jagger. He also does a so-so impersonation of Bruce Springsteen, but he really does have the moves like Jagger (I’ll see myself out). Other highlights include James hoisting Chris up on his shoulders so they can grab some San Francisco 49s winter hats off the wall of a convenience store. When James and Chris are wearing the hats and matching sunglasses back inside the car and singing a call-and-response version of Coldplay’s “Hymn for the Weekend,” they look like twins. They even have the same facial stubble!

Chris Martin solidifies himself as the gentlest, healthiest rock star on the planet by getting the biggest buzz of his life from an impromptu stop at a child’s lemonade stand. That and the fact that he’s wearing a small “love” pin on his sweatshirt.

The blokes harmonize pretty well together on “When I Ruled the World” and “Us Against the World.” James Corden is great during these segments because there is comedy and humor and a little bit of friendly teasing, but you still get the overall sense that he genuinely cares about his ‘Carpool Karaoke’ guests and appreciates their talents. This sentiment is especially true when he and Chris Martin have a cuddle when they need to stop overnight at a cheap motor inn.

When they wake up the next morning to find that their car has been “stolen,” in order to make it the rest of the way to the Bay Area for the Super Bowl the guys take advantage of a tandem bike that has conveniently been left outside another hotel room. That kind of makes them thieves as well, doesn’t it?

Fun fact: Coldplay went by the band name “Starfish” for one whole concert. 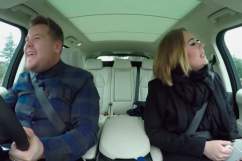