Election Day is drawing closer, and millions of Americans have tuned in for the Presidential debate. Tensions between Trump and Clinton supporters are running high, with many voters planning to use their Halloween costumes to share their political views. Some voters plan to dress as the politician they they support, while others plan to dress as exaggerated or funny versions of the candidate they refuse to vote for.

Want to dress up like Hillary for Halloween 2016? We’ve gathered together some funny, scary, and earnest Hillary Clinton Halloween costumes. Whether you’re Pro-Hillary or Pro-Trump, we’ve curated some Halloween costume ideas for those who want to dress as the Democratic Nominee. Please note that any implied opinions about the 2016 Presidential candidates featured in this post do not necessarily reflect the attitudes of the author or Heavy.com.

If you’re one of the people who believe Hillary Clinton deserves prison time over the events in Benghazi in 2012, this might be the costume for you. If you’re looking for a couple’s costume, you can wear this prison jumpsuit while a friend or partner wears a Hillary for Prison shirt. The prison jumpsuit is also something you can re-use for a couple of years, going for another Halloween party as a cast member from Orange is the New Black, or as whatever celebrity happens to be in the headlines for jail time. This jumpsuit is available in both beige and orange.

Looking for a quick, simple Halloween costume? Just pop on a Hillary mask, and you’re good to go. This smiling Hillary mask is made from latex. Looking for a couple’s costume idea? Have your boyfriend or husband dress in a suit, and wear this matching Bill Clinton mask. Politician-style suits are the obvious choice to pair with these masks, but you could mix things up and try some wacky clothes instead. Clown costumes or a Jedi knight costume could be some really weird, but memorable, ways to subvert expectations.

Already kind of look like Hillary, except for the hair? This wig will have you looking like Mrs. Clinton, without needing a haircut or oodles of styling product. Just pair this wig with a sensible blue ladies pantsuit, and you’ve got a classic Hillary look. If you’re looking for a couple’s costume or group costume, have your friends wear Hillary for President shirts, and be your entourage.

4. All In One Zombie Kit

For many people, Halloween is all about zombie costumes. If you want to do an unusual take on a Hillary costume, grab the wig above and opt for zombie makeup on your face. This all-in-one zombie makeup kit lets you go rotted, scabby, dripping, or peeling with your zombie look. The kit includes a makeup tray, fake blood, liquid latex, tooth black, blood capsules, and sponges. Throw on a pantsuit and some pearls, and you’ll like Zombie Apocalypse Hillary. The same makeup kit materials can also be used to make yourself into Vampire Hillary.

Buy the All In One Zombie Kit here.

Want to go for a more exaggerated, political cartoon-style look? This mask is perfect for Trump supporters, as well as apolitical types who think both sides in this election are a bit laughable. Masks of Bernie Sanders and Donald Trump are available in the same style, should you want to get dressed up with friends. American flag accessories make a nice addition to your look. You could also carry around a laptop all night, in homage to Hillary’s emails.

Hate dressing up, but still forced to make an attempt at a “costume”? This funny t-shirt may be just your speed. The text reads: “I was going to dress up as Hillary for Halloween, but the costume store was out of witch hats.” This shirt is available in men’s and women’s sizes, and in a variety of colors. Want more costume ideas like this? You may be amused by some of the picks on our guide to the best costume t-shirts for Halloween.

This prison-inspired costume is perfect for those who prefer costume t-shirts to full Halloween garb. The front of the shirt looks like it has a small prison ID tag attached.

Costume t-shirts are a great option for people who hate over-the-top Halloween costumes, or for those on a tight budget. This funny shirt reads: “I’m really Hillary Clinton, don’t let this ‘human’ costume fool you.” Just toss on the shirt and bottoms of your choice, and you’re good to go. No wig or makeup required. Live in a part of the country where a tank top isn’t warm enough for October? This matching sweatshirt carries the same message, but will keep you much warmer.

Like minimalist costumes? These two sets of novelty sunglasses are perfect as a low-key couples costume. One set is designed to mock Trump’s hair and eyebrows, while the other set is designed to mimic Hillary’s hair and upper facial area. You can wear them with normal street clothes, or more dressy “politician” clothes. And of course, you can also get wacky and wear them with swimwear or hula outfits. 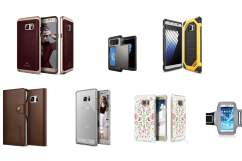 If you’re one of the people who is scared of a Hillary presidency, this mask will definitely show where you stand. The exaggerated facial features will make it clear that you support Trump. If you want to take the “scary Hillary” theme as far as possible, try pairing this mask with a Grim Reaper costume. However, because the facial features are exaggerated, some people may need to see you in a pantsuit and heels in order to get who the mask is meant to be.