The turkey is gone, and that means it’s time to start thinking about scoring some awesome video game deals to take advantage of Black Friday sales. But if you’re like me and hate lines/crowds/fighting with random people about the last game on the sale displays, you should check out Amazon’s Black Friday 2016 video game deals right from the comfort of your home.

Last year’s Amazon Black Friday video game deals were good, and this year’s are even better. We’re seeing great deals on the hottest consoles, high-quality peripherals, and the year’s best games. Whether you’re looking for an Xbox One S sale, the cheapest PS4 Slim, or over 50% off some new games, Amazon’s Black Friday video game deals has you covered.

Hmm, $299 for an Xbox One S? You might think that sounds high in comparison to the other Black Friday deals at other outlets, but this is for the 1TB edition (not the 500GB that is on sale everywhere else). What’s more, it’s also the military green colorway (not the storm gray that’s on sale elsewhere). It’s more likely that you already have a PS4 (since it’s the overall better-selling console), so now is the time to pick up the Xbox One S at $50 off.

We also included this on our list of the best Amazon Black Friday toy deals.

If you still haven’t upgraded to the new PS4 Slim, now’s the time to check out Amazon’s Black Friday video game deals, as they are selling the 500GB Uncharted 4 Bundle for $249.99 (which translate to $50 off). Of course, the fact that it’s bundled with Uncharted 4 sweetens the deal, as it is certainly a contender for game of the year. The new console has a slimmer profile, and it will soon take the place of the standard PS4. The deal is scheduled to end on November 28th at 11:59PM PST, so get it now while it’s still available!

If you’re on the hunt for some headset deals, Turtle Beach has a stellar sale going on right now. You can snag a $79.99 Xbox One headset for just $39.99. The Ear Force XO One Amplified Gaming Headset is 50% off, and it’s highly rated on Amazon, sporting 4.1 out of 5.0 stars from over 1,200 reviewers. The headset uses high quality 50mm speakers to deliver crisp highs and booming lows, and it sounds particularly good for a sub-$100 headset. In fact, we have it featured on our list of the best gaming headsets available.

If you’re looking for a second PS4 controller for some sweet, sweet multiplayer/co-op games, Amazon has the new Dualshock 4 wireless PS4 controller available now for $39.00. That’s 35% off the MSRP and a savings of $20. Best of all, you won’t have to wait in a line at a big box retailer like Walmart or Best Buy to get it because it’s available right online. So you can sit down at your PC, order it, and go right back to playing Battlefield 1 when you’re done.

The King of Fighters XIV – Launch Trailer | PS4https://www.playstation.com/en-us/games/the-king-of-fighters-xiv-ps4/ The King of Fighters saga continues with an epic new story! With one of the biggest rosters ever and 50 characters ready to clash, create the perfect team in the classic 3-on-3 battle system. Burn to Fight! http://www.snkplaymore.co.jp/us/games/kof-xiv/ © ATLUS. © SEGA. All rights reserved. ©SNK PLAYMORE CORPORATION ALL RIGHTS RESERVED.2016-08-26T14:00:05.000Z

The best new fighting game of 2016 will be on sale, and it’s a fully featured fighter with numerous modes and characters (unlike that other PS4 fighting game). Yes, shade thrown. But today, Amazon’s Black Friday video game deals include $25 off King of Fighters XIV, bringing it down to its lowest price yet, $34.79. The game currently has a Metacritic User Score of 8.6, making it one of SNK Playmore’s highest rated games ever.

With all of the incredible racing games on Xbox One — Forza 6, Forza Horizon, Project CARs, Need for Speed, etc — you can be sure that a racing wheel will get its fair share of usage. The best Xbox One racing wheel is on sale today at Amazon.com with significant savings of $100 off its MSRP. Now, the Thrustmaster TX Racing Wheel Ferarri 458 edition for Xbox One is on sale for $249.99. It’s designed with true racers in mind, featuring metal gas and brake pedals, as well as gear sequential paddle shifters like you’d find on a real racing car. The unit has a nice weight to it, and the pedals have grips on the bottom so that they won’t slide away from you while you’re playing. So if you’re looking for an Xbox One racing wheel deal, look no further than Amazon.

Buy the Thrustmaster TX Racing Wheel for Xbox One here.

Gears of War 4 is a high-quality Xbox One game, and now you can pick it up for just $29.99 — you WON’T find a better deal on Gears of War 4 before Christmas. At $30 off, it’s a must-buy for those who have yet to pick it up. The game is an entirely new direction for the franchise, and it is way less “dudebro” than the past (although some of it is still there).

The best gaming deal in Amazon’s Black Friday deals is 58% off The Elder Scrolls V: Skyrim Special Edition, which you can now pick up for just $24.99. I’m kicking myself that I purchased it at full price just a couple of weeks ago (during Target’s B2G1 free deal). Now, it’s just $25, and if you were one of those people who are waiting for a price drop before picking it up, now’s the time to do so. Not only does it bring a massive visual update to one of Bethesda’s most popular games to date, but it also brings mods to the console versions.

If you’d rather pick up a top-tier headset for cheaper than normal, check out the Astro Gaming A50 Wireless Headset for Xbox One, which is an entirely wireless solution for those who want to game from their couch (and no, you don’t have to connect a cord from your headset to the controller, either). This top-notch headset comes in at a whopping $100 off for the Halo edition, bringing the price to $199.99. For tha tprice, you’re getting a highly-rated headset that brings Dolby 7.1 surround sound without the cords. 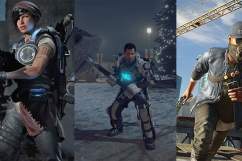 Read More
Black Friday, Headsets, PlayStation 4, PS4, Shopping, Xbox One
Now is the time to score some great gaming deals on PS4 and Xbox One consoles, games, and accessories.