The video was originally shared in the subreddit titled “Animals Being Jerks.”

Last month, at the 2017 Conservative Political Action Conference (CPAC), President Donald Trump accused the “fake news” media of making up sources and calling it the “enemy of the people.” He later used the phrase in the following tweet.

The above video of a swan references Trump’s attack on alleged fake news.

Swans are notoriously vicious, but mostly for territorial reasons, reports the BBC. Swan related deaths have occurred: in April 2012, Anthony Hensley, 37, of Des Plaines, Illinois, was attacked and killed by two swans while he was kayaking for work. Hensley worked for a company that used swans and dogs to keep geese away from properties, reports the Huffington Post. Hensley was forced out of his kayak by the swans and was unable to swim back to shore due to the weight of his work boots and heavy clothing. 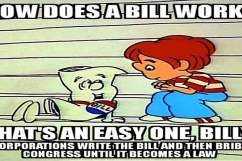 Congress Kills Online Privacy: All the Memes You Need to See