This year, Hanukkah runs through mid-December, beginning at sundown on December 12, 2017 and ending on December 20, 2017. Traditionally, the first candle of the menorah is lit at sundown of the first date, which always falls on the 25th day of the month of Kislev in the Jewish calendar. According to Chabad.org, for the next few years, the following dates are the start and end dates for Hanukkah:

Some of the traditions of Hanukkah include specific foods such as sufganiot, which are Hanukkah donuts; potato latkes, which are potato pancakes; mandelbrot, which is somewhat of a biscotti; and rugelach, which is a croissant pastry with a variety of options for fillings. Check out some recipes for to represent each of the traditional foods below. If you’d like to check any of them out, click the title of the dish.

Dreidels, which are four-sided spinning tops used to play gambling games, are also often seen at Hanukkah celebrations as well. When it comes to lighting the menorah, the first night has an extra blessing that is stated. It reads, “Baruch Atta adonai eloheinu melekh ha’olam shehecheyanu vekiyy’manu vehiggi’anu lazman hazeh.” The translation for this is, “Blessed are You, Lord our God, King of the universe, Who has kept us in life, sustained us, and brought us to this moment.” An old song that is often sung on the holiday is “I Have a Little Dreidel,” while Adam Sandler’s “The Chanukah Song” has become a famous tune as well. 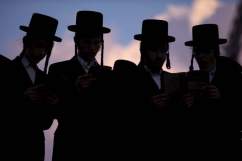 Yom Kippur 2016 Fasting & When to Break the Fast Rules

Read More
Hanukkah
What dates does Hanukkah 2017 start and end? Get the rundown and on how long the holiday runs and the candle lighting times.