The state of Massachusetts is preparing for its third Nor’Easter this month. Snow is expected to start falling around midnight on Tuesday, March 13, and will continue through the day on Tuesday. Most of the state is expected to see upwards of 10 inches of snow, with the highest snowfall totals predicted from Taunton down through Cape Cod.

Check out the latest expected snowfall predictions on the map below.

The following map shows the least amount of snow that will fall across the state — a “best case scenario.”

The map below shows a “worst case scenario” for snowfall totals.

The National Weather Service has issued a Winter Storm warning for much of the state and a blizzard warning for coastal areas including the Cape Cod and the Islands. Blizzard conditions are expected in many areas of the state, with poor visibility and treacherous driving conditions. Officials have asked those who do not need to travel to stay off of the roads on Tuesday.

“Snow will be heaviest in SE Mass where up to 2 ft is possible. Snow is expected to start around midnight tonight, and move out late tomorrow. Area of concern is across Cape & Islands where heavy wet snow along with strong, damaging winds could lead to downed trees & power outages,” the National Weather Service in Boston tweeted around 4:15 p.m. Eastern on March 12.

The worst of the storm will be from early Tuesday morning and throughout the afternoon. The snow even is expected to wind down around dinner time and should move out of the area by 8 or 9 p.m. Eastern.

Most schools in the state have already been cancelled for Tuesday.

“The storm itself is probably going to cover the entire length and width of the Commonwealth. Our anticipation is it’s going to be a very difficult day to travel,” Governor Charlie Baker said in a press briefing on Monday, March 12.

“I feel that we haven’t really seen this type of storm since 2015,” Boston Mayor Martin J. Walsh added.

As you can probably imagine, people living in the Northeast are pretty tired of snow storms and everything that comes along with them. From endless shoveling to lengthy power outages, Massachusetts residents have had a tough couple of weeks — and it looks as though things are about to get a lot worse before they get better.

News of another Nor’Easter — this one producing blizzard warnings and watches — has caused social media to fill up with some of the funniest memes and jokes. People on Facebook and Twitter have been sharing these jokes as a way to lighten the mood.

Below are some of the funniest memes and jokes floating around social media ahead of the first flakes.

They say we're going to get Two Feet of Snow! pic.twitter.com/o7H9dAf6v0 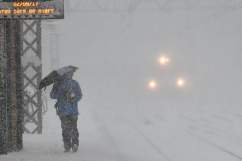 What Is a Blizzard? 5 Fast Facts You Need to Know

Read More
Boston, Jokes, Memes, Severe Weather, Weather
As the Northeast prepares for another snowstorm that will dump over a foot of snow from Tuesday into Wednesday, memes and jokes flooded social media. Here are some of the funniest ones.