The question of, “Will mail be delivered on Easter Sunday?” is answered with a big “No.” When is mail ever delivered on a Sunday, right? All post offices and federal offices of any kind will be closed holiday, which means that no businesses nor homes will get mail. This also counts out USPS packages. According to the USPS, because it is a federal holiday, all federal offices are closed. However, all federal workers are still paid for the day. But, even though there is no mail delivery, it doesn’t mean that package delivery is completely out the window. Find the list of observed holidays for the post office here.

Fedex will be closed, while UPS will be open, according to their websites, so you should get your packages on time. Amazon appears to be delivering as well, but USPS will not be running. UPS and FedEx will still pick up and deliver packages as scheduled. (Find the UPS holiday schedule here and see the FedEx holiday schedule here.) According to The Holiday Schedule, “All Post Office locations will be open and resume regular mail delivery on Monday, April 2nd, 2018.”

As far as Amazon is concerned, recently, Donald Trump fired off on the company, claiming that it takes advantage of the postal service, according to Geek Wire. Trump tweeted that, “I have stated my concerns with Amazon long before the Election. Unlike others, they pay little or no taxes to state & local governments, use our Postal System as their Delivery Boy (causing tremendous loss to the U.S.), and are putting many thousands of retailers out of business!” In response, via the USPS, the official statement released reads, “The growth in our Shipping and Packages business provided some help to the financial picture of the Postal Service as revenue increased $2.1 billion, or 11.8 percent.” 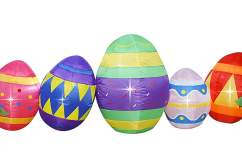 For those still in school, some schools are closed on Monday in order to observe the day, since it falls on a Sunday. Most banks, the New York Stock Exchange, Nasdaq, bond markets and most financial institutions are closed down as well. The Federal Reserve also follows this schedule. Courts will not be in session and most government jobs give their employees the day off. The Department of Motor Vehicles is definitely closed, as reported by USA Today. According to Patch.com, most public libraries are closed. When it comes to liquor stores, The Inquistr reports that each state has its own laws on whether they are open or not, though some may also have reduced hours of operation for the day.

On Easter Sunday, some have off of work and there are also tons of sales and restaurant deals going on for the holiday. Many department stores, malls, grocery stores and other retail chains are closed, though some remain open and are offering discounts. Online shopping can also be a good idea, with all the Easter sales going on right now.

On Easter Monday, trash pick up and recycling schedules will vary, so it’s important to check with your local service provider. However, many garbage services still run business as usual, despite the landfill and recycling centers possibly being closed. Most banks are closed for the holiday as well.

Read More
Easter
It's Easter Sunday. What are the holiday schedules for Amazon, Fedex and UPS delivery? What's running? Are my packages getting delivered?