The condom challenge has been around for more than a decade and is making headlines once more in 2018. The challenge, which involves snorting a condom up one nostril and pulling it out of one’s month, can be very dangerous.

While it’s unclear how this all started (perhaps by a couple of college kids who were bored from studying), snorting condoms seems to creep back up every few years.

The “challenge” involves completing the “skill,” hopefully without choking, getting sick, or suffering some other serious side effect.

1. What Exactly Is the Condom Challenge?

The condom challenge involves snorting an unwrapped condom through one nostril and pulling it out of one’s mouth.

The unwrapped condom is opened and unfolded. The tip of the condom (the sealed end) is placed at the base of one nostril while the other nostril is plugged using one’s finger. The condom is then snorted up the nostril, guided back using one’s hand. The condom finds its way to the back of the throat and is then pulled out the mouth.

Common side effects include gagging, coughing, pain, and crying. Less common, more serious side effects can occur (and you can read about them in Fact 5).

As far as what kind of condoms people use, there doesn’t seem to be a rulebook in play. Some people opt for whatever they have lying around the house, which speaks to the aforementioned boredom theory.

The video below shows a man completing the condom challenge. Please by advised that the content may be disturbing to some viewers.

2. The ‘Trend’ Started Years Ago

Believe it or not, people have been snorting condoms for years. All it takes is one strange YouTube video of someone trying something weird, which is sort of how this all got started.

The Huffington Post reported on the “condom challenge” back in 2013 after a few videos of teens snorting condoms went viral. It seemed that the more people saw videos of this, the more videos popped up.

In 2015, more videos of people snorting condoms were posted on YouTube, and the “condom challenge” trended again.

“In a three-minute video from 2015 a teen unwraps a condom and unrolls it before sticking it in his nostril. He then winces as he closes the other nostril with his finger and inhales the white rubber sheath up into his nose.  Seconds later he gags as he pulls the condom out of his mouth,” the Daily Mail reports.

Some of the earliest reports and videos involving people snorting condoms date back to 2007.

3.  It Wasn’t Supposed to be a Trend, but it Might Become One

In recent weeks, there has been some chatter about teens snorting condoms. However, it hasn’t been because this is a trend that kids are taking part in.

According to the Washington Post, the reports were started by local media outlets in the San Antonio-area after reporters sat in on a presentation in which the “condom challenge” was discussed.

“The only thing viral about the condom challenge right now is the moral panic about the idea of teens doing the condom challenge. In a matter of days, word spread from a single local news report to a small army of local and national publications across the world, all warning about a challenge that, in 2018, barely exists,” the Washington Post reports.

It seems as though this scenario has created the perfect storm for daredevils and copycat artists alike. While the “trend” doesn’t seem to be taking off at record speeds, there are definitely people out there who are curious about doing this “challenge,” and there are some new condom-snorting-videos on social media.

4. Many Feel it Will Catch on Like the Tide Pod Challenge & the Cinnamon Challenge

It’s entirely possible that the condom challenge becomes a worldwide phenomenon and that people all over the globe will start uploading videos of themselves snorting rubbers. Unfortunately, the more unsafe and strange these trending ideas are, the more popular they become.

In recent months, the Tide Pod Challenge became a thing. People were actually eating Tide Pods, which are detergent-filled plastic units that are used in laundering clothes. As Heavy previously reported, six deaths resulted from such behaviors.

Before the Tide Pod Challenge, the Cinnamon Challenge was popular. That challenge involved people trying to swallow a tablespoon of cinnamon, dry, which is very dangerous.

Any and all of these consumption-type challenges are extremely dangerous and can cause permanent harm to one’s body. Regardless of warnings, however, people are still determined to complete these tasks, whether it be for 5-minutes of internet fame or bragging rights amongst their friends.

5. Snorting Condoms Is Dangerous & Can be Life-Threatening

Snorting condoms is dangerous and can be life-threatening, according to healthcare professionals. There are plenty of things that could go “wrong” while snorting a condom.

For starters, “the condom could easily get stuck in your nose or your throat, blocking your breathing or causing you to choke,” associate professor at the Johns Hopkins Bloomberg School of Public Health, Bruce Lee, wrote in a column for Forbes Magazine last month.

Lee goes on to detail a story about a 27-year-old woman who experienced a bad side effect from snorting a condom.

“The condom went down her trachea and into her lungs, blocked one of her airways, and resulted in pneumonia and a collapse of the right upper lobe of her lung,” he wrote.

“Nothing other than saline or a nasal spray should go into you nasal cavity, mostly because the tissue’s extremely delicate,” Dr. Shilpi Agarwal, family medicine physician, tells Heavy.com. “Those are mucous membranes that help to filter out toxins, so something so huge like a condom, which is typically made of latex, would be really abrasive in that area.”

Dr. Agarwal added that choking on a condom — or swallowing one — can also be dangerous. If a condom ends up getting inhaled into the lungs, a person could develop bronchitis or pneumonia. 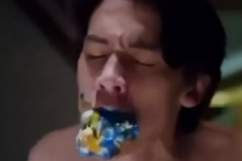 Read More
5 Fast Facts, Social, Youtube
People are snorting condoms and pulling them out their mouths. Here's what you need to know.