Romania’s Simona Halep is back and looking for a Grand Slam title after falling to Maria Sharapova in the final match of 2014 Wimbledon.

After her breast reduction surgery, she has climbed rapidly through the ranks, winning 6 WTA titles in a row in 2013 and obtaining the Most Improved Player award on the WTA.

Here’s what you need to know about the Romanian tennis star:

Simona Halep returns a serve at the 2014 French Open. (Getty)

After sweeping Andrea Petkovic in her first ever semifinal appearance in a Grand Slam event, she will face veteran Maria Sharapova. Halep is a tough opponent and has yet to lose a set in the French Open this year. However, Halep missed a chance after falling to Maria Sharapova in the final match. She said prior to the loss:

I think #Halep's nerves will determine outcome of Saturday's final. She's better than #Sharapova right now, but will she be too tight? #RG14

Halep has yet to win a Grand Slam tournament.

2. She Had Breast Reduction Surgery

Halep had breast reduction surgery in 2009, a year after this photo was taken. (Getty)

There has been a direct connection between the skyrocketing of Halep’s ranking in the WTA and her breast reduction surgery.

The 5’6 pro is known for athleticism and gracefulness on the tennis court, especially after the surgery 5 years ago. Halep decided on the surgery when she was experiencing back pain and discomfort from her 34DD size bra. The surgery brought her cup size down to a much more comfortable 34C.

Since then she has risen 450 spots in the rankings. Halep told media:

Just last month in May 2014 Halep signed a deal with Adidas to endorse the popular sports brand.

Simona’s drive, talent and personality fit perfectly with adidas’ ambition to empower young tennis players around the world. We look forward to accompanying her for many years to come as her impressive move up the WTA rankings continues to gain momentum”

She is now among a few of the most elite players representing the brand, including Caroline Wozniacki, Ana Ivanovic and Andy Murray.

“I’m delighted to sign with adidas, a global leader in Tennis. The brand has a strong history in tennis and sports technology and I look forward to joining the family and playing in the legendary three stripes.”

Watch the video above to see her interview in an event prior to the start of Wimbledon.

5. Halep May Be the Most Graceful Player On Tour

Halep has been noted for her calm, straightforward presence on the tennis court. While players like Maria Sharapova are basically screaming the whole match, you don’t hear so much as a cough out of Halep’s mouth. The silent player moves smoothly around the court in a no-nonsense kind of matter that people find enjoyable to watch.

She’s the anti-diva. She doesn’t make a peep when she plays. She doesn’t cut a physically intimidating presence like most of the top women on tour. Ask her a question, and she’ll look you in the eye and give you a straight answer. And the best thing is, you believe her. There’s not a lick of nonsense about her.”

Her style of play is rare and admired by all those who watch the game. 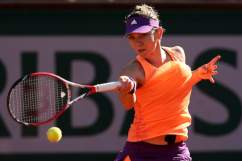 Simona Halep vs. Andrea Petkovic: Tweets You Need to Read

Read More
5 Fast Facts, French Open, Sports, Tennis
Romania's Simona Halep is back and looking for a Grand Slam title after falling to Maria Sharapova in the final match of 2014 Wimbledon.