Germany is on top of the soccer world after winning the World Cup and dynamic playmaker Mesut Ozil is a big reason why.

Ozil, who scored a key goal in the Germans’ round-of-16 win over Algeria, is regarded as one of the best midfielders in the world and one of the best players in the English Premiere League, where he plays for Arsenal.

Ozil during Germany’s win over Argentina in the 2010 World Cup quarterfinals. (Getty)

Ozil made his debut for the German national team in 2009 and his World Cup debut in 2010, when the Germans advanced to the semifinals before losing to eventual champion Spain.

Ozil started all 10 of the Germans games and finished with a goal and three assists, earning a nomination for the tournament’s Golden Ball award.

He continued his impressive international play in qualification for the 2012 European Championship, scoring five goals and notching seven assists during qualification and earning three Man of the Match awards during the tournament.

Ozil and Messi during a 2012 Spanish League match. (Getty)

It’s hard to think of a better compliment than being compared to a guy Ozil and his teammates will be trying to beat today: Argentina’s Lionel Messi.

But that’s exactly how Horst Hrubesch, Ozil’s coach on the German under-21 team, described Ozil in a 2010 interview with the Daily Mail.

We in Germany are prone to rave about foreign players. We praise Wayne Rooney to the heavens, likewise (Cristiano) Ronaldo or Messi. But we have our own Messi. Our Messi is Ozil.

3. He Was Transferred from Real Madrid to Arsenal for $68 Million

After playing three seasons for Spanish powerhouse Real Madrid, Ozil was transferred in 2013 to Arsenal of the English Premiere League for a club-record $68 million. (€50 million, £42.5 million) The transfer was the most expensive ever for a German player and the third most expensive in English soccer history.

The Guardian reported at the time:

Ozil becomes the third most expensive signing in British football history, behind Fernando Torres, who joined Chelsea from Liverpool for £50m in 2011, and Carlos Tevez, who cost Manchester City £45m. The 24-year-old has agreed a five-year contract, which is worth a basic £150,000 a week, with bonuses on top, having completed a medical earlier in the day in Germany, where he was preparing with his national team for the World Cup qualifier against Austria on Friday.

After an up-and-down 2013-14 season in which Ozil was partially limited by injuries, he was rumored to be a candidate to go back to Spain, where multiple media outlets reported Barcelona was interested in bidding for him.

But according to Metro, Barcelona has abandoned its pursuit of Ozil now that Liverpool’s Luis Suarez — whose value dropped after his notorious World Cup biting incident — may be available.

According to a translation a Yahoo! translation of an interview with the German sports newspaper Bild, Capristo had this to say about her relationship to Ozil:

We met last year. We’ve been together since the beginning of this year. We took our time deliberately. It has to feel right. I need someone who is very honest. I was raised the traditional way and I take relationships very seriously. That’s not a simple matter in our generation.

She moved to London after he went to Arsenal last summer and has been constantly tweeting her support for her boyfriend. Their not-so-long relationship didn’t keep Capristo from looking for apartments in the London area, and fans of the two lovebirds hope they’re gonna settle down together soon. When interviewed by a German newspaper, Capristo said their relationship could be compared to Bonnie and Clyde.

We are in a partnership. Partners in crime, so to speak. We share the same sense of humor. We take our relationship very seriously, but not so much ourselves as people.

5. He’s a Turkish-German & a Practicing Muslim

Ozil is of Turkish descent, which led to initial speculation that he might play internationally for Turkey rather than Germany.

My family and I will always be Turkish but I was born and I live in Germany. I feel more comfortable in a Germany shirt.

Ozil was in Turkey with the German national team for a European Championship qualifying match in 2012, which the Germans won 3-0, earning Ozil a congratulatory handshake from German Chancellor Angela Merkel.

Ozil is a practicing Muslim who recites the Quran before games. He faced a challenge this year because the World Cup falls during Ramadan, the month in which Muslims fast from dawn until sunset.

Ozil is among several players in the tournament who opted not to fast — a decision supported by Germany’s Central Council of Muslims.

Ozil, the only practicing Muslim in Joachim Low’s Germany squad, has already said that he will not observe Ramadan.

“I can’t do it because of my job here, and I’d like to think the Algerians will do it just like me,” he told kicker. “We would risk our health by not drinking or eating. And that would also not be consistent with the Quran.”

Ozil has been backed by the Central Council of Muslims in Germany, who reached an agreement with the German FA in 2010. The Central Council had asked for an expert opinion by the Islamic Al-Azhar academy in Cairo, which came to the conclusion that fast-breaking is allowed for professional footballers. 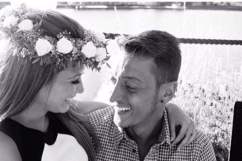 Read More
5 Fast Facts, Soccer, World Cup
German playmaker Mesut Ozil is regarded as one of the best and most popular players in the world.