Andrew Luck and the Colts host Nick Foles and the Eagles on Monday Night Football. (Getty)

Another week, another wild come-from-behind win for the Philadelphia Eagles.

The Birds, who needed to dig out of a double-digit deficit against putrid Jacksonville in Week 1, was down big again Monday night in Indianapolis. But the Birds scored 24 second-half points and stunned the Colts on Cody Parkey’s last-second field goal for a 30-27 win that improved their record to 2-0.

Cody Parkey was on the Indianapolis Colts roster during training camp. The Colts were comfortable with Adam Vinatieri as their kicker, so they dropped the rookie from Auburn before the season opener.

Monday night, though, Parkey was celebrating on the field at Lucas Oil Stadium as his former teammates walked off the field hanging their heads.

Parkey, who signed with the Philadelphia Eagles prior to the start of the season, kicked a 42-yard field goal as time expired Monday night, delivering the Birds a come-from-behind 30-27 win and sending the Colts to an 0-2 start.

Parkey made the kick despite Colts coach Chuck Pagano’s attempt to ice him by calling timeout a second before the Eagles snapped the ball on Parkey’s initial attempt.

Parkey’s attempt on his first try was good, but was waived off because of the timeout. But after taking a breather, he came through again for the game-winner.

McCoy scored from a yard out to bring the Birds with a touchdown at 20-13 with 4:42 left in the quarter.

Trent Richardson then fumbled on Indy’s ensuing drive and the Eagles recovered and then made the Colts pay. Darren Sproles bounced off three Colts defenders on his way to a 19-yard touchdown run to tie the game at 20 with 2:52 left in the quarter.

Andrew Luck hit Ahmad Bradshaw for a 7-yard touchdown strike that put Indy up 27-20 with 11:49 left in the game, but Luck threw a crucial interception later in the quarter that let the Birds back into the game.

Malcolm Jenkins picked off a Luck pass intended for T.Y. Hilton with 5:15 left in the game, setting up a game-tying drive for Philadelphia.

Foles took advantage of Luck’s mistake, leading the Birds on a 5-play, 76-yard drive capped by a 6-yard touchdown pass to Jeremy Maclin to tie the game at 27 with 3:25 left, setting the stage for Parkey’s game-winner.

Jack Doyle with the beautiful stretch for the @colts TOUCHDOWN! #MNF pic.twitter.com/8AxXsE6qMj

After the Eagles pulled to within 10-6 on a Cody Parkey field goal with 6:36 left in the first half, the Colts extended the lead back to double digits when Andrew Luck hit Jack Doyle for a 2-yard touchdown strike that marked the second-year QB’s 50th career touchdown pass.

Doyle made the score possible by making an acrobatic dive for the endzone along the right sideline with 1:13 left in the half.

Greg Toler Picked off Nick Foles to End the 1st Half

The Eagles made a bid at a last-minute scoring drive after Doyle’s touchdown when Nick Foles lobbed a bomb toward the endzone intended for Jeremy Maclin. But the Colts’ Greg Toler had other thoughts. Toler made an acrobatic play to pick off the pass, enabling Luck to take a knee on the ensuing play and send Indianapolis into the locker room with a 17-6 lead.

The Eagles were a play away from coming up with a big goal-line stand on the Colts’ first possession, but Indy took the lead when Ahmad Bradshaw scored on a 1-yard touchdown reception from Andrew Luck on 4th-and-goal.

The pass came a play after a 5-yard pass from Luck to Bradshaw that left Bradshaw down at the 1-yard-line. The score capped an impressive 9-play, 72-yard scoring drive.

The Eagles squandered an opportunity to score on the ensuing drive when Parkey missed a 38-yard-field goal attempt with 4:21 left in the quarter.

The Eagles Got on the Board Early

Nick Foles led the Birds on an 11-play, 69 yard drive to open the game, culminating in a 31-yard Cody Parkey field goal that put Philadelphia up 3-0 with 9:52 left in the first quarter.

The Birds ran almost exclusively passing plays out of the gate, with LeSean McCoy getting a mere 2 carries for a combined negative 4 yards on the opening drive.

As ESPN’s Mike Sando pointed out on Twitter, the Eagles wasted no time snapping the ball.

Josh Kaufman, an Indianapolis native who won Season 6 of The Voice, performed the Star Spangled Banner before the game.

Judging by the reaction on Twitter, Kaufman’s rendition was a hit.

Tell you what. @iamjoshkaufman just did a wonderful job with the National Anthem. Impressive.

oh my… @iamjoshkaufman just slayed the national anthem. what a voice! #mnf 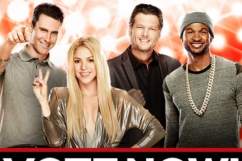 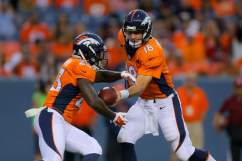