The site said details of the arrest were not immediately clear.

The 29-year-old Phelps was sentenced to 18 months probation after pleading guilty to driving while impaired following an arrest in 2004, when he was 19.

He was also suspended by USA Swimming for three months in 2009 after a photo surfaced of him smoking out of a pipe at a campus party at the University of South Carolina — an incident that prompted Kellogg’s to drop him as a sponsor. 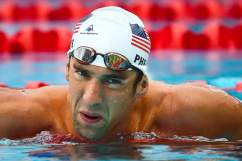