Roger Goodell is the NFL commissioner who is being forced to defend the league’s response to Ray Rice’s assault on his then-fiancee, Janay Palmer.

Goodell had previously admitted that the league had gotten Rice’s punishment wrong. The NFL suspended the former Ravens player for just two games after he was arrested for attacking his then-fiancee, Janay Palmer. Following the criticism, Goodell introduced harsher punishments. Goodell has called the second Ray Rice video “It was sickening.”

1. Mark Cuban Calls Him the ‘Most Powerful Man in Sports’

His net worth is reported to be $75 million. He’s ranked third in terms of net worth among the other commissioners in American sports. He has been described as “the most powerful man in sports” by Mark Cuban.

2. His Salary has Been Scrutinized

Roger Goodell’s salary is $44 million. During his tenure as NFL commissioner, Goodell has been forced to justify his compensation. According to NBC Sports, Goodell officially earns $35.1 million, added to that, he makes a $4.1 million pension payment and $5 million incentive payment.

His wife is Jane Skinner, she’s a former anchor with Fox News. Her father, Samuel Skinner, was a chief of staff for George H.W. Bush. 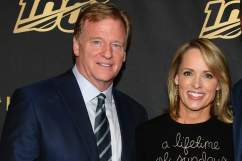 Goodell used to beat up bullies who targeted his gay brother. An extensive Time magazine profile of Goodell indicates the lengths he went to defend his brother, Michael:

“While growing up, Goodell was especially protective of his younger brother, Michael, who was the target of bullies. “Absolutely, he would beat the crap out of people,” says Michael. “Roger was not Atticus Finch.” When Michael Goodell, who came out after college, hears about gay kids committing suicide because of bullying, he reflects on how he could have been one of them. “I was the type who would have been beat up a lot,” says Michael. “It would have been humiliating. What would that have meant if I did survive it. Would I have done drugs? There are all sorts of things you can turn to because of self-hatred and loathing. But none of that was even a possibility, because I had this support around me. So, yeah, Roger is very much a hero figure for me.” During an with an interview with the commissioner, I read Michael’s words to him. Roger Goodell teared up. “Ha,” he says, sniffling, not able to say much else. “That’s the first time I heard that. I didn’t know it had much impact on him.”

5. Goodell Is a Company Man

His career with the NFL began in 1982 when he joined the league as an administrative intern.