Here’s what you need to know about Bradshaw and Bironas.

1. Terry Bradshaw Did Not Work Sunday

FOX broadcaster Terry Bradshaw did not appear on television Sunday following the death of Bironas.

“Terry will not be on today’s edition of FOX NFL Sunday. He flew home to take care of his family,” a FOX spokesman told PFT in a statement.

This is the second time Bradshaw has missed the broadcast this year. He also missed FOX’s broadcast of the Super Bowl after the death of his father.

2. Bradshaw Tried to Stop the Engagement

Bradshaw went on the Jimmy Kimmel show earlier in September and said he tried to stop the engagement between Rachel and Bironas. When the family was on vacation in Hawaii, Bradshaw received word that Bironas was going to ask him for his daughter’s hand in marriage, so, to avoid an awkward conversation, Bradshaw joked how he made Bironas’ life miserable on that vacation.

While Bradshaw joked that he wouldn’t let his daughter marry a football player, Bironas told TMZ that the former Pittsburgh quarterback took it easy on him.

“The truth is,” Rob Bironas told tmz.com, “I knew I was going to marry Rachel when I first met her. It was a waiting game. I bought her ring six months earlier and had it sitting in a safe and I couldn’t wait to put it on her finger.” 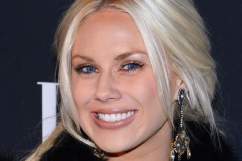 4. Bradshaw Had No Problem Joking About Bironas

Bradshaw often talked about his daughters’ relationship with Bironas. In one interview with WFAN radio last October, Bradshaw told Bironas that he better be nice to his daughter.

“I haven’t said that on the air,” he added. “I don’t want to put any pressure on him. But he knows he’d better be a nice guy.”

And then Bradshaw’s co-host Benigno took a stab at the former Tennessee kicker.

“I’ll tell him you said that,” Bradshaw said.

5. Rachel Is An Aspiring Country Singer

Rachel is currently signed to the Bigger Picture Group and has become an up and coming singer in country.

In Nashville, she co-wrote with singer Jerrod Nieman “What Do You Want”, which became his second top five single.

She is shown in the video above, Rachel stopped by the Pittsburgh Steelers game to sing the National Anthem during the 40th anniversary of the Franco Harris Immaculate Reception at Heinz Field.