Adrian Peterson has already been indicted on child abuses charges, accused of abusing a second child, and put on an obscure list that bans him from team activities. It would have been hard entering this week to imagine things getting worse for Peterson’s off-the-field image.

But that was before the Minneapolis Star Tribune published a bombshell report Monday detailing Peterson’s off-the-field troubles and the shady finances associated with his charitable foundation.

From the Star Tribune:

The 38-page police report details a night of drinking, arguing and sex that involved the running back, two relatives — including Peterson’s brother, a minor — and four women, in various pairs. One of those present, Chris Brown, a Peterson relative who lives with him in Eden Prairie, told police that he paid for the room using a company credit card for Peterson’s All Day, Inc.

As the night wore on, the report says, one woman who said she knew Peterson previously became upset when she saw him having sex with another woman. She started an argument that lasted at least an hour. According to the report, when she told him that she was “emotionally attached to him,” Peterson reminded her that he was engaged to another woman and had a baby.

The next day one of the women filed a police complaint that was investigated for months. Peterson insisted on his innocence and, at one point, arrived to provide evidence at police headquarters through a back door, his face shrouded by the hood of his sweatshirt.

Peterson’s attorney, Peter Wold, told the paper that Peterson passed a polygraph test during the investigation and tested clean for drugs, though it wasn’t clear what type of drugs.

No charges were ever filed, but the revelation of the incident is yet another blow to Peterson’s image and could make the Vikings or other teams even more hesitant to give the All Pro running back a chance to resume his career.

The Star Tribune report also provides some potential answers to a question that has been strangely hard to answer: How many kids does Peterson have?

Peterson has never answered the question directly. But by talking to sources familiar with the situation and looking through court records, the Star Tribune discovered that Peterson has fathered at least six children with at least six different women.

He has fathered six children by six women, and the children live in at least three states — Minnesota, Georgia and Texas — according to court records reviewed by the Star Tribune, and according to sources familiar with his family. He met one of those children, a son, shortly before the boy died last year in South Dakota after being beaten by another man.

Peterson got married earlier this year to the former Ashley Brown, a college sweetheart at Oklahoma who is the mother of one of Peterson’s sons.

The two got married at some point over the summer, though it’s not clear exactly when. The St. Paul Pioneer Press reported that the two were married when a photographer from the paper asked Ashley her name while she and Adrian appeared at a local gala and she told the photog that her last name was Peterson.

Months after their marriage, Peterson was indicted by a Texas grand jury on child abuse charges, prompting outrage from the public that intensified after the Vikings announced they would let Peterson play while the legal process played its way out.

When several prominent sponsors threatened to abandon the team for being soft on child abuse, team officials scrambled to put Peterson on the commissioner’s exempt list, an obscure tool that allowed the team to pay Peterson but bar him from team facilities and functions. 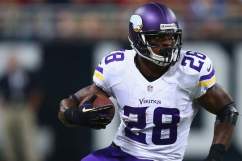