It’s impossible to have a TV on for more than five minutes without seeing Peyton Manning, either in a highlight reel or a commercial. The future Hall of Famer may be the most visible player in NFL history.

Things are different with his wife, Ashley, whom Peyton married in 2001 and who’s largely stayed out of the spotlight. But that doesn’t mean she hasn’t had an enormous impact on Manning’s career. In fact, as Manning explained to Sports Illustrated’s Peter King in 2013, her advice is a big reason why he’s still playing.

Read on for more about Ashley, her background, and her marriage to Peyton.

1. She Convinced Peyton Not to Retire After He Had Multiple Neck Surgeries

After a succession of neck surgeries caused Manning to miss the entire 2011 season and ended up ending his tenure with the Indianapolis Colts, Manning considered retiring rather than going forward at what figured to be less than perfect health.

But as Manning explained to Sports Illustrated’s Peter King, he got some advice from Ashley that proved vital.

“Ashley [his wife] and I actually had those conversations. More than one. Because, you know, you don’t want to embarrass yourself. Because, they’re signing you and people are thinking they’re getting the player they had always seen before. And so, Ashley was the one that was saying, ‘Peyton, you’ve got to try. You’ve got to try.’ With this injury, nothing was happening. Nothing. For weeks. There was no progress. It was so frustrating. And really, I had a peace about it. I had a peace. Because, I had this unbelievable string of health for 20 years—since I was 15 years old as a sophomore in high school. So who was I to complain now that I’m injured? I’ve given it as good a run as I can give it. I’ve got kids now. I had a peace about it. So I didn’t feel like I had to play to get another win or a touchdown. But she’s like, ‘You’ve got to try.’ So I was glad that she pushed me to do it. Once I did it, I was going at it, and then I started seeing a little bit of light there. So, yeah, she was the one who kind of pushed me through it.”

2. She Started Dating Peyton Before His Freshman Season at Tennessee

Ashley Thompson started dating Peyton when Peyton was a blue-chip recruit heading to the University of Tennessee. Ashley had grown up in Memphis, and her neighbor introduced her to Peyton.

She talked about the beginning of her relationship with Peyton in a lengthy 2006 profile in Indianapolis Woman magazine.

She was introduced to Peyton by her parents’ next-door neighbor the summer before Peyton’s freshman year in college.

The neighbor had played football at the University of Tennessee and hosted Peyton on a recruiting trip. The neighbor thought Ashley and Peyton would be perfect for each other. Ashley remembers her first impression of Peyton was that he seemed very genuine

The Mannings got married in Memphis on March 17, 2001 — St. Patrick’s Day. The date factored into Manning’s career 11 years later, when he put off a decision on which team to sign with as a free agent so he and Ashely could celebrate their 11th anniversary in Tennessee’s Smokey Mountains.

From a 2012 Denver Post story on Manning’s pending decision:

Today is 11-year wedding anniversary of Peyton and Ashley Manning. They had plans to spend their anniversary somewhere in the Smokey Mountains area, according to an NFC source.

Which is why when Peyton Manning did throw for the Tennessee Titans this morning, he did so in Knoxville, Tenn.

Manning held his throwing audition for the Broncos (Friday) and San Francisco 49ers (Tuesday) on the Duke University campus of Durham, N.C.

At this point, Manning’s presence in the Smokies has to make the team near the Rockies a tad uneasy.

Ashley and Peyton welcomed twins — a daughter named Mosley and a son named Marshall — in 2011. As this 2012 CBS Denver feature points out, neither Ashley nor the twins were at Peyton’s introductory press conference in Denver, continuing a tradition of staying out of the spotlight. But Peyton told the station his family as excited about the move to Denver.

“I think they’ll be just fine,” he told the station. “It’s a great place to live, so it will be exciting.”

Marshall got some time in front of the cameras in a 2012 interview (featured in the video above) his dad did about teammate Marvin Harrison, and both kids got some time on the field with their dad during training camp this past summer. Watch that video below.

“My entire family keeps me positive and they always support me,” Peyton told People magazine prior to the Super Bowl in February. “They will be coming to town to be with me. Without them, I would not be where I am today. I am very grateful.” 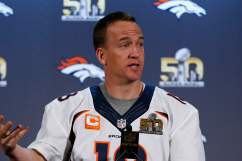 5. Ashley Is Passionate About Charitable Giving

Ashley talked to Indianapolis Woman about a life-long commitment to giving back to those who are less fortunate:

Manning was active in Youth for Christ and also was involved with the Boys and Girls Club, where she tutored every Saturday during high school. In high school, she was honored by being inducted into the Acensus Society, an honor society for outstanding charity involvement.

As Peyton’s career has taken off, so have the Mannings’ charitable endeavors. The couple’s giving is highlighted by the fundraising they’ve done for the children’s hospital at St. Vincent’s Hospital in Indianapolis, which bears Peyton’s name. The video above has a report from the Mannings’ fundraising gala in 2009, which included a musical performance by Darius Rucker.