Nearly a month after announcing in an awkward news conference that the NFL would make changes to its personal conduct policy, Goodell held another news conference Wednesday in New York City discuss potential changes to the way the league conducts its investigations.

Goodell said the league “educated” the owners and executives during meetings Wednesday on changes to the league’s social responsibility policies. The owners debated whether to use outside experts when deciding how to discipline to players accused of wrongdoing and whether to wait for law-enforcement investigations to run their course before issuing discipline.

Discussion on changes has come about after the league’s disastrous handling of the Ray Rice debacle and other domestic-violence-related issues. Carolina Panthers defensive end Greg Hardy was allowed to play despite being convicted by a North Carolina judge of assaulting ex-girlfriend Nicole Holder, only to be placed on the commissioner’s exempt list amid public outcry that the Panthers and the league had turned a blind eye to the seriousness of the charges.

Hardy has appealed for a jury trial and is awaiting that trial.

As the NFL Network’s Ian Rappoport tweeted, Goodell said he didn’t detect disagreement among the owners about his handling of the Rice situation.

Asked if the owners detected disagreement on how he handled Ray Rice, Goodell says, “No, I’ve been very open about where we made mistakes.”

The commissioner declined to say whether he’d been interviewed by Mueller.

Goodell declines to say whether he's been interviewed by Robert Mueller for investigation.

League officials discussed whether investigations should be as dependent as they’ve been on law enforcement as they’ve been in the past, and what options the league can take when it comes to disciplining players who’ve been accused of wrongdoing.

Wednesday’s press conference came less than 12 hours after Adrian Peterson — one of the biggest villains in the NFL’s public relations disaster over the past several months — made his first court appearance after being indicted by a grand jury on September 12 on a child abuse charge in Texas.

Peterson’s lawyer, Rusty Hardin, asked Judge Kelly Case for a trial date in mid-November so that Peterson could move on with his career. Case set a tentative date of December 1 for the trial to start. 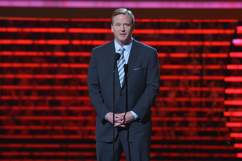