Tuesday night’s American League Wild Card game between the Royals and A’s produced a lifetime’s worth of memories for some Royals fans, whose team hadn’t appeared in a playoff game in 29 years. And no moment was more memorable than Salvador Perez’s walk-off single in the bottom of the 12th.

Here’s what you need to know about the Wild Card hero:

1.He Had Been 0-for-5 Before the Game-Winning Hit

Perez hadn’t exactly been having a game to remember before he came to the plate in the 12th. Up until that point, he was 0-for-5 and had struck out in the bottom of the eighth with the tying run on base.

All was forgiven, though, with one swing of the bat. 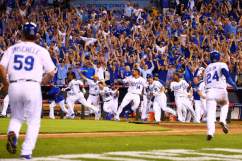 2. He’s From the Same Venezuelan City as Felix Hernandez

Perez grew up in Valencia, Venezuela — a city that has produced a long line of current and former Major Leaguers highighted by Mariners ace Felix Hernandez.

Perez had the honor of being the last player to catch Yankees icon Mariano Rivera in an All-Star Game when he did the honors in 2013 at Citi Field in New York.

4. He Hit His 1st Career Homer off of Max Scherzer

Perez hit his first career homer on August 29, 2011 against the Tigers’ Max Scherzer, who would go on to win the Cy Young Award a year later. The homer came in the fourth inning of a 9-5 Royals win.

The 24-year-old Perez has established himself as one of the best hitting catchers in baseball. He’s hit 11 or more homers in each of his three full seasons in the big leagues, with the total increasing from 11 in 2012 to 13 in 2013 and a career-high 17 in 2014. 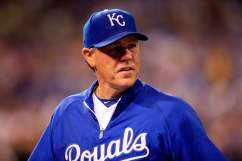 Ned Yost & Yordano Ventura: The Tweets You Need to Read

Read More
Baseball, MLB
Salvador Perez was the hero in a game for the ages Tuesday night. The Royals catcher drove in the winning run with a single in the bottom of the 12th.