The Major League Baseball postseason, loaded with one-run games and late-game drama, had already been one of the craziest in recent memory heading into Game 5 of the NLCS between the Cardinals and Giants.

But things got even more dramatic when Travis Ishikawa hit a 3-run walk-off homer in the bottom of the ninth to win the pennant for the Giants. You can watch the full-length video of the homer above and/or check out a snippet here:

The N.L. pennant is the third in five years for San Francisco, which finished in second place in the N.L. West and needed a Wild Card win over the Pirates just to advance to the division series.

The Giants open the World Series against another Wild Card team — the A.L. champion Royals — Tuesday in Kansas City.

Check out a photo gallery of the homer and subsequent celebration here. 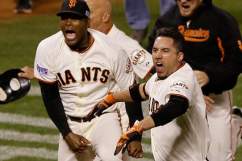 Giants vs. Royals in World Series: 5 Fast Facts You Need to Know