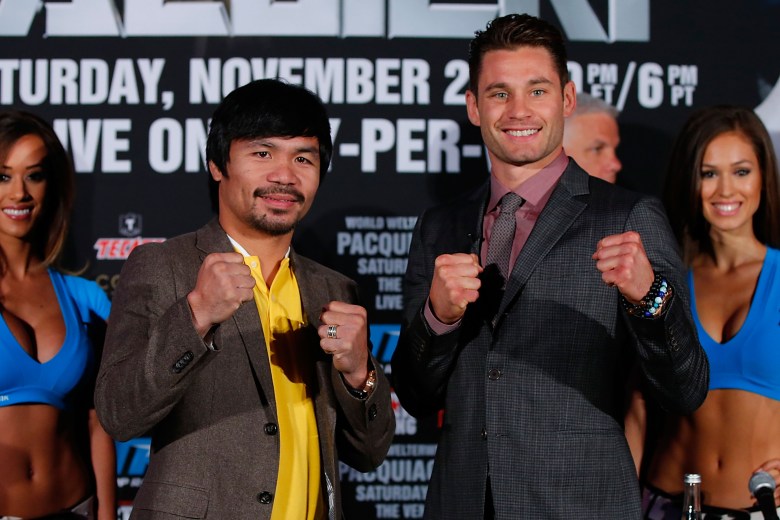 Long Island’s best-kept-secret Chris Algieri will be thrust into the limelight on November 22nd when he faces off against pound-for-pound great Manny Pacquiao in Macau, China on HBO’s Pay-Per-View Boxing.

Underdog Algieri (20-0, 8 KOs) has exuded so much confidence in the lead-up to the bout, that he has convinced many that he may actually have what it takes to pull off what would be one of the biggest upsets in recent history by defeating the Filipino southpaw superstar.

Come Saturday, the 16-to-1 long shot will have a 36-minute opportunity to ensure that all those who are asking “Chris-who?” will never forget his name.

Here is what you need to know about the undefeated self-proclaimed King of New York:

Much of the pre-fight media attention surrounding Algieri has been centered on the handsome 30 year-old’s wholesome, boy-next-door demeanor.

Born and raised in Huntington, Long Island, the New Yorker is shown on a recent episode HBO’s 24/7 still living in his parent’s basement, where he just got his very own television three months ago! Of course this may all soon change after his encounter with Pacman, which comes along with a reported purse of over $1.5 million, plus a percentage of the Pay-Per-View receipts.

Algieri holds a Bachelor’s degree in Health Care Management and a Master’s degree in Clinical Nutrition. Once his boxing days are behind him, Algieri expects to continue with a career in health care.

“Medical School is the next step in my career,” Algieri said on a recent media conference call. “There is no doubt about that. My mind is still hungry and I want to continue my education.”

Articulate, good-looking, and affable? All this adds up to a marketing boon for Algieri promoter Joe DeGuardia, who sees a bright future for the rising star.

“Chris is someone,” DeGuardia told the New York Daily News, “who brings something completely different to the table in terms of marketability that no other fighter can bring.”

Getting past Pacquiao on Saturday could be the final step in cementing Algieri’s status as one of the sport’s next generation of superstars.

2. Before Coming to Boxing at a Late Age, Algieri Was a World Champion Kickboxer

Chris Algieri came to the sport relatively late compared to most modern-day fighters who claim to have been “born in the boxing gym.” With absolutely no amateur boxing experience and only 20 pro fights under his belt, Algieri’s record looks suspiciously thin next to Manny Pacquiao’s illustrious 56-5-2 with 38 KOs. But, that’s not to say Algieri comes into Saturday’s bout as a novice.

He received his first taste of combat sports learning Chinese Kempo at the age of 9, going on to earn a second-degree black belt.  The former all-state high school wrestler took up amateur kickboxing while in college, turning professional at the age of 19 and amassing an unblemished record of 20 pro wins, including two world championships.

“As I closed my kickboxing career and did everything I wanted to do, it was a logical decision to keep going, because I wasn’t done fighting yet,” Algieri told USAToday.

“I box because I love to fight. I enjoy the training, I enjoy fight night, it’s the best feeling in the world to be in that ring, and to win.”

And win is what he did. His 10-0 record against entry-level competition earned him a spot in Joe DeGuardia’s stable at Star Boxing Promotions.

Under the Star Boxing banner Algieri built a loyal fanbase by fighting eight of his next nine bouts in his hometown’s Huntington Paramount Theater.

3. Algieri Upset ‘The Siberian Rocky’ to Earn Himself Match Against Pacquiao

Chris Algieri’s tenure at the Paramount Theater culminated with a win over Emmanuel Taylor, earning him a 19-0 record and his biggest fight to date, a challenge for Ruslan “The Siberian Rocky” Provodnikov’s WBO light welterweight title.

Algieri entered the ring for the June 14th, 2014 fight at Barclay’s Center in Brooklyn as a heavy underdog facing off versus the dangerous Russian.

The cheering hometown crowd’s hope for an Algieri upset quickly turned bleak when he was dropped twice in the first round and found himself with a half-closed eye and a 10-7 deficit to dig himself out of.

But somehow Algieri found it in him to piece together 11 rounds of brilliance that were enough to secure him a split decision over one of today’s most feared fighters, a spot on the sport’s world stage, and eventually, a date with living legend Manny Pacquiao at The Venetian Macao.

Asked after the fight by HBO’s Max Kellerman what he thought he proved with his victory, he said “I showed the boxing world who ‘Chris Algieri’ is.”

Algieri used his $100,000 winnings from the fight to pay off his student loans.

4. He Was Forced to Give Up His Newly-Won WBO Title

Despite beating Provodnikov to win the WBO title, when Algieri enters the ring on Saturday it will not be as a champion.

Once the matchup between Algieri and Pacquiao was finalized, the World Boxing Organization (WBO) announced that Algieri would be required to relinquish his WBO light welterweight title without having a chance to defend it.

The belt taken from Provodnikov was in the 140 division and by moving up to the 147 pound welterweight limit to face Pacman, the Puerto Rico-based WBO argues, Algieri vacated the title.

This was an unfavorable and unexpected decision for Algieri who, with a win over Pacquiao, would have been a two-division title holder.

5. Algieri Is a Slick Boxer

Algieri shows as much intelligence inside the ring as he does outside it. He has developed a slippery, awkward style that effectively exploits his unusual height and reach to his advantage.

Preferring to carry out his work from the outside, Algieri uses his superb foot speed to circle and dodge his opponents while landing long jabs and straight rights from a safe distance.

“Every time I enter the ring,” he said at a recent public appearance, “I look to improve and perfect my master-boxer style of fighting; utilizing the space inside the ring to my advantage. Good defense is the key to preserving my handsomeness.”

With only eight knockout wins to his name, Algieri brings limited punching power and instead has relied on taking his last 11 of 12 opponents the distance to win on points.

However, Algieri has not completely closed the door on putting Manny Pacquiao to sleep.

“If you can hit a man, you can hurt him,” Algieri said. “If you can hurt him, you can stop him. I’ve had that mentality my entire career. I don’t care who I’m fighting. I think guys are underestimating my speed a little bit, but I don’t necessarily have to beat his speed or match his speed because timing beats speed.”

Saturday night Chris Algieri will find himself at the crossroads of his career. Stepping into the ring 8,000 miles from home, with the odds stacked in the great Manny Pacquiao’s favor might make anyone nervous. But probably not Chris Algieri.

“I’ve been the underdog many times before in the past, so I think if I was the favorite I’d feel more uncomfortable.  This is home for me.”