Eli Manning wracked up plenty of accomplishments at Ole Miss, leading the Rebels to a 10-3 record and a Cotton Bowl victory in 2003, winning the Maxwell Award that year as the nation’s best player, and finishing third in voting for the Heisman Trophy.

Manning did plenty for the Rebels, who, until their resurgence this year, hadn’t seen close to the type of success that they achieved during Manning’s career after he left.

But aside from helping to put Manning in position to be the No. 1 overall pick in the 2004 NFL Draft, Manning’s alma matter gave him something he wouldn’t have had at any of the other school schools that recruited him out of high school: The opportunity to meet Abbby McGrew.

Abby was Eli’s college sweetheart in Oxford. The two were married in 2008 and are the parents of three young girls.

Here’s what you need to know about Abby and her relationship with Eli.

1. Abby Grew Up in Nashville

Eli and Abby Manning attend the screening party for The Real Housewives of New York City in 2008. (Getty)

Abby was born in Nashville and graduated from Brentwood Academy, a prestigious suburban prep school. When news broke of Abby’s engagement to Manning, there was no shortage of excitement and no shortage of speculation about whether the couple would get married in Nashville.

Here’s how a blogger on the Brentwood page of the Fun Times Guide summed it up:

Nashville has a few venues grand enough for NFL royalty, but many country music stars are married on private farms, away from the public eye.

I would suggest Nashville’s new Schermerhorn Symphony Center or perhaps even Cheekwood–the botanical garden and art museum where the creme-de-la-creme Swan Ball is held each spring.

The Mannings ended up getting married at a resort in Mexico, but Nashville residents at least got a glimpse of the couple attending church on Eastern Sunday in the area. 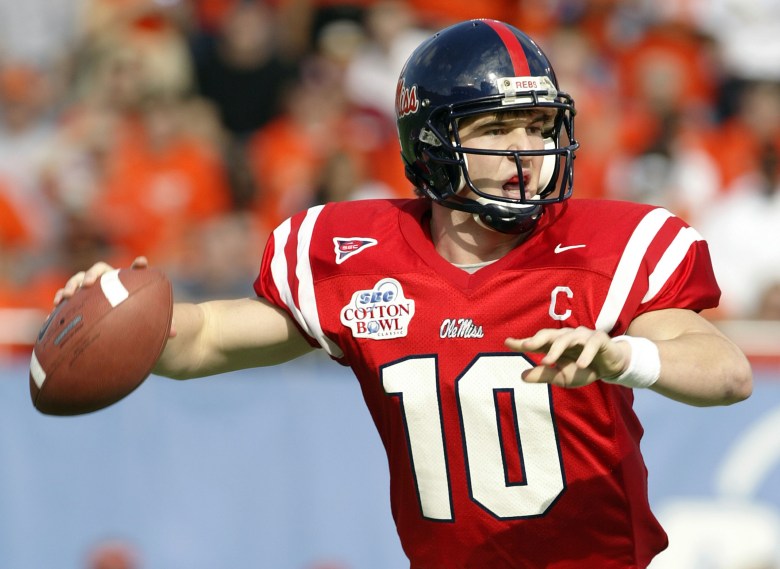 Eli Manning looks for a receiver during the 2004 Cotton Bowl, in which Manning led Ole Miss to a 31-28 win over Oklahoma State. (Getty)

The Mannings met at Ole Miss when Eli was a junior and Abby was a freshman. Nicole Wroten wrote about their courtsthip in the September 2008 issue of St. Charles Avenue, a magazine that covers the “activist and society scene” in Manning’s home town of New Orleans.

The couple met in the spring of 2002 at the University of Mississippi while he was a junior and she was a freshman. The two dated through the spring semester and became an official couple the following fall as Eli began the 2002-’03 football season as quarterback for the Ole Miss Rebels.

Eli and Abby Manning at the Whitney Contemporaries Art Party in 2008. (Getty)

From the St. Charles Avenue article:

In 2007, Eli knew he wanted Abby to be his wife. During a trip home to New Orleans for Mardi Gras, he designed an engagement ring at Adler’s. A few weeks later, they were slated to take a trip to see her family in Nashville. Abby thought he might propose to her then but Eli just couldn’t wait that long. On a simple Tuesday evening they were spending together, Eli turned toward Abby and got down on his knee. Abby was taken aback at first but breathlessly said “Yes!” He presented her with a gorgeous Adler’s emerald-cut center stone ring, flanked by two emerald-cut diamonds on either side.

The Mannings tied the knot at a ceremony at a resort in Mexico on April, 19 of 2008, just months after Eli led the Giants to the first of two Super Bowl titles with him under center.

The New York Daily News reported extensively on the wedding, which featured Eli’s brothers Peyton and Cooper as groomsmen.

About 60 loved ones flew to Mexico to join Manning and his bride for the intimate ceremony at the One & Only Palmilla, a swank resort along the Sea of Cortez on the Baja Peninsula.

Manning, 27, and McGrew, 24, exchanged vows while standing on a platform in the sand as waves crashed over rocks behind them.

The bride, carrying a bouquet of white roses, made her entrance through a wrought-iron gate and walked down the aisle to an altar covered in pink wildflowers.

McGrew looked splendid in a strapless white gown with gold embroidering and a large bow and short train in the back.

As Eli explained to People.com just before Father’s Day in June, he often badly out-numbered by women — something he doesn’t mind. (Click “play” on the video above for a slideshow of the family.)

“My wife has two sisters, then her mom comes and then it’s six on one,” Manning, 33, told reporters at the Oral-B and March of Dimes Power of Dad event on Wednesday.

Despite being outnumbered, Manning truly enjoys it and looks forward to being spoiled by his girls on Father’s Day. While he’s not sure what to expect, he is sure Abby has something up her sleeve.

“Now that Ava’s 3, I’m getting it a little bit,” he says. “My wife recorded something the other day of her saying, ‘Happy Father’s Day, Daddy. I love you.’ It’s fun to have those moments.”

Eli told the New York Post that he plans to move to the suburbs of New Jersey with his growing family.

He isn’t usually very public about his family, but he told the NY Post:

When we have the whole family together, maybe bath time when I have both kids in the bathtub and they start splashing each other and making each other laugh. That usually gives me my biggest smile — when I see both my girls interacting with each other.”