This weekend, the boxing world turns its attention to the “Pearl of the Orient” as Manny Pacquiao (56-5-2 38 KOs) and Chris Algieri (20-0, 8 KOs) square off at The Venetian Macao in China.

Macau has become a second home for Bob Arum’s Las Vegas-based promotion company Top Rank– this being the company’s third fight there this year. Arum intends to continue bringing Pay Per View-level megafights on regular basis to the Asian gambling capital, with Pacquiao fighting there once a year.

”Boxing is doing well in Macau. It’s something new for them and we give them a presentation they haven’t seen before,” Arum told the AP. ”It’s the same as in Vegas, except it’s on steroids.”

Here are five facts you need to know as we head to the “Monte Carlo of the Orient” for the upcoming rumble:

1. Chris Algieri is a Little-Known Club Boxer From Long Island

30 year-old club-boxer Chris Algieri was virtually unknown in the boxing world as he stepped into the ring for the biggest fight of his life in June 2014 at Barclay’s Center in Brooklyn against one of today’s most feared fighters, Ruslan “The Siberian Rocky” Provodnikov.

Algieri’s role that night was simple, a sacrificial tune-up for the rabid Russian, designed to showcase Provodnikov’s skills in preparation for his own future fight against the legendary Manny Pacquiao.

But Algieri had different designs.

With a hometown crowd behind him, the former champion kickboxer was able to weather two first-round knockdowns and a bout-threatening swollen-shut eye to put together a boxing masterclass that left the brawling Russian swinging at air.

The effort was enough to earn himself a split decision, Provodnikov’s WBO light welterweight title, and a future showdown with eight-division title holder Manny Pacquiao.

2. The Odds Are Stacked Against Algieri 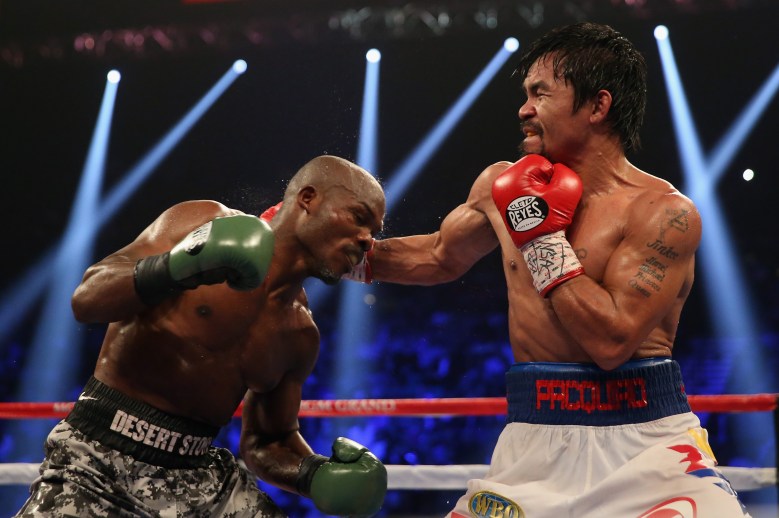 If Chris Algieri was an underdog going into the Provodnikov fight, then taking on the 8-1 favorite Pacquiao in his own backyard must be a sure-fire recipe for defeat.

With no amateur experience to fall back on, Algieri has been wisely protected and brought up slowly through the ranks by his promoter Joe DeGuardia.

Regularly fighting out of the 1500-capacity Paramount Theater in his Long Island hometown of Huntington, Algieri has mostly faced local low-level fighters designed to further his unblemished record. Many fans consider him untested and unworthy of fighting a great like Pacquiao.

On the other hand, Manny Pacquiao has been a mainstay on pound-for-pound and best-of lists for over 10 years. With epic battles and wins against the likes of Oscar De La Hoya, Juan Manuel Marquez, and Erik Morales, “The Mexicutioner” has been a marquis-level draw for most of his career.

Regardless of what observers say, Algieri has been exuding self confidence in the build-up to the fight.

“I’m very excited,” Algieri told Newsday. “The team is very positive with all the energy in camp and the positivity we’re experiencing from people here in Macau. It seems like it’s flowing into my entire camp, and we are performing above and beyond.”

3. The State of Manny 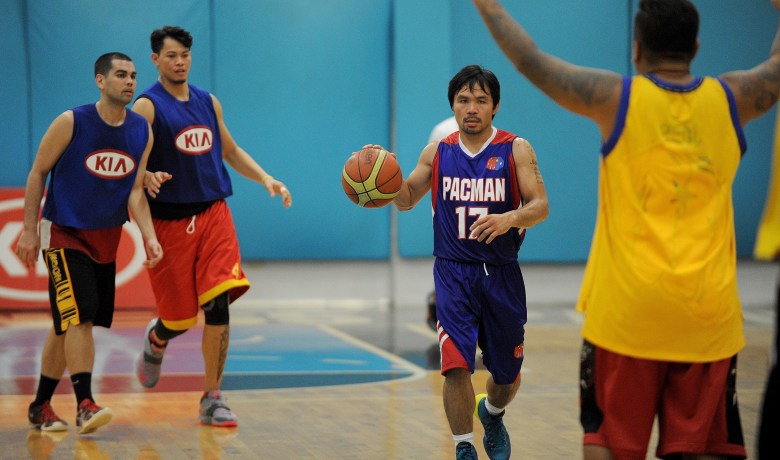 Although 35 year-old Pacquiao is coming off two wins, against Brandon Rios and his rematch against Tim Bradley, he has not been without his own critics.

Prior to the previous two fights, Pacquiao was leveled with a one-punch knockout by Juan Manuel Marquez and defeated by Bradley, and some wonder if his other job-titles and pursuits (congressman, pro basketball player, singer, gameshow host) and tax problems are taking his attention away from the sport.

Observers also point out that Pacman has not had a knockout win since his sensational stoppage of Brit Ricky Hatton back in 2009. Some attribute the knockout drought to dwindling power or lack of killer instinct, others to his advancing age and wear.

Whatever the reasons, Pacquiao will be looking to make a statement against the young up-and-comer on Saturday and show that he still possesses the power and hunger to stay at the top of the sport.

4. Styles Make Fights: The High-Volume Puncher Vs. The Slick Boxer 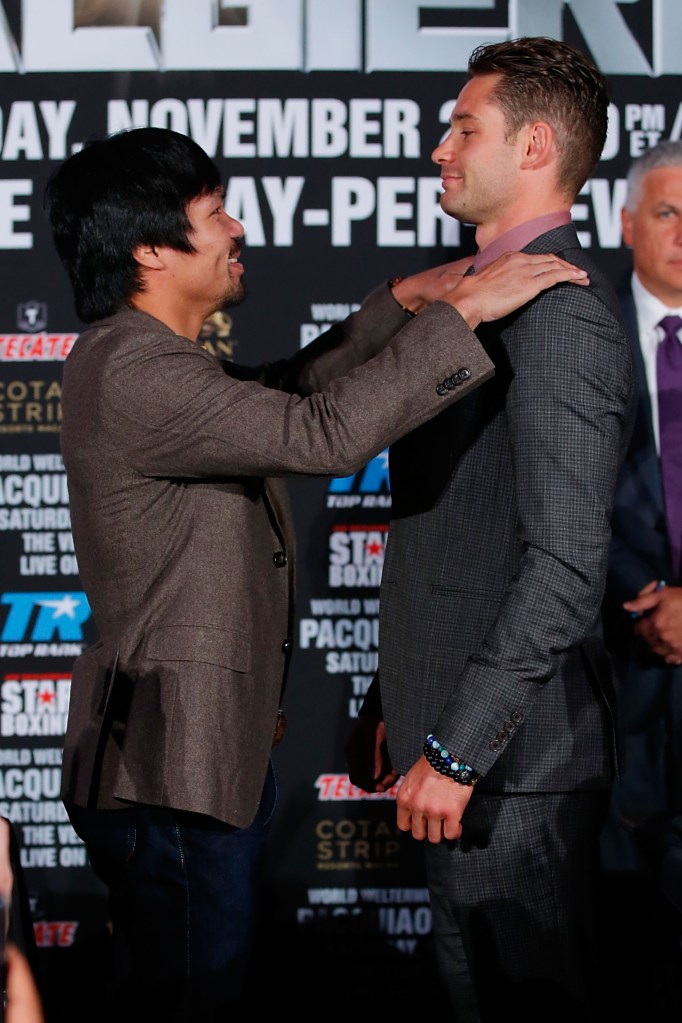 One of the biggest factors in Saturday’s fight will be the height differential. Standing 5’10” Algieri has a 4-inch advantage over the diminutive southpaw, and a 5-inch reach advantage to Pacquiao’s 67″ inches.

Algieri is the classic slick boxer. A practitioner of the sweet science of ‘hitting and not being hit,’ he has excellent ring mobility and upper-body movement, and uses his height and reach to control the gap and keep his opponents out of range.

Algieri throws his single punches singly and in 2 or 3-punch combinations. Although he favors working from the outside, where he can circle his opponent and land punches from a safe distance, he is also adept at coming in to smother his opponents after landing a punch, and quickly darting out of range before he can be countered.

Manny Pacquiao has a high energy, fan- pleasing style. Compared to Algieri’s ‘punch-smother-dart out’ method, he uses his incredible speed in a ‘dart in-punch-dart out’ approach; usually entering and exiting the punch-zone from different angles.

Pacquiao uses his superior hand-speed to overwhelm his opponents with high-punch outputs and combinations, and he is a master in exploiting angles and getting at opening in opponents’ defense.

He possesses and devastating lead left-hand and, since teaming up with trainer Freddy Roach, has developed an equally shattering power right hand. 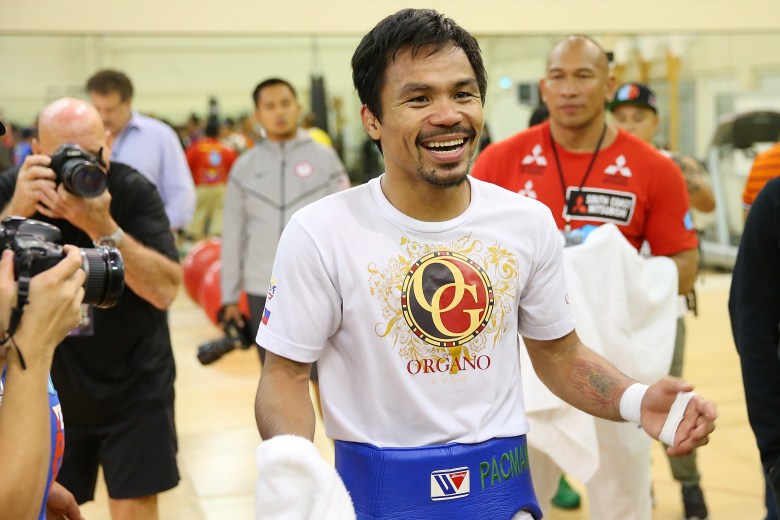 Expect a largely tactical affair on Saturday with the fight likely going the distance.

Chris Algieri cannot be intimidated by the bigness of the event and will have to execute his fight plan flawlessly if is to walk away with the upset.

Algieri should do what he does best, get on his bicycle and use his jab to keep Manny outside while maintaining a high level of activity.

Pacquiao has shown to have problems dealing with opponents who use lateral movement, so Algieri should keep the fight at a high pace and keep from being bogged down.

Manny Pacquiao must, also, simply do what he does best. That is, keep constant pressure on Algieri and exploit angles to keep him on guard.

Expect Manny to target the body in the early rounds in an effort to slowdown the fleeted footed Algieri and go headhunting in the second half in search of a stoppage.

Both fighters enter the ring on Saturday with plenty to prove. Algieri has been hearing the naysayers since narrowly beating Provodnikov five months ago, and he is ready to quiet them and prove that his indeed the real thing. If he can take the fight, Algieri, with his good looks and charisma, could be in line to be one of the biggest stars in the sports.

For Pacquiao too, this will be about quieting the critics and demonstrating that he still has the stuff that has made him a guaranteed first-ballot Hall of Famer.

Win or lose, Pacquiao’s legacy in the sport has been cemented. But a win against the up-and-comer would go a long way to securing him the Mayweather matchup that boxing fights have been clamoring for.

In this timeless battle of youth versus experience, who will win? Time will tell.

On the undercard that night:

Read More
5 Fast Facts, Boxing, HBO, HBO Sports, Sports
What you need to know as Manny Pacquiao and Chris Algieri square off at The Venetian Macao in China this weekend