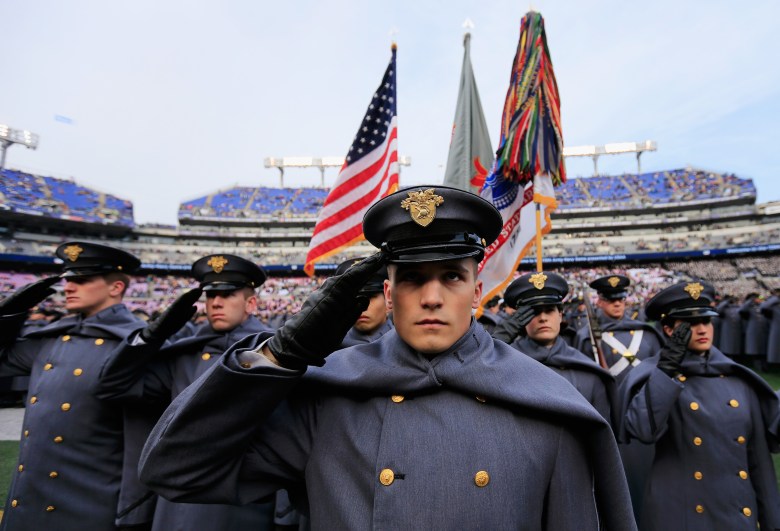 Navy held on for the victory as they beat Army for the 13th consecutive time with a 17-10 victory.

Navy quarterback Keenan Reynolds rushed 26 times for 100 yards and a touchdown, as well as passing for 77 yards and another touchdown.

Almost all of Army’s yards came on the ground, with Larry Dixon’s 90 yards on 14 carries leading the way.

Army’s special teams was the team’s biggest contributor, scoring their only touchdown on a blocked punt.

Army’s defense was not enough to get its team the win, despite holding Navy to 285 yards. Army picked up a total of 235 yards.Navy only had one more first down than Army with 16, and each team had one turnover.

Ken Niumatalolo is the first Navy coach to win his first seven games against Army.

Go here for the full box score and read on for a recap.

Army Scored the Game’s First Touchdown on a Blocked Punt

The touchdown was scored by Xavier Moss.

Navy Gets on the Board at the End of the Half

Navy’s first touchdown of the game came on a nine-yard pass from Keenan Reynolds to Jamir Tillman with 18 seconds left in the half.

Both Defenses Were Strong in the First Half

Both teams picked up only six first downs in the first half with Navy totaling 124 yards and Army picking up only 93.

However, both teams found some way to score, with Army’s touchdown coming on a blocked punt and Navy’s being a more traditional pass.

Navy scored its second touchdown of the game on a one-yard run by Reynolds.

Army has a big 10-point hole out of which they must dig if they want to win this game.

Navy’s Will Anthony recovered the fumble by A.J. Schurr at Navy’s 38 yard line. The lack of a score all but completely puts a win out of Army’s reach.

Army Got it Back by Recovering Navy’s Fumble

Kennan Reynolds fumbled the ball at Navy’s 21-yard line. It was recovered by Joe Drummond.

Since then, Navy has won 13 straight contests and in the process has taken a 59-49-7 series lead. 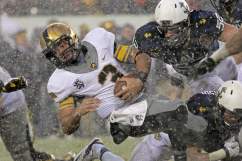