Brad Nessler will handle play-by-play duties for the Sugar Bowl between Alabama and Ohio State. (Special)

Veteran announcer Brad Nessler will take over play-by-play for the “SEC on CBS” full-time beginning in 2017.

Nessler will replace longtime announcer Verne Lundquist, who will see 2016 as his final season in the booth.

Alongside Nessler, handling the color analysis, will remain Gary Danielson, who worked with Nessler nearly 20 years ago for ABC. The “SEC on CBS” sideline reporter will be Allie LaForce.

According to the CBS Sports chairman Sean McManus in the release:

Verne has set the standard for college football broadcasting. Together with Gary Danielson, he has played a key role in making the SEC on CBS the highest-rated college football package in America. After an incredible 17 years, he will be handing the reigns off to Brad, who in his own right is highly acclaimed and respected as one of the premier play-by-play broadcasters in the business. I am very pleased that Verne will still have a prominent role in our college basketball and major championship golf coverage. We are fortunate to have one more football season to appreciate Verne’s one-of-a-kind storytelling as we pave the way for a seamless and smooth transition to Brad.

Here’s what you need to know about Nessler and his move to CBS:

1. Nessler Will Join CBS in 2017 to Call SEC Football Games

For college football, Nessler worked beside Gary Danielson (who will be his booth partner again at CBS), Bob Griese, Paul Maguire and Erin Andrews before being paired with his current team of Blackledge and Rowe.

Nessler will call select games for CBS in 2016 on days where the network will carry two SEC contests.

It has been reported Nessler’s salary is about $300,000 per year, though it hasn’t been confirmed. It is unclear what he’ll make when he becomes in the full-time SEC on CBS play-by-play man after next season.

According to the CBS release, Lundquist will remain with the network to work college basketball and golf. 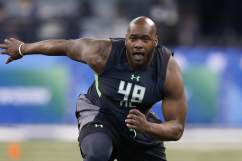 Nessler cut his teeth in the announcing business in 1980 when he began doing play-by-play for Georgia Tech basketball games for WGST-Radio in Atlanta. In 1982, he started to call Atlanta Falcons radio broadcasts. In 1988, he left Atlanta for Minnesota, where he continued his play-by-play career with the Vikings for WCCO radio.

In 1990, Nessler joined CBS to call college football as well as men’s and women’s college basketball games. He also did a some NFL work and was a studio host for the 1992 Winter Olympics in Albertville, France.

He has also done ACC football and basketball games for Raycom/Jefferson Pilot and WLAF games for the USA Network in 1991-92.

He was also part of ESPN’s Monday Night Football doubleheader which opened the 2010 season. Nessler called the late game between the San Diego Chargers and Kansas City Chiefs.

3. Nessler Has Been Part of Many Memorable Calls

But with any long career, there are bound to be some slip-ups. 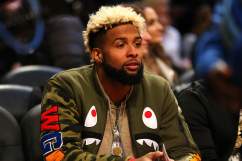 4. Nessler is a Legend in Minnesota 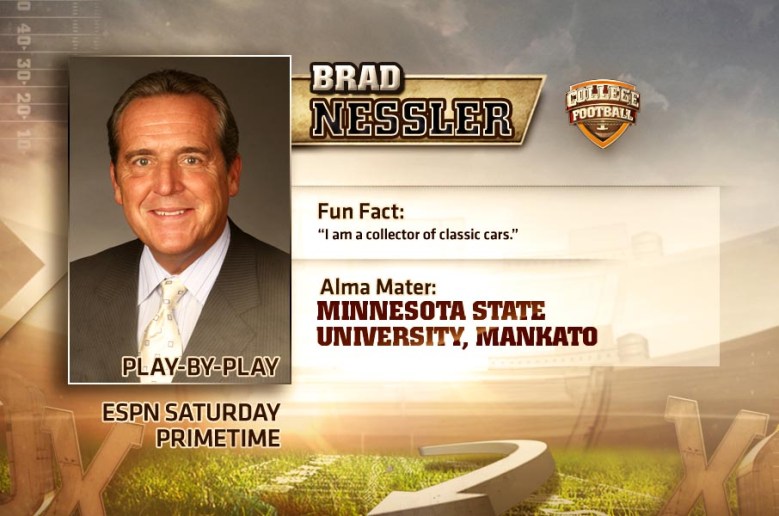 Nessler, 58, was born in St. Charles, Minn., and is a graduate of Minnesota State University, Mankato.

Each summer, Nessler returns to his hometown to host a charity golf tournament named for his father, Bob. All the proceeds of The Nessler Memorial go toward cancer research.

Nessler is in the Minnesota Broadcasters Hall of Fame. He was inducted in 2010.

Nessler is married to wife Nancy and they have one daughter.

If you play Electronic Arts Sports NCAA Football and/or March Madness video games, you have undoubtedly heard Nessler before. He lends his voice to the uber-popular games in his familiar role as play-by-play announcer.

But as you gamers know, EA didn’t make a college football game this season due to the ongoing battle between the NCAA and student-athletes over the use of the players’ likenesses allegedly without their permission – and without compensation.

There have been reports that the players want the game back. 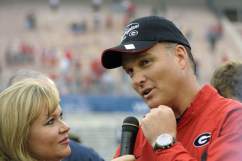