After four mostly sub-par seasons as head coach of the Michigan Wolverines, Brady Hoke was fired on Tuesday afternoon. Hoke who compiled a 31-20 overall record and went 18-14 in Big 10 Conference play was hired because of his previous success as a recruiter, team-builder and head coach – building up Ball State’s football program from 2003-08 and San Diego State’s from 2009-10 before taking the Wolverines job – had seen his team decline in each of his four years at the program.

Source has confirmed that Brady Hoke has been fired from post as #Michigan's head football coach. Team to be briefed during 3pm meeting

Outside of the Sugar Bowl victory, Hoke’s team routinely performed poorly in big games. The Wolverines were 0-7 in road games against rivals Ohio State, Michigan State and Notre Dame during his time in Ann Arbor.

Due to Hoke being fired before completing the six years on his contract, he will be owed $3 million.

Speculation has already occurred as to who will be the man to replace Hoke. Most believe that Michigan’s interim athletic director Jim Hackett, who took over the role vacated when Dave Brandon resigned from the position on Oct. 31, will be the man that make’s the program’s crucial decision. After Saturday’s Michigan vs. Ohio State game, which was an ABC telecast, former Wolverines quarterback Brian Griese commented on Michigan’s situation, giving his full support to Hackett:

“Jim Hackett, who I fully anticipate is going to be the man who hires the next head coach, potentially for Michigan. Is (Hackett) the right guy to be in that position? I think he is.”

The program will most likely go with a more high-profile hire this go-around. The name that has been linked to the job for well over a year is current San Francisco 49ers head coach Jim Harbaugh. LSU head coach Les Miles has been linked to the job in the past, but is adamant about staying in Baton Rouge. The rising name is current Mississippi State head coach Dan Mullen, who is coming off a 10-2 year with the Bulldogs.

Regardless of the direction the program takes, the perception is that Michigan must aim much higher to fill their vacancy this time around, and bring in an established, strong personality, but a friendly one who could make up the gap in recruiting that Hoke failed to accomplish during his tenure.

To add insult on to injury: former Wolverines head coach Rich Rodriguez who Hoke replaced, won Pac-12 Coach of the Year as head coach of the Arizona Wildcats.

Oh, the irony! On day when Michigan expected to fire Brady Hoke, his predecessor, Arizona's RichRod, is named Pac12 coach of year 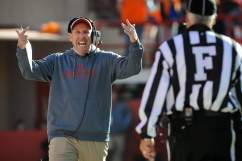