Jon Lester has won two championships with a team that was starved for them throughout most of the 20th century.

Next up: Trying to win a title with a team whose title drought has already hit the 100-year mark.

Jon Lester, expected to be the first domino to fall in baseball’s free agent market, turned down the Red Sox early Wednesday morning and signed a 6-year, $155 million deal with the Cubs, multiple outlets reported. The deal, which has yet to be officially announced because Lester hasn’t passed a physical, has a vesting seventh year.

The move comes after two months of negotiations between Lester’s agents and a host of teams that included the Giants and Dodgers, in addition to the Cubs and Red Sox. Chicago and Boston were reported to be the final two teams in on the sweepstakes. 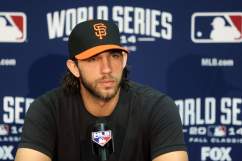