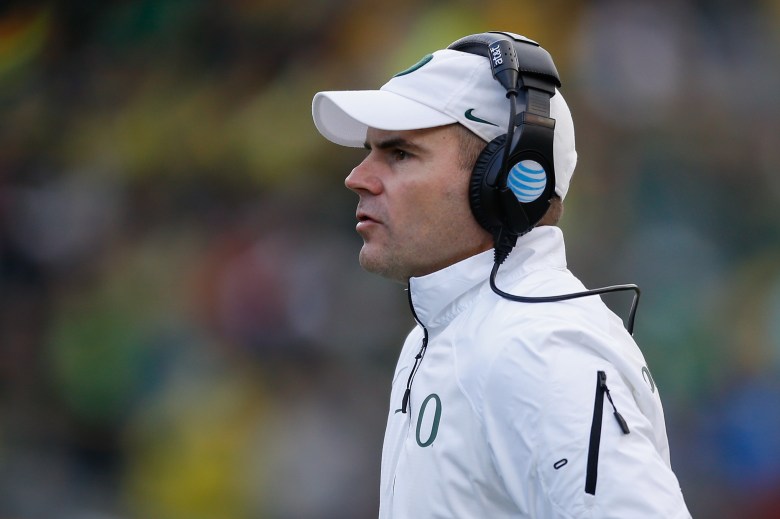 On January 20, 2013, Mark Helfrich became the 32nd head coach in the history of the Oregon Ducks football program.

Helfrich considered the Oregon Ducks job the pinnacle of his coaching career — his dream job. At his introductory press conference, he made sure it was understood how he appreciated the opportunity to have his dream scenario come true:

“Coaching at Oregon is the pinnacle for me. I kind of fell in love for being a coach when I played at Marshfield in Coos Bay for Kent Wigle and just seeing the influence he had on thousands and thousands of young people. It’s an unbelievable honor being around our kids every day.”

Helfrich concluded his 2nd season as head coach of Oregon since the program’s most successful coach — Chip Kelly — left the Ducks for the NFL to take the Philadelphia Eagles head coaching job, and has the Ducks poised to play the defending national champion Florida State Seminoles in college football’s 1st playoff game.

1. Helfrich is a Native Oregonian and Grew Up an Oregon Fan 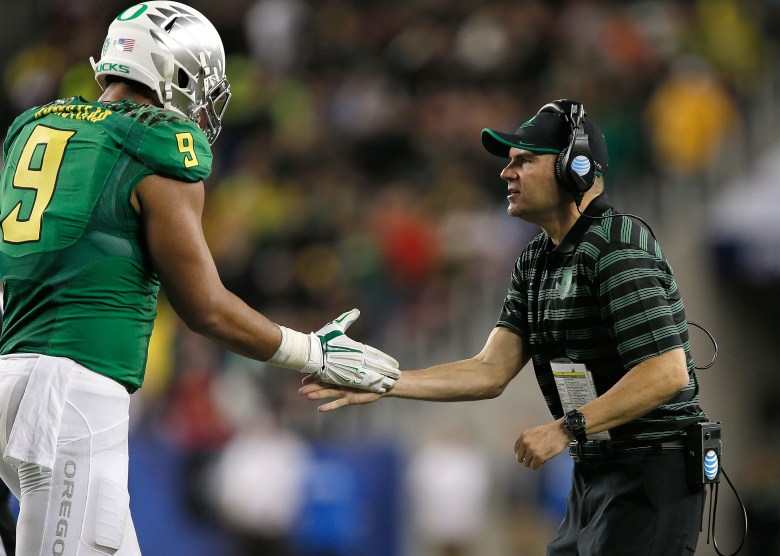 Helfrich grew up a big fan of the Ducks. He was born in Medford on October 28, 1973. He moved to Coos Bay when he was 3-years-old and later graduated from Marshfield High in 1992. He was a four-sport star in high school, and had original career aspirations of attending medical school and getting into the sports world that way.

Helfrich’s dad and uncle both played for Oregon — his dad played offensive line — and he spent many fall Saturdays watching the Ducks play at Autzen Stadium in Eugene, Or.

2. Before Joining the Program, Helfrich Had West Coast Coaching Experience 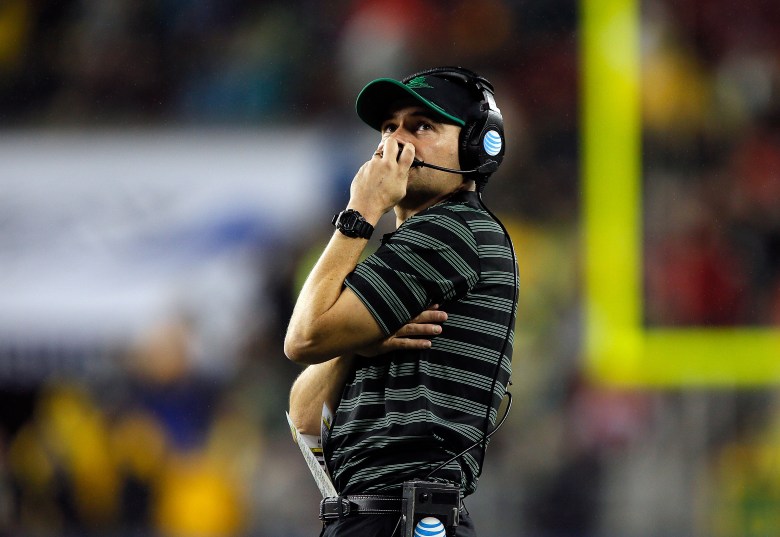 His 1st year as an assistant coach at Oregon was 2008 as the team’s offensive coordinator. He spent four years as the team’s offensive coordinator (2008-12) before being promoted to head coach after Chip Kelly left. During that time-frame, the Ducks played in the 2011 BCS National Championship Game against Heisman Trophy winner Cam Newton and the auburn Tigers, eventually falling 22-19. 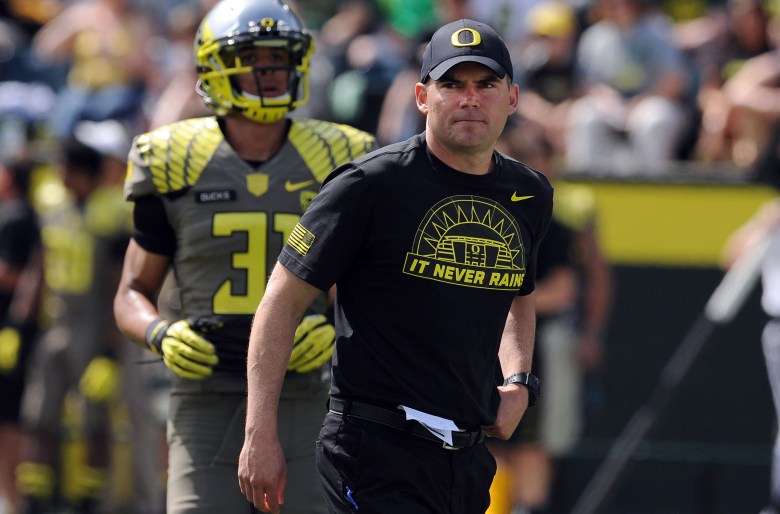 According to Helfrich’s bio on GoDucks.com:

Helfrich helped orchestrate the continuation of the program’s offensive firepower last season as the Ducks led the league in total offense (2nd in the country) for the fourth year in a row, in scoring offense (4th in the nation) for the seventh straight season, and in rushing (9th nationally) for the eighth time in many years.

This season, Oregon finished in the top 20 in both total passing and rushing offense with Heisman Trophy Winner quarterback Marcus Mariota leading the way with 3,783 passing yards and just two interceptions.

4.Mark is Married to Megan and Together They Have 2 Children 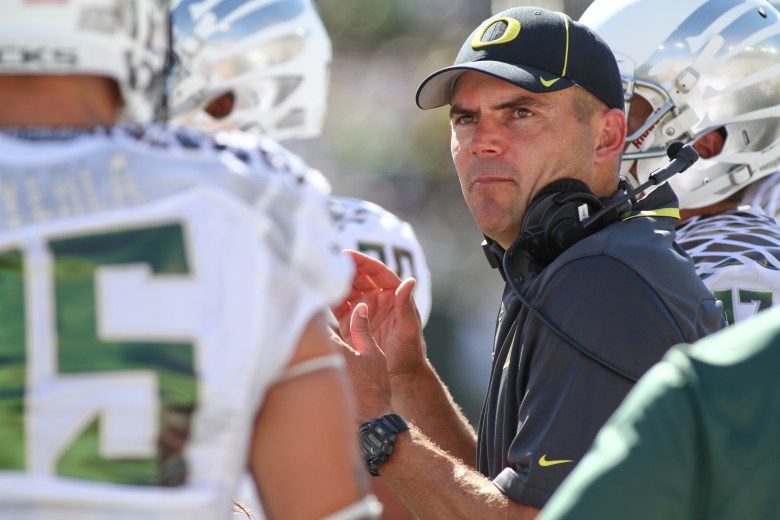 Together they are the parents of one son, 7-year-old Max, and a daughter, 3-year-old Maggie. Like Mark, Megan is a native Oregonian, originally from Berkeley, and they met when Mark was visiting his older brother John at the University of Oregon.

5. Helfrich Has Closely Matched Kelly’s Impact in his 1st 2 Seasons as Head Coach 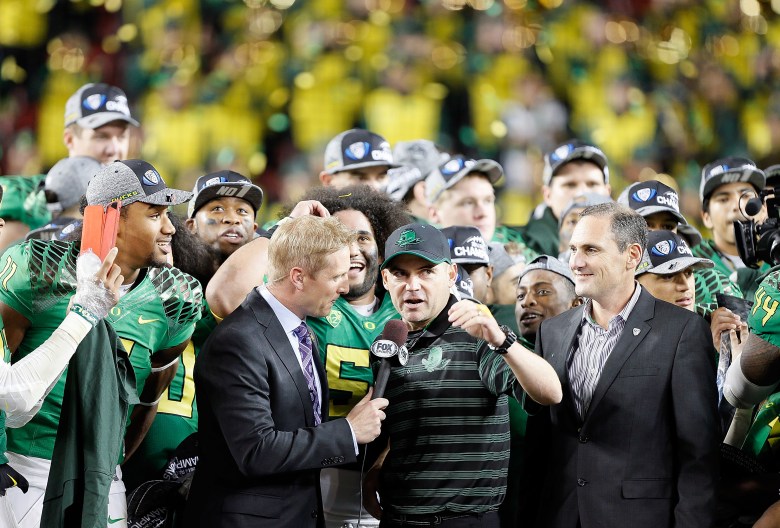 In Helfrich’s 1st two seasons, he actually has a better regular season record than Kelly at 23-3, but due to Stanford winning the Pac-12 North Division in 2013-14, Oregon didn’t have a chance to play in the Pac-12 Championship Game, and ultimately didn’t play in a BCS Bowl. Oregon defeated Texas 30-7 in last year’s Alamo Bowl. This year, Oregon won the Pac-12 North and demolished Arizona in the Pac-12 Championship Game to earn the right to be the No. 2 seed and play Florida State in College Football’s inaugural Playoff.