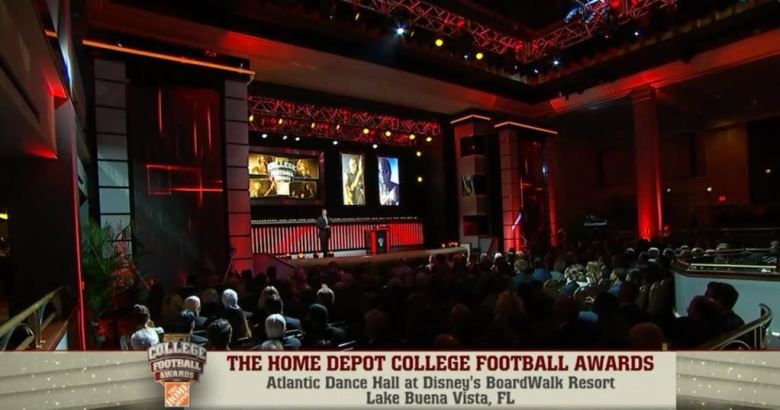 ESPN released the list of awards and nominees prior to the show.

Mariota finished 2014 with 3,783 passing yards, 38 touchdowns and just two interceptions. He is a 2014 Heisman Trophy finalist. Oregon finished as the No. 2 in the nation and will play Florida State in the College Football Playoffs.

Cooper set the SEC single-season receptions record this season hauling in 115 while adding 14 touchdowns. He is a 2014 Heisman Trophy Finalist.

Craddoc hit 24 consecutive field goals this season for the Terrapins, which set the program record.

Holliman, like 2014 1st round draft pick and former teammate Calvin Pryor, had a monster season for Louisville. He led FBS with 14 interceptions — more than 98 teams.

Scherff was also the Big Ten Offensive Lineman of the Year.

Gordon finished 2014 with 2,336 yards, 7.8 yards-per-carry and 26 TDs. Although Barry Sanders’ single-season record of 2,628 yards (with 39 touchdowns) is 294 yards away, Gordon has an outside shot of breaking it in Wisconsin’s Bowl game against Auburn — I mean, Gordon did run for 408 yards in a game against Nebraska this season. He is a 2014 Heisman Trophy Finalist.

Wright led all of FBS with 28 tackles for loss.

Mariota won the Davey Campbell Award and Maxwell Awards tonight. He has a chance to also win the Heisman Trophy on Saturday.

Walter Camp 2014 Player of the Year

Mariota was also the 48th recipient to Walter Camp Player of the Year Award. He became the first Oregon Duck player to ever win the award. The award is voted on by the nation’s 125 Football Bowl Subdivision head coaches and sports information directors.

Home Depot Coach of the Year:

The Home Depot Coach of the Year Award goes to Gary Patterson from @TCUFootball #CFBAwards pic.twitter.com/Vb31kfXNww

TCU went 11-1 in 2014 and won a share of the Big 12 Championship with Baylor, however, the Horned Frogs fell from No. 3 to No. 6 in the final College Football Playoff Rankings.

Tonight, in addition to the players that were honored, former Baylor football head coach Grant Teaff was honored for his contributions to college football.