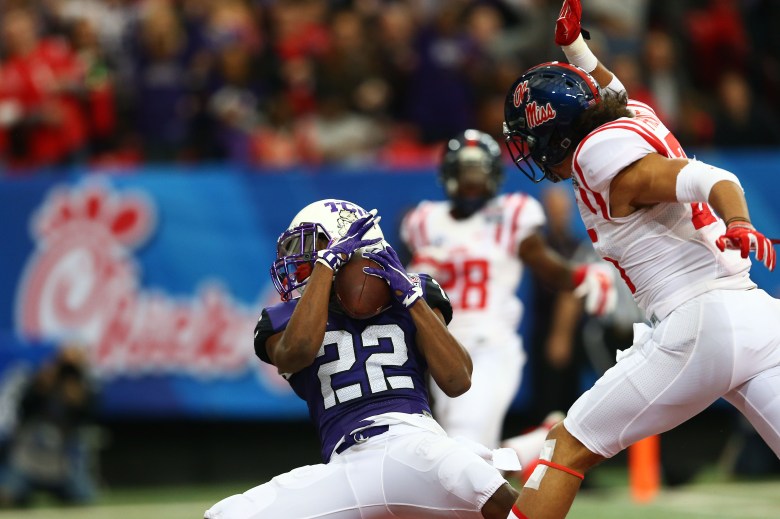 The No. 6 Horned Frogs, stinging from being left out of the inaugural College Football Playoff, steamrolled 9th-ranked Ole Miss (9-4) and its No. 1-ranked scoring defense 42-3 in Wednesday’s Peach Bowl.

TCU (12-1) carried a 28-0 lead into the half and lost the shutout bid midway through the 4th quarter when Gary Wunderlich kicked a 27-yard field goal with 7:18 left.

Set up with excellent field position after a 65-yard kickoff return by Ranthony Texada to open the 3rd quarter, Trevone Boykin found Kolby Listenbee 3 plays later for a 35-yard touchdown and a 35-0 lead.

Listenbee went up between 2 Rebels defenders on an ill-advised pass to come down with the catch, which was reviewed but upheld as a TD.

Ole Miss got the ball on the kickoff, but QB Bo Wallace fumbled it away 2 plays later.

Then Boykin immediately struck again, hitting Josh Doctson for a 27-yard score to put TCU up 42-0. It was Doctson’s 2nd TD of the game.

Touchdown, turnover, touchdown in 1:51 to start the 2nd half.

James McFarland intercepted a Wallace pass in the Ole Miss end zone for a touchdown and a 28-0 lead late in the 2nd quarter. It was Wallace’s 3rd interception of the game.

The TD came just 2 plays after Boykin threw his 2nd interception, a ball picked off by Cody Prewitt at the Rebels’ 2.

Boykin connected with Doctson on a 12-yard touchdown to give TCU a 21-0 lead early in the 2nd quarter.

Green Capped a 78-Yard Drive With His 2nd Touchdown

Green had 6 carries for 26 yards and added a 15-yard reception.

Listenbee threw a 31-yard touchdown pass to Green on a trick play to give TCU a 7-0 early in the 1st quarter.

The Horned Frogs’ Chris Hackett intercepted a Wallace pass on the Ole Miss 35-yard line on the Rebels’ 3rd play of their 1st possession. 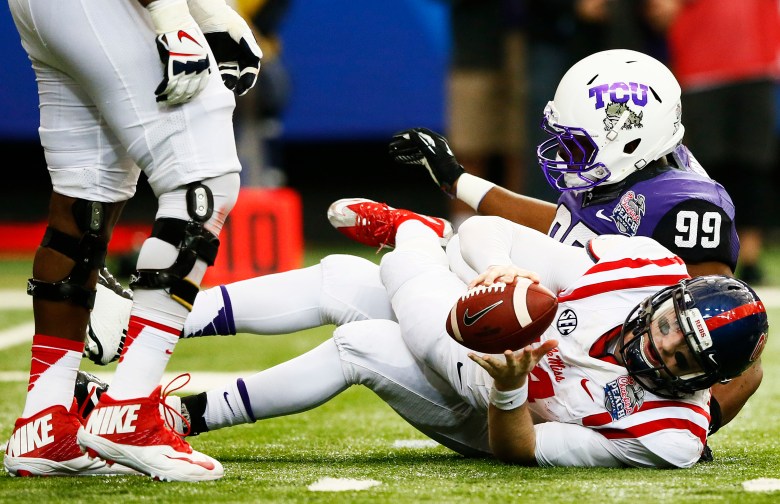 Despite throwing 3 touchdowns, Boykin also threw 3 interceptions. He hadn’t thrown more than 1 in a game all season. He finished 22-for-31 for 188 yards.

Wallace’s college career came to an ugly end. He was 10 of 23 for 109 yards and 3 interceptions. He also lost a fumble and was sacked 5 times in the 1st half.

Wallace threw 6 INTs and no TDs over the final 3 games. The senior, though, finishes ranked in the SEC’s career top 10 in a number of passing categories, including completion percentage and total yards.

In the first meeting of Top 10 teams this postseason, No. 6 TCU and No. 9 Ole Miss get the final day of 2014 kicked off in the Peach Bowl from the Georgia Dome in Atlanta.

The game is scheduled for Wednesday at 12:30 p.m. Eastern and can be seen on ESPN.

The Rebels (9-3) are led by quarterback Bo Wallace, who has thrown for 22 touchdowns, and the nation’s No. 1 scoring defense (13.8 points per game allowed). 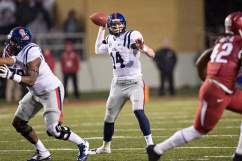 Read More
College Football, Football, Ole Miss, TCU
2014 is coming to an end and that means the bowl season gets kicked up a notch. TCU and Ole Miss go at it in the Peach Bowl. Keep it here for live updates, stats and highlights.