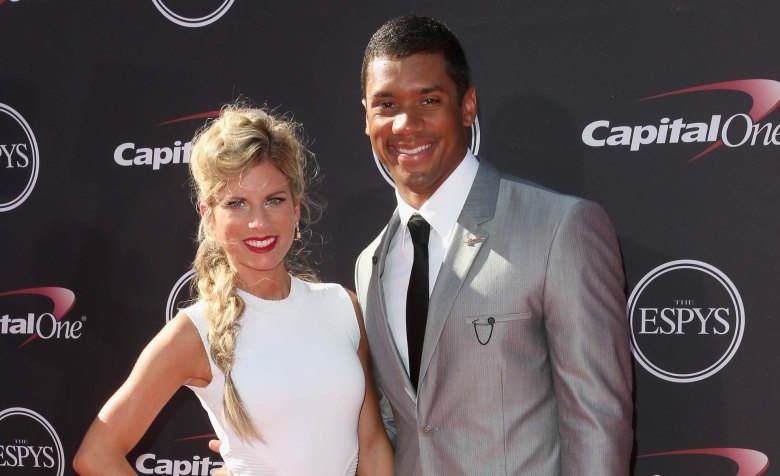 Ashton Meem and Russell Wilson in happier times at the 2013 ESPYs. (Getty)

Ashton Meem is the ex-wife of Seattle Seahawks quarterback Russell Wilson. The two were married in 2012, but they divorced just two years later, bringing to an end a romance that began when they were in high school and continued through the beginning of Russell’s playing career.

Here’s what you need to know about the former couple:

1. She Met Russell while in High School

While Wilson was starring in football, baseball and basketball at Collegiate School in Richmond, VA, Meem, who is a little more than a year older than Wilson, was about five miles away at St. Catherine’s High School. Their paths still managed to cross.

“We met briefly in high school,” she said. “Then again at a summer party and after that started seeing each other.”

When Ashton left for the University of Georgia, they kept up a long-term relationship.

At the University of Georgia for three years, Meem transferred to North Carolina State in 2009, a year after Wilson had tallied 21 touchdowns and an interception as a redshirt freshman. She graduated in 2010 with a B.A. in Communications.

According to Meem’s LinkedIn, she works as an Advertising Operations Assistant at American Family Insurance. 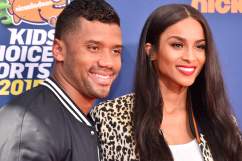 After capping his ridiculously productive career with a season at the University of Wisconsin, Wilson began preparing for the 2012 NFL Draft.

Before that, though, he got married. Engaged in August of 2010, the couple tied the knot on January 14, 2012 at the Country Club of Virginia.

A couple months later, the Seahawks selected Wilson on the second day of the draft, and Meem became an overnight sensation when she was shown on ESPN’s broadcast.

4. Meem & Wilson Divorced in 2014 Amid Rumors Meem Had an Affair With Golden Tate

In April 2014, two years after they were married, Wilson–in a stunning development–announced to his team that he would be filing for divorce.

“Clearly, decisions like these don’t come easy. Ashton and I respectfully ask for prayers, understanding and privacy during this difficult time,” he said. Moving forward, I will have no further comment on this personal matter.

Rumors swirled at the time that the marriage broke up because Meem was having an affair with then-Seahawks wide receiver Golden Tate, who signed with the Lions after the 2014 season.

Those rumors were completely unsubstantiated, though, and Tate addressed the situation in a column he wrote in The Cauldron:

Unfortunately, I have since been harassed on social media over a multitude of reasons about why I left, none of which are true. It was profoundly disappointing, not only that these “fans” were circulating rumors about me, but more so how my reputation became tarnished in the process.

I did not have an affair with Russell Wilson’s wife, nor did I have anything to do with his divorce. That is laughable for anyone who knows us. His ex-wife, Ashton, is still best friends with my girlfriend. Russell and I were good friends when I was in Seattle, on and off the field — he knows the rumors about me were unfounded, damaging to my reputation, and an attack on my character. Anyone who circulated that rumor was just plain irresponsible.

On February 18, Tate addressed the rumors again when his then-girlfriend and now-fiancee, Elise Pollard, and two other women were approached by a TMZ reporter.

Asked about the rumors, Tate said they were “a bunch of bullsh*t” and that he wished Wilson would have put an end to the rumors. He also reiterated that Pollard and Meem are best friends and that they wouldn’t be if there was any validity to the rumors.

Meem’s ex and Ciara entered the national spotlight when they appeared together at the White House in April.

They have since become one of the NFL’s most popular couples, while Meem has–probably gladly–fallen out of the spotlight. 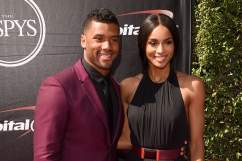 Who is Russell Wilson’s Girlfriend?