Former Green Bay Packers head coach Mike McCarthy is married to Jessica Kress and theirs is a blended family. Together, they have been actively involved in charity work, especially involving children. Multiple news sites are now reporting that McCarthy is the new head coach of the Dallas Cowboys.

Mike McCarthy was fired as the Packers’ coach on December 2, 2018. In a statement, the team’s CEO and president said, “We want to thank Mike, his wife, Jessica, and the rest of the McCarthy family for all that they have done for the Packers and the Green Bay and Wisconsin communities. We will immediately begin the process of selecting the next head coach of the Green Bay Packers.”

The McCarthys are now expected to make a new start in Dallas. She also now goes by the name Jessica McCarthy.

1. Jessica McCarthy Was Previously Married to a Member of the Packers’ Board of Directors

Kress, now Jessica McCarthy, the mother of four and stepmother of McCarthy’s oldest daughter, was first married to another member of the Packer organization, board of directors member William Kress, according to a Packer Report story. Together, they had two sons, Jack and George. The boys were 7 and 5, respectively, when Jessica and Mike married in 2008.

Court records show that Jessica Kress filed for divorce from William Kress in 2004. They were granted a divorce in 2005. William Kress has been the Chief Executive Officer and President of Green Bay Packaging, Inc.

Mike McCarthy has spoken about having a blended family. “Blended families, they’re a challenge. You don’t really know what you’re getting into, and ours has just come together, and I couldn’t be happier. You’d never know, unless someone told you,” he said, according to NFL.com.

2. The McCarthys Had a Small, Private Wedding

The McCarthys got married in Arizona in an intimate wedding attended by seven people. The guest list consisted of their parents, Mike’s daughter Alex from his first marriage, Jack and George, according to The Milwaukee Journal Sentinel.

Kress told the Milwaukee Journal Sentinel that she wanted to keep the wedding small and private to avoid being in the public eye. “They are a good match,” said Ellen McCarthy, Mike’s mother, to the newspaper. “She’s very warm. She truly cares for him and he needed somebody.”

3. The McCarthys Have 5 Children Between Them

It was Great filming with @Packers Coach Mike McCarthy and his wife Jessica. Life was made much easier with our new @teradek system! pic.twitter.com/eb6V9zvf8x

Mike and Jessica each have a previous marriage. They also both have children from those marriages, as well as two kids together.

In 2017, ESPN described the McCarthy brood this way: “McCarthy has three daughters of his own: Alex, from his first marriage, an aspiring actress who lives in Los Angeles; and 9-year-old Gabrielle and 6-year-old Isabella with his wife, Jessica. He and Jessica also have two high school-aged sons, Jack and George, from Jessica’s first marriage.”

Together, Jessica and Mike have two daughters, Gabrielle Kathleen and Isabella Conroy. When daughter Gabrielle was born in 2008, McCarthy said, according to People Magazine, “It’s been 17 years since I have been through this, but I don’t remember doing a whole lot! I’ll carry the bag and make sure there is gas in the car, things like that. I can handle that.”

4. Jessica Is an Elementary School Teacher Who Values Family

According to an AP story on Mike, Jessica is a teacher at an elementary school close to Lambeau Field. However, it took John Schneider, a member of the Packers’ player personnel, and his wife setting the two up for them to meet, according to the Journal Sentinel story. Prior to that, the couples’ close paths had never crossed.

Jessica McCarthy told ESPN, “Right away, when Mike and I met, that was one of our topics of conversation; I knew family was as important to him as it is to me. And that’s a trait you’d want in a person, or that I’d want in a person.”

5. The McCarthys Donate to a Wisconsin Children’s Hospital

According to the AP story, Jessica and Mike have raised and donated $1.5 million to the University of Wisconsin’s American Family Children’s Hospital through their charity, Sick Kids Can’t Wait. A large part of those funds have gone to the neonatal intensive care unit.

The hospital is located in Madison and regarded as one of the best, if not the best, children’s hospitals in the country. Jessica and Mike regularly visit the hospital to spend time with the patients.

UW Health describes the couple as “passionately committed to children.”

“Not only do they host an annual golf outing to benefit American Family Children’s Hospital, they have also chosen this hospital as their family’s legacy charity,” the article explains. 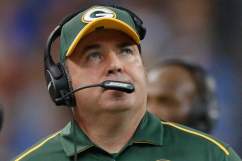