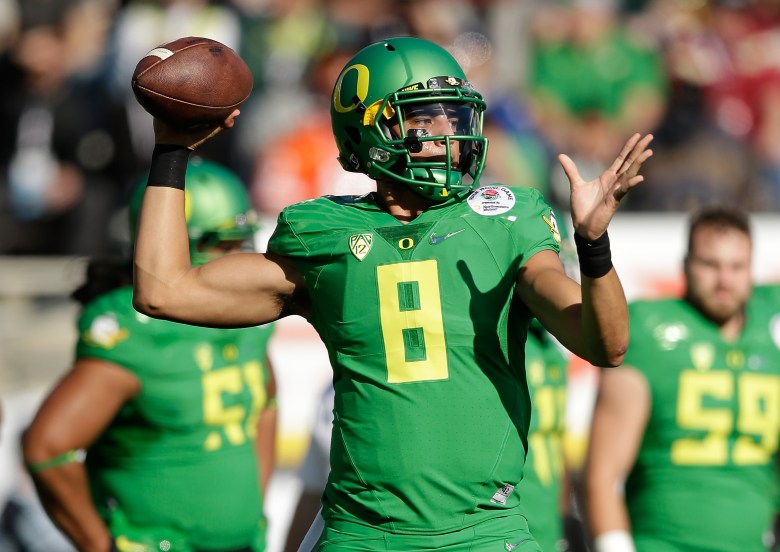 The 12-1 Pac-12 Champion, No. 2 ranked Oregon Ducks defeated the 13-0 ACC Champion, No. 3 ranked Florida state Seminoles 59-20 in College Football’s Inaugural Playoff Game held at the Rose Bowl in Pasadena, California. The Oregon Ducks will take on the winner of No. 1 Alabama and No. 4 Ohio State for the National Championship Monday January 12 in Arlington, Texas.

2014 Heisman Trophy winner Marcus Mariota finished the game 26-for-36 for 338 yards, two touchdowns and one interception. Mariota also rushed for 62 yards on eight rushes and a touchdown. He totaled 400 yards of offense in the game.

After a close 1st-half where Florida State only trailed 18-13 going into halftime, the Seminoles fell apart in the 3rd quarter, turning the football over three times — with the nail in the coffin coming on Jameis Winston’s fumble.

Winston finished the game 29-for-45 for 348 yards with a touchdown and an interception, but was frustrated by Oregon’s fast defense all night, and the fumbles from freshman running back Dalvin Cook didn’t help matters.

The Seminoles lost a game for the 1st time in over two seasons after coming into 2014 as the defending national champions.

Oregon Pulled Away Early in the 4th Quarter

Winston fumbled late in the 3rd quarter and the Ducks took it 58 yards the other way for a touchdown.

Florida State head coach Jimbo Fisher and Winston were seen arguing on the sideline after the play was over.

Just 1:04 into the 4th quarter, Mariota broke free for a 23-yard TD run — after the possession started after another Florida State turnover, their 3rd of the 3rd quarter — to put Oregon up 52-20. Oregon would later tally another touchdown off of the Seminoles’ 5th turnover to put the Ducks up 59-20.

It took 1:24 for the Oregon offense to answer — again. Five plays, 81 yards and Mariota countered Winston’s touchdown pass with a 56-yard strike to Darren Carrington, who broke free of the Florida State defense to give Oregon a 32-20 lead, their 3rd 12-point lead of the game.

On the next possession, Cook fumbled near midfield — his 2nd fumble of the game — giving Oregon the ball at the Florida State 43-yard line.

It took Oregon two plays to score, and for the 2nd consecutive possession, Mariota hooked up with Carrington for a TD pass — this time from 30 yards out. Carrington has 165 receiving yards in the game.

It took about 37 minutes, but a touchdown pass was finally thrown. Florida State answered Oregon’s touchdown drive with a 10-play, 75-yard drive of their own. Winston connected with Travis Rudolph for an 18-yard TD pass to bring the Seminoles with five again at 25-20 with 8:07 remaining in the 3rd quarter.

After Florida State freshman running back Dalvin Cook went over 100 rushing yards for the game, he lost a fumble, which the Ducks defense immediately recovered. Oregon made Florida state pay quickly moving 69 yards on just five plays capped off with Royce Freeman’s 2nd rushing TD of the game and gave Oregon a 25-13 lead.

Oregon effectively moved the football quickly throughout the 1st half and after the Seminoles went down by 12, Winston and the offense awoke — to the tune of a 6-play drive that covered 71 yards in just a 1:35 right before the half concluded. Running back Karlos Williams punched it in from 10 yards out to cut the Ducks lead to 18-13.

That was Marcus Mariota's 3rd INT in 397 attempts this season

After Mariota threw just his 3rd interception of the season near midfield, Florida State had an opportunity to score before the half concluded, but the Seminoles missed a 54-yard field goal attempt off the goal post.

Florida State won the coin toss and deferred, so they received the football to start the 2nd half.

Mariota extended plays with his legs all throughout the 1st-half. after a 10-play, 75-yard drive, running back Thomas tyner scored on Oregon’s 2nd 1-yard TD run of the game gave the ducks an 18-6 lead with 2:18 remaining in the half.

wow. big call. Winston stopped short of the goal line. Florida State now 0-5 this season on 4th down. Oregon takes over at its own 1.

The Oregon defense came up stout by holding Florida State out of the endzone on a 1st-and-goal situation. On 4th down, Winston tried to scramble into the endzone, and a play that was initially ruled a touchdown was reversed when replay showed Winston’s knee was down and the ball was at the Oregon half-yard line.

After the Ducks opened up the game with a three-and-out, Winston and the Seminoles marched down the field to open the scoring to make it 3-0. Oregon responded in just over two minutes, marching 73 yards on nine plays with the final play being a Royce Freeman 1-yard touchdown run. Mariota was 5-for-5 on the drive.

The play above was reviewed, but Oregon didn’t score because the football came just short of crossing the goal line — the Ducks scored two plays later.

Florida State hasn’t lost a game since the 2012-13 season, and Oregon enters with eight consecutive wins and redemption against the team that defeated them on October 2 (Arizona).

The Seminoles boast the 2013 Heisman Trophy Winner Jameis Winston — oh, and they’re the defending national champions. The Ducks boast the 2014 Heisman Trophy winner Marcus Mariota, and are currently the slight favorites in the game due to Florida State’s unimpressive romp through the regular season.