A gallery with some of our favorite photos of Dean Smith. LOOK: http://t.co/VF31l9aeoc pic.twitter.com/LfHlLVqQys

Legendary University of North Carolina coach Dean Smith passed away Saturday. He was 83.

Smith played a huge role in taking Michael Jordan from an unheard-of high school player to a third-overall draft pick.

In addition to Jordan, Smith also coached Hall of Famers James Worthy, Bob McAdoo, and Billy Cunningham, as well as Vince Carter and Sam Perkins, both of whom were multi-time All-Stars.

Here’s what you need to know about Smith and Jordan:

Dean Smith, who built UNC into a national college basketball power, has died at 83. http://t.co/bvletzGPZC pic.twitter.com/RPvyxNPBuc

In 1982, Jordan’s freshman season with the team, UNC made it all the way to the Championship game — and won. On Jordan’s go-ahead jumper.

In 2009, Smith replayed those moments in an interview with the Chicago Tribune.

Georgetown turned it over because Michael got back on defense and made a play in the passing lane. Freddy Brown threw the ball to James Worthy because Michael jumped in front of the guy he was trying to pass to.

He went on to say that Jordan’s worth ethic earned him a spot in the Hall of Fame.

One thing about Michael that stood out was how hard he worked. We expected he’d get better because of that, and he did, year after year. A player with that kind of talent who works as hard as Michael did has a chance to do great things, and he was smart about it. He’d listen closely to what the coaches said and then go do it. … He certainly belongs in the Hall of Fame. I don’t know that anybody ever combined the physical and the mental sides with the effort the way Michael did. Tiger Woods, maybe.

In it, Smith tells Jordan to contact him via “a collect call” with any questions he may have had prior to Smith’s follow-up call. He also mentioned that he would send a separate letter to Jordan’s parents for their hospitality. The full letter can be read above.

ESPN reported that in February, 2014, the letter, along with another and Jordan’s UNC diploma, were sold at auction for a combined $50,000.

3. Jordan Credited Smith in 2013 for Taking Care of Every UNC Player

In 2013, Smith was awarded the Presidential Medal of Freedom, the highest civilian honor, according to News Observer.

When asked about Smith, Jordan told reporters that he was equally invested in every member of the Tar Heel family.

Players with different backgrounds, different outlooks, different potential: He seemed to be able to reach all of them the same way. If you talk to a guy who never got off the bench, he says the same thing I say. That’s what a father figure is really like – he never put one kid above the other. The love that came from him: The caring, the advice, the education, and the persistence and determination he had in pushing all his players, not just me.

4. Smith Was Said to Have Been as Competitive as Jordan

Michael Jordan on Dean Smith: He was my mentor, my teacher, my second father http://t.co/492zTGVIV0 pic.twitter.com/L9ydm4HKI3

Dave Hanners, an assistant coach with the Pelicans, told the Washington Post Smith was as competitive as a coach as Jordan was a player.

Was Michael Jordan competitive on the court? That’s how competitive coach Smith was. People just didn’t see it in the same way.

5. Jordan Referred to Smith as His ‘Second Father’

We join the entire basketball community in mourning the passing of the legendary Dean Smith. pic.twitter.com/Wbg1bUslMh

In a statement released after Smith’s death, Jordan referred to him as “my mentor, my teacher, my second father.” The full statement can be read below.

Michael Jordan statement on the passing of Dean Smith. pic.twitter.com/zvNgIniu30 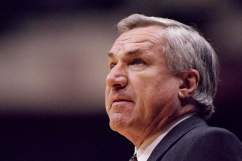 Dean Smith Dead: All the Tweets You Need to Read