He’s only gone and bloody done it. Six months after joining Liverpool from A.C. Milan, Mario Balotelli has finally scored a goal in the EPL for the reds.

It came late in the team’s game with Spurs as he converted a low Adam Lallana cross to place it home. Balotelli had come on as a substitute in the game, so did Lallana. The Italian striker gave Liverpool a 3-2 lead in the game, which they held on to for the win. Following the win, Balotelli posted this smiling pic to Instagram. Even if your heart is made of stone, it’s nice to see him smile.

Great game guys!!! This smile is ONLY for those that always Belive and support me. Thank you . ❤️ and Forza Liverpool?. But now head down and keep working hard. Tonight is past.

According to Twitter stat God, Opta Joe, it was Balotelli’s 48th shot of the season.

Balotelli was completely mobbed by his team mates after the goal went in. (Getty)

The atmosphere in the game had gone quiet at Anfield as Tottenham twice got themselves back into the game to make it 2-2. Liverpool fans though exploded when Balotelli lashed his chance home.

His celebration was muted, Balotelli allowed the crowd and his team mates enjoy the moment. It won’t be remembered now in the aftermath of Balotelli’s goal, Liverpool’s recently returned striker Daniel Sturridge nearly scored one of the cheekiest goals of all time during the game:

As news of the goal filtered through, the shocked reactions of soccer fans across the world came flooding in: 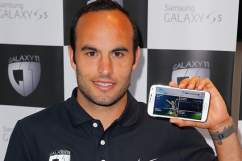