Frank Mir comes off 4 straight losses and travels into Porto Alegre, Brazil to take on Antonio “Bigfoot” Silva. Both fighters are in desperate need of a win to stay relevant in the ever growing heavyweight division. Surprisingly, this is only the second time Mir has traveled outside of North America in his extensive 14-year UFC career. For Bigfoot, this is his third straight fight outside of the USA and his second consecutive fight in his home country Brazil.

Both fighters very cautious out of the gate. Surprisingly, Mir is standing with Bigfoot, rather than trying to take him to the ground to attempt a submission. Mir lands a huge left hand out of nowhere and it rocks Bigfoot. Bigfoot falls back and Mir finishes him off with some great ground and pound. An absolutely huge win for Mir but equally as devastating for the former Strikeforce champ Bigfoot. The crowd in Porto Alegre Brazil is absolutely dead silent as Mir’s win is officially announced.

Both guys come out swinging for a KO immediately. Jon Anik states “these guys are trying to take each others’ heads off”. After the initial storm calms down, there are some back and forth exchanges with Johnson getting the better of them. Barboza lands some decent kicks. Blood starts to come from both of Barboza’s eyes towards the end of round 1.

Barboza comes out in round 2 a little more cautious and lands some good kicks. Johnson is still controlling the octagon but not doing nearly as much damage. Barboza lands a great kick that staggers Johnson momentarily. Barboza continues to land some great punches throughout the round that keep Johnson from getting in too close. Barboza could win that round but its close.

Johnson stays on the offensive and Barboza attempts some wild kicks, clearly going for a KO. Johnson keeps control and lands some great combinations on Barboza. Barboza continues to attempt wild spinning kicks, but none of them land. Johnson stalks down Barboza the entire round and Barboza lands some body kicks. Johnson lands a takedown with about 20 seconds left to what seems to seal up the fight.

The Ultimate Fighter Brazil winner Cezar Ferrerira comes out swinging for a knockout. Spinning heelkicks and hard overhand punches don’t land too solidly on Alvey, but Czar clearly doing some damage. Alvey comes out of nowhere and lands a vicious combination, knocking Ferreira out.

Khabilov looked impressive against Benson Henderson in his last fight, and it shows early in this fight against Martins. Khabilov lands some great punches early in the first round. Second round Khabilov with more overhand punches and getting the better of the exchanges but Martins lands a takedown and gets in some wrestling. Third round Martins seems to find a second wind and actually winds up on top of Khabliov. Khabilov gets back to his feet and the Martins takes him down again. Very close fight to judge.

Alcântara couldn’t do enough late in the fight to persuade the judge’s decision. Saenz started off the fight in control and worked the ground and pound throughout. A huge win for Saenz that could see him now ranked in the Bantamweight division.

Nice. Judges got it right. No drama, soon as they said 30-27 you knew Frankie got it. Big time win.

This fight was an absolute brawl. Ponzinibbio in the end did more striking damage than Strickland and locked up a UD. Strickland did his fair share of damage as well and showed tremendous heart. There were many points throughout the fight that Strickland looked fazed but he stayed with it. Early favorite for Fight of the Night. 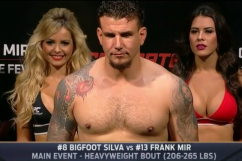