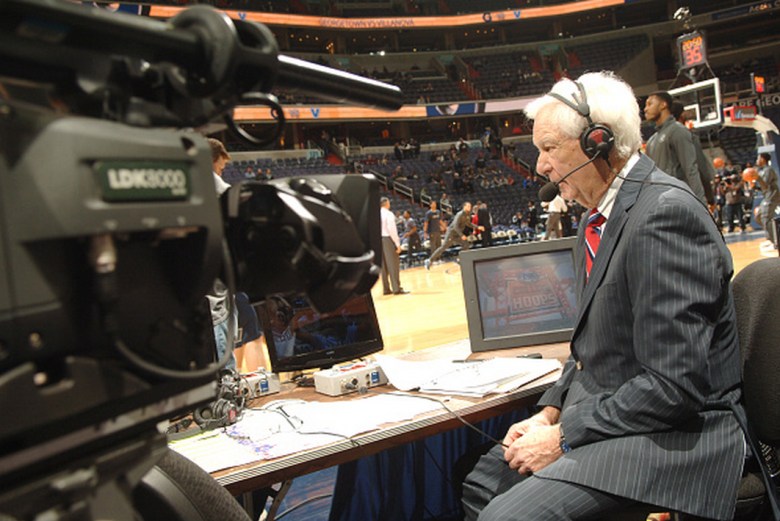 Fox announcer Bill Raftery talks on the air before a college basketball game against the Villanova Wildcats at the Verizon Center on January 19, 2015 in Washington, DC. The Hoyas won 78-58. (Getty)

It’s a word to get used to as it’s a trademark quote of a broadcaster who will be filling the airwaves throughout March Madness 2015. For the first time in his career, Bill Raftery will be joining the No. 1 crew to broadcast for the Final Four.

Here’s what you need to know about Bill Raftery:

1. This Is Raftery’s First Time Broadcasting the Final Four 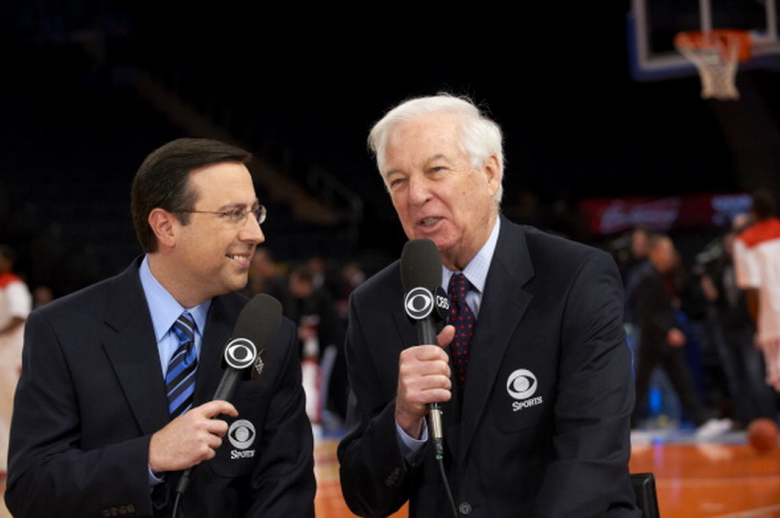 Raftery, 71, has been a part of the CBS Sports college basketball coverage since 1983, but, believe it or not, this will his first time getting the nod to broadcast for the Final Four.

After playing and coaching at the collegiate level, Raftery took his knowledge and channeled it into the role of an analyst and play-by-play announcer. In the past Raftery has frequently been partnered with Verne Lundquist for March Madness coverage.

He also served as an analyst for CBS Radio/Westwood One’s coverage of the NCAA Men’s Final Four along with Kevin Kugler and John Thompson. Raftery has even expanded to NBA coverage – serving as an analyst for the New Jersey Nets – and to the PGA – working as an on-course commentator for PGA Tour Champions Tour events. And in June 2013, Raftery continued his Big East hoops coverage alongside Gus Johnson for the Fox Sports 1 network.

2. Raftery Was a Head College Coach for 16 Years 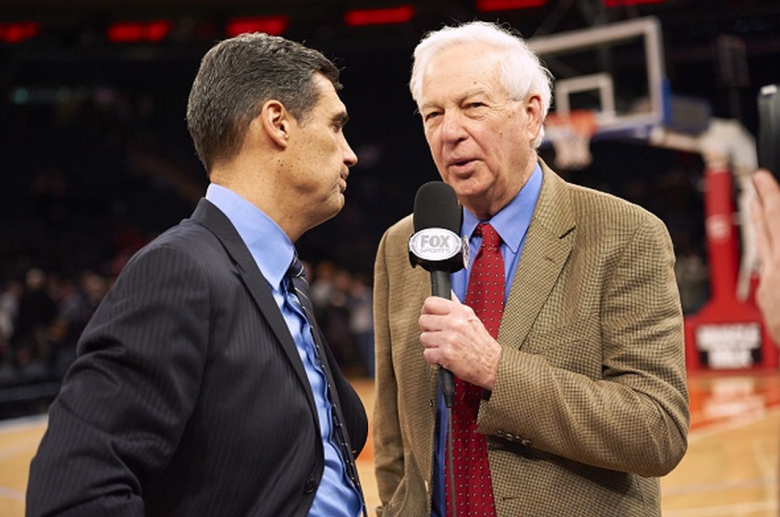 While at St. Cecilia High School in Kearny, New Jersey, Raftery was a three sport athlete. In basketball he became the all-time leading scorer in state history with 2,192 points – a record that took 35 years to break. Raftery also earned all-state honors in basketball, led his team to the state championship in his senior season and was named 1959 Mr. Basketball USA. He was also named all-state in baseball and soccer.

Following high school, Raftery took his playing career to La Salle University where he set the freshman scoring record by totaling 370 points, had a team 17.8 points per game his sophomore year and helped lead the Explorers to the NIT as a senior co-captain.

Raftery was drafted in the NBA by the New York Knicks. He made it to the final cut, but he never played in the NBA. Instead he started coaching in 1965 at Fairleigh Dickinson University in Florham Park. Raftery coached both basketball and golf and worked as the associate athletic director until 1970 when he then took the head coaching position at Seton Hall University. During his 11-year career at the helm of the Pirates, Raftery posted an overall 154-141 record, coached Seton Hall to four ECAC post-season tournaments and two NIT berths. In 1979, Raftery was named Coach of the Year by the New Jersey Sports Writers Association and his 154 wins as a coach places him fourth on the all-time list at Seton Hall behind Honey Russell, P.J. Carlesimo, and Frank Hill.

3. Raftery Is Known for His Unique Trademark Phrases

Raftery is well-known for his unique trademark phrases during his play-by-play broadcasts. His most recognized quotes are: “Onions!” – which is when a shot is made late in a close game. “Send it in big fella!” is when a post player makes a slam dunk. And “With a kiss” refers to when a player makes a shot off the backboard.

He is also especially remembered for “Send it in, Jerome!” It came immediately after Pitt’s Sean Miller – now the current Arizona head coach – passed the ball to Jerome Lane who then shattered the backboard with a dunk during a 1988 game.

4. Raftery Is the President of an Event and Marketing Firm 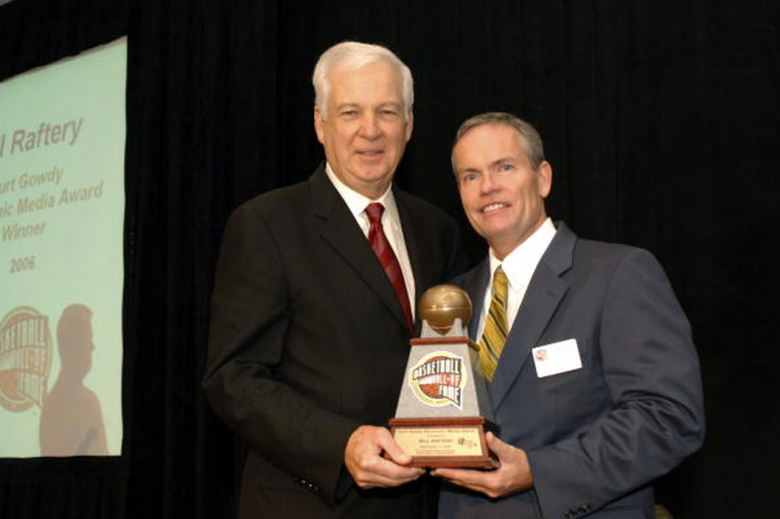 When he’s not a part of the college hoops broadcast, Raftery puts his bachelor’s, master’s and honorary doctorate degrees to work as the president of W.J. Raftery Associates.

Started in 1981 in South Orange, New Jersey, W.J. Raftery Associates is an event and marketing firm. According to Manta.com, the company employs five and is estimated at an annual revenue of 410,000.

5. Raftery and His Wife Live in New Jersey 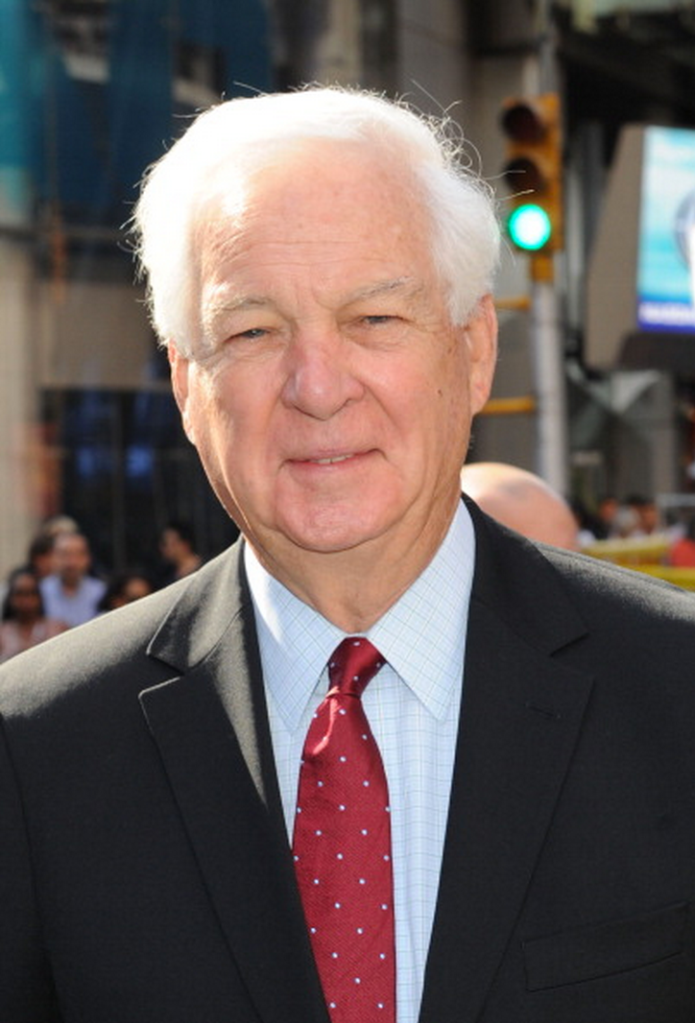 Raftery’s parents came from Ireland and since then he has stayed settled on the East Coast. He and his wife Joan live in Florham Park, New Jersey – yes, the same place where Raftery got his start in coaching at Fairleigh Dickinson University.

Raftery and Joan have four children and four grandchildren.