Mississippi State quarterback Dak Prescott and teammates Damian Williams and Torrey Dale were jumped at a concert while on Spring Break in Panama City, Florida. (Twitter)

Mississippi State quarterback Dak Prescott and teammates Torrey Dale, a defensive lineman, and Damian Williams, a backup QB, were attacked at a concert while on Spring Break in Panama City, Florida.

The trio of Bulldogs were at a Waka Flocka show when they were jumped by a group of men. MSU assistant AD for media relations Bill Martin said the assault was unprovoked.

From the videos and photos plastered all over internet, it appears Prescott and his teammates took some punishment, but none of the injuries were serious.

Prescott tweeted he is OK:

Thanks for all the Concerns and Prayers! I'm okay and ready to get back to Starkville. Ignorance happens! Be safe on Spring Break!

A group of men, one using the Twitter account @str8fam_dwilson, bragged in a couple of tweets about beating up Prescott:

@str8fam_dwilson <<<< he got real scared and locked his account pretty quick after people found out what he tweeted pic.twitter.com/eUpUHaW9nS

No arrests have been made and the players have said they will not press charges.

Videos and photos flooded Twitter from witnesses filming the attack.

Here are a handful which were posted from the onlookers. Be advised, some of the videos contain strong language.

Here's that video of Dak Prescott getting jumped at a Waka Flocka show (warning: language) https://t.co/R2dUJe10BY

A crowd beats up Dak Prescott, and then they run away. The definition of being a coward. Smh…pic.twitter.com/OZeLSLe6ob 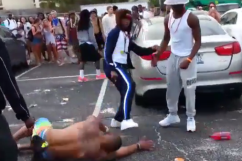