It had to happen. Danny Welbeck scored in the FA Cup for Arsenal against Manchester United, his old team. In a game of farcical defending, a goal like this could always be expected. It was United’s Antonio Valencia who played a ridiculous back pass to David De Gea. It was well cut out by Wellbeck who went through and finished into an empty net. The goal turned out to be the winner as the game finished 2-1 which means that Louis Van Gaal’s first season as United manager will likely end trophy less.

Shockingly, Welbeck bucked the trend of players not celebrating goals against their old teams. He celebrated. Quite a shock. About ten minutes after scoring the goal, Welbeck was substituted to loud boos from his former fans at United’s Old Trafford stadium.

And here it is from another angle:

The 2-1 scoreline was made more resounding about ten minutes after the goal when Man Utd’s Angel Di Maria was sent off for tugging at the referee’s shirt. You can watch that incident here. 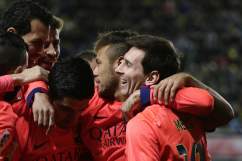 WATCH: Lionel Messi Sets up Neymar With a Perfect Pass