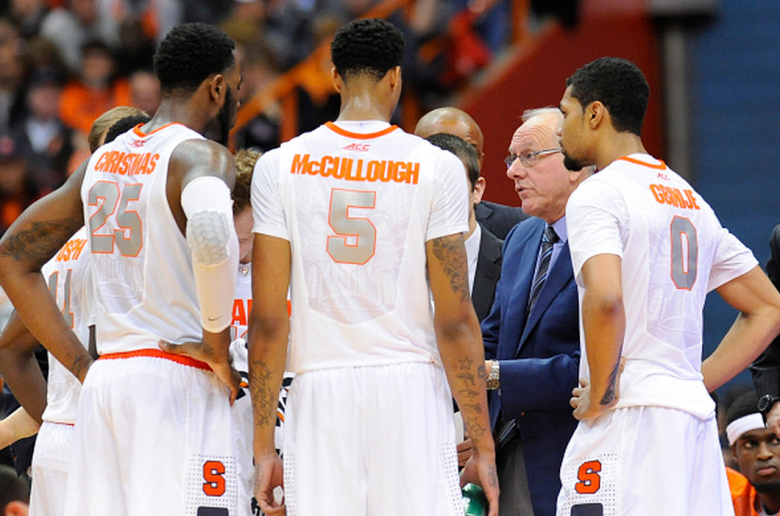 Head coach Jim Boeheim of the Syracuse Orange speaks with his team during a time out against the St. John’s Red Storm in the second half of the game at the Carrier Dome on December 6, 2014 in Syracuse, New York. St. John’s defeated Syracuse 69-57. (Getty)

Syracuse – a well-known powerhouse team in college hoops – was absent from the Atlantic Coast Conference tournament and the big dance this year because of a self-imposed postseason ban made on February 4 by the university for an ongoing NCAA investigation regarding “past mistakes,” according to The Post-Standard at Syracuse.com.

Well, the ongoing part has come to an end. Friday, March 6, the NCAA released their decision, which included a nine game suspension for head coach Jim Boeheim and a loss of 12 total scholarships – three per year for the next four years – because of multiple infractions that span back to 2001.

While he preps the ‘Cuse program for his retirement, here’s what you need to know about Jim Boeheim:

1. Boeheim Said He Would Take a Suspension so His Players Could Play in The Tournament 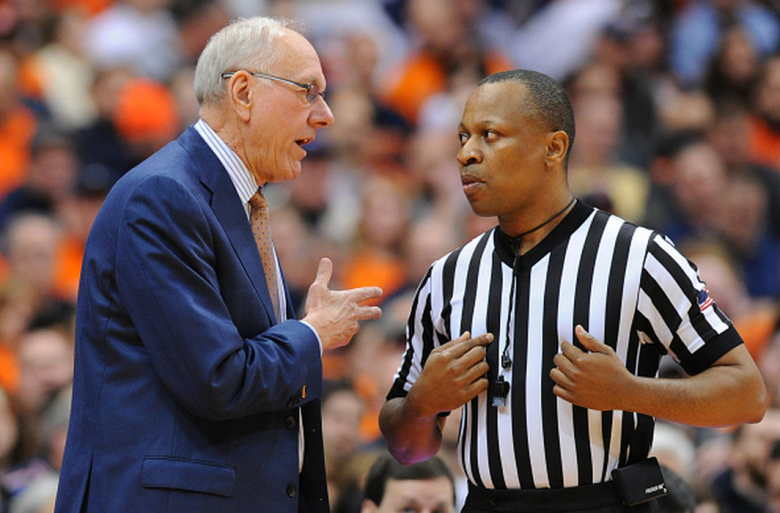 Head coach Jim Boeheim of the Syracuse Orange talks with referee Michael Stephens during the second half of the game against the Louisville Cardinals at the Carrier Dome on February 18, 2015 in Syracuse, New York. Syracuse defeated Louisville 69-59. (Getty)

On Wednesday, February 25, the long-time ‘Cuse coach told Dan Dakich, Indianapolis’ 1070 The Fan host, that he would take a suspension instead of punishing the players, who had nothing to do with the past violations.

Dakich asked, Boeheim, 70, if that suspension was an option. Boeheim responded:

If I had nothing to do with any violation and that was the proposal, I would take it. I would take that punishment. I am responsible, I am in charge of the program. The NCAA can hold coaches responsible, as you know, with the new legislation.

Boeheim described the hardships of waiting for a decision to be made about the eight-year investigation by the NCAA Committee on Infractions.

Obviously it’s painful that we can’t got to the tournament.

We had no choice. We’re waiting to hear the final results from the NCAA, which should be…at sometime soon. The one problem, and I obviously can’t talk about the investigation until it’s over, the one problem we all have is that most violations occur in the past. So the present team is affected.

While at the time a full list of violations and details weren’t made public, Syracuse.com reported that some of the violations include: issues with student-athlete academic services, issues with academic internships, violations of the school’s internal drug policy and impermissible benefits.

And now, according to the NCAA, “Syracuse did not control athletics; basketball coach failed to monitor.” As a result, Boeheim did get the suspension, but, unlike his comments to Dakich, his players still won’t be making a run in the postseason this year. But on the plus side, the NCAA didn’t impose any further postseason bans to occur in future seasons.

Although Boeheim and the Orange won’t have the opportunity to avenge last season’s tournament upset against 11th-seeded Dayton, they posted an 18-12 record and a No. 6 ACC regular season ranking. And now they sit…waiting and watching.

2. Boeheim Was The Second Winningest Coach in NCAA Division I Men’s Basketball History

Boeheim has bled Orange since 1962 when he walked on as a guard for the basketball team. As a senior he was named co-captain alongside Dave Bing, who is a retired NBA Hall of Fame player, and helped lead his team to a 22-6 record and the program’s second-ever NCAA Tournament berth.

In 1969 Boeheim began his coaching career at SU as a graduate assistant under head coach Roy Danforth. He continued as an assistant until taking over the helm in 1976.

In his 38th season as head coach, Boeheim has amassed over 966 wins to make him the second winningest coach in NCAA Division I men’s basketball history behind Duke’s Mike Krzyzewski, who became the first to reach 1,000 career wins on January 25.

But that’s not the case anymore.

Now that the NCAA is requiring SU to forfeit 108 of those wins, Boeheim drops to 858 wins and to No. 6 on the all-time wins list behind Bob Knight, Dean Smith, Jim Calhoun and Adolph Rupp.

The vacated victories not only affects his pursuit of 1,000 – a feat SU thought he might reach in the next two years – but will also impact his NCAA record for the most 20-win seasons, he had 35, but once the specific victories are determined, that number will change.

But even with the vacated wins, Boeheim holds the record for total wins at one program – Krzyzewski’s wins came from Army and Duke – and he is still one of only four coaches – joining Dean Smith, Mike Krzyzewski and Rick Pitino – to take his school to the Final Four in four decades.

And he still has other accolades. On February 24, 2002, SU named the Carrier Dome court “Jim Boeheim Court.” Boeheim coached ‘Cuse to a national championship in 2003 when Carmello Anthony – now with the New York Knicks – was one of his players. Boeheim was inducted into the Basketball Hall of Fame in 2005, received the John R. Wooden “Legends of Coaching” Award in 2006 and was named a Naismith Coach of the Year in 2010.

Despite his success and recognition with the Orange, believe it or not, Boeheim is not within the top 20 highest paid college basketball coaches. His $1,818,661 per year salary puts him at No. 23, according to USA Today.

3. Boeheim Was an Assistant Coach For The USA Men’s Olympic Team 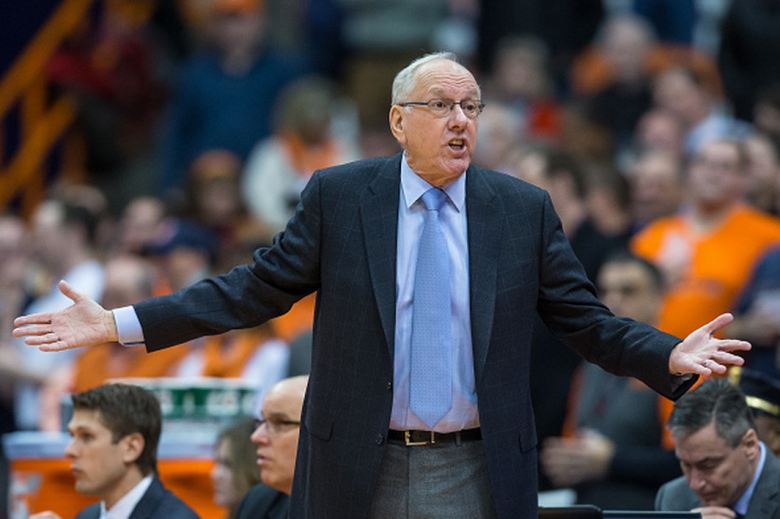 His US national team career started in 1990 as an assistant under Krzyzewski for the FIBA World Championship where they won the bronze medal. Then in 2001, Boeheim not only helped lead the Young Men’s Team to a gold medal at the World Championship in Japan, but was also named USA Basketball 2001 National Coach of the Year.

In 2006, he returned as an assistant to Krzyzewski for the FIBA World Championship. And again, they came home with the bronze medal. And the Krzyzewski-Boeheim duo continued for the 2008 Beijing Olympics and 2012 London Olympics – this time winning gold both times. 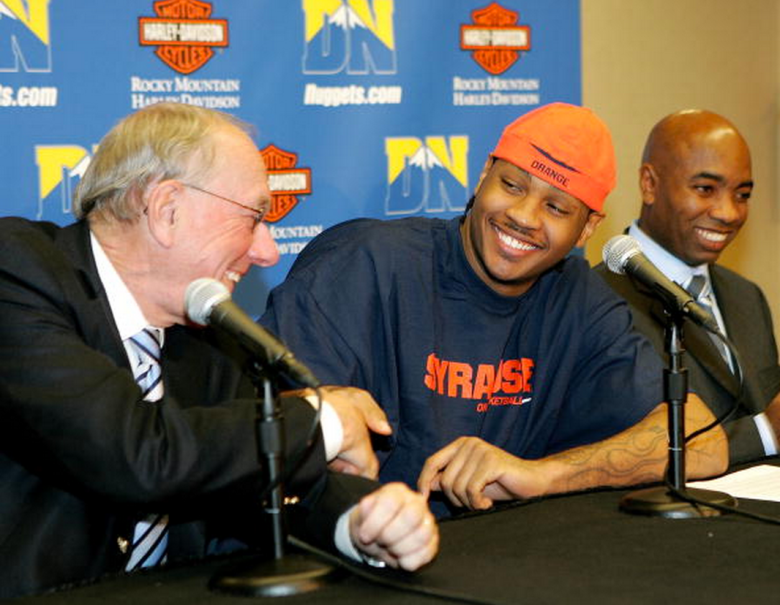 Syracuse Head coach Jim Boeheim (L) and Athletic Director, Daryl Gross (R) sit with Carmelo Anthony of the Denver Nuggets as he announces a 3 Million Dollar donation to the University of Syracuse for a new Basketball facility on November 7, 2006 at the Pepsi Center in Denver, Colorado. (Getty)

Mid-way through the 2001 season, Boeheim faced his biggest challenge in his career. It wasn’t facing Duke, Kentucky or Kansas, no, this one was off the court. At the age of 56, Boeheim was diagnosed with prostate cancer, an illness which claimed the life of his father.

Despite being in season, he wasted no time getting treatment. Boeheim flew to St. Louis to meet with Dr. Catalona, who recommended surgery to remove the prostate. Again, Boeheim acted quickly to get the surgery and continued on to a speedy recovery – within 10 days of the surgery he was back to coaching the Orange. He told Men’s Fitness:

Like with anything you go through, the best thing is to keep moving and get right back into the game. I’m competitive, so I’d rather be coaching my team instead of watching them play on television. And since I caught the disease early, I didn’t need chemo so my recovery was quick. I felt as good as I ever did within three months.

And just 16 months after treatment he coached the Orange to the 2003 national championship title. 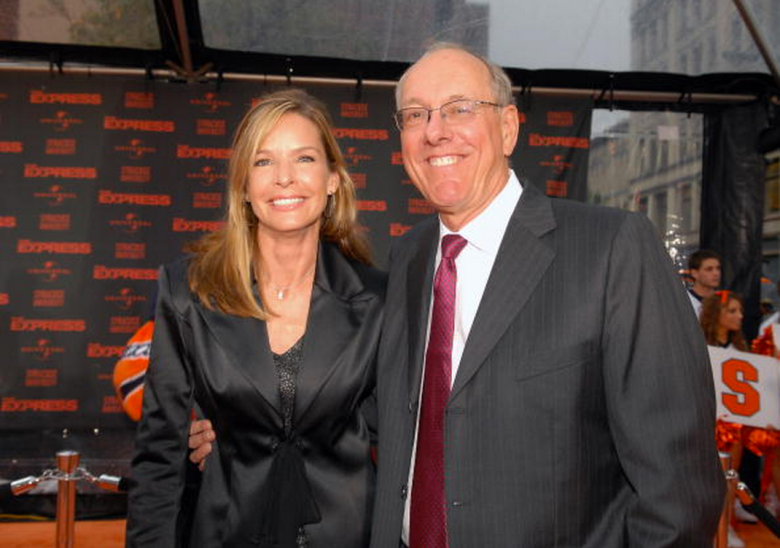 Syracuse University head men’s basketball coach Jim Boeheim and his wife Juli attend the world premiere of ‘The Express’ at the Landmark Theater on September 12, 2008 in Syracuse, New York. (Getty)

According to the Cardinal Chronicle, Louisville Head Coach Rick Pitino wrote in his blog that he “allegedly” introduced Boeheim to his wife Juli at a Kentucky Derby party in 1994.

When Jim met Juli, his life took on a whole new look. Old movies were out and his dress got a total makeover. Gone were the Wimp Sanderson plaid jackets. Now he wears Armani. Before Juli, Jim thought Armani was a wing player from Buffalo.

Whether the story is true or not, Boeheim and Juli got married in 1997 and have since had three children together – James and twins Jack and Jamie. Boeheim also has a daughter, Elizabeth, with his former wife, Elaine.

Boeheim and Juli are also involved with the community and charity foundations together. They participate in Coaches vs. Cancer, they created an event called the Basket Ball, which is a black tie fundraiser with all proceeds going to cancer foundations, and in 2009 they developed the Jim and Juli Boeheim Foundation, which is focused on helping welfare children in Central New York and also raising funds for cancer treatment and prevention research.

And while you won’t be seeing shots of Boeheim, Juli and the kids during the tournament, if you’re going through ‘Cuse withdrawal you can always cozy up with Boeheim’s autobiography, Bleeding Orange: Fifty Years of Blind Referees, Screaming Fans, Beasts of the East, and Syracuse Basketball.