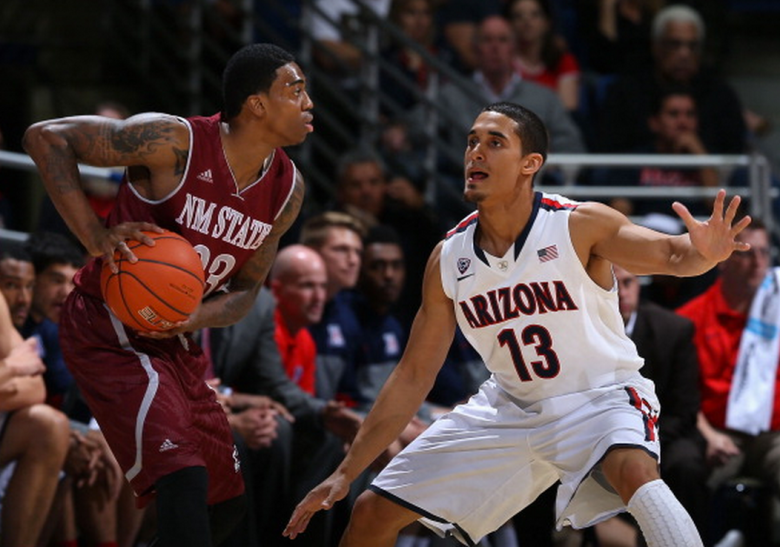 Daniel Mullings #23 of the New Mexico State Aggies looks to pass against Nick Johnson #13 of the Arizona Wildcats during the college basketball game at McKale Center on December 11, 2013 in Tucson, Arizona. he Wildcats defeated the Aggies 74-48. (Getty)

As the team atop the Western Athletic Conference during the regular season, New Mexico State University was pegged as earning an automatic bid by winning the WAC Tournament.

You can meet the Aggies here and review their entire journey to the NCAA Tournament in their season schedule.

Here’s what you need to know about New Mexico State:

Dating all the way back to 1952, New Mexico State has gone dancing 21 times. And this year will mark their fourth straight dance appearance.

The Aggies most successful tournament run was in 1970 when they advanced to the Final Four. The last three seasons, NMSU had one-and-done runs. They fell in their first round of play to Indiana in 2012, Saint Louis in 2013 and San Diego State in overtime in 2014. 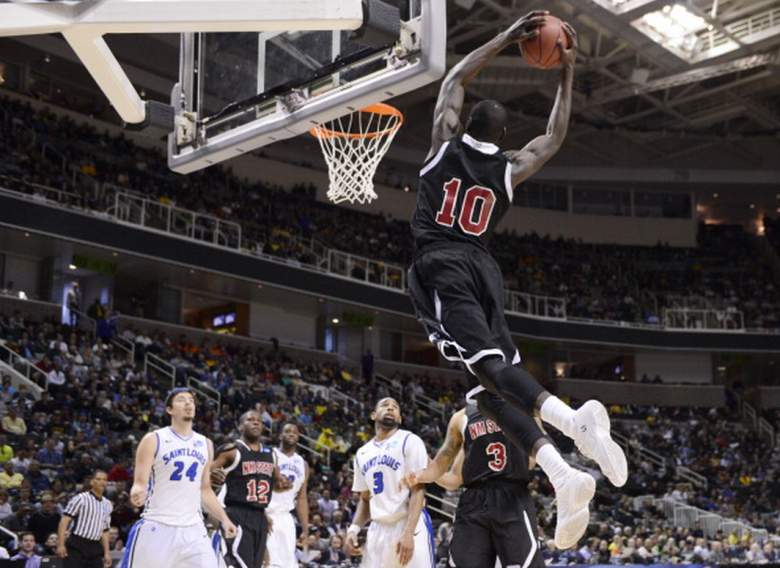 Bandja Sy #10 of the New Mexico State Aggies goes up against the Saint Louis Billikens in the second half during the second round of the 2013 NCAA Men’s Basketball Tournament at HP Pavilion on March 21, 2013 in San Jose, California. (Getty)

The Aggies are just one of the 34 collegiate teams in the nation to have multiple NBA retired jerseys from former players – Sam Lacey and John Williamson, who both helped lead the team to the 1970 Final Four.

3. The Aggies Have Four Double-Digit Scorers 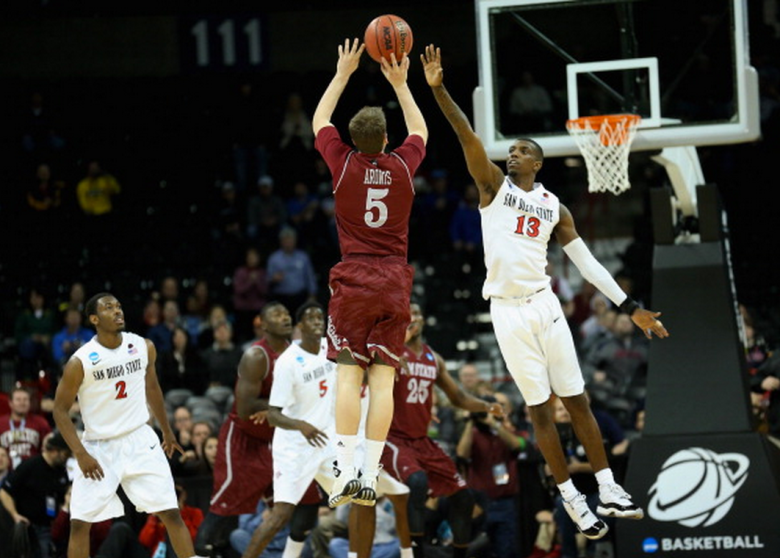 Kevin Aronis #5 of the New Mexico State Aggies makes a three pointer over Winston Shepard #13 of the San Diego State Aztecs to tie the game and send it into overtime during the second round of the 2014 NCAA Men’s Basketball Tournament at Spokane Veterans Memorial Arena on March 20, 2014 in Spokane, Washington. San Diego State won the game 73-69. (Getty)

Pascal Siakam is a 6-foot-9 redshirt freshman from Cameroon. He leads NMSU in rebounds – 7.8 and is second in points – 13.1. Siakam also shoots 57.7 percent from the floor and 76.0 from the charity stripe.

Siakam is joined by three other teammates who also score in the double digits each game – Remi Barry leads the team with 13.1, Daniel Mullings – 12.6, and Tshilidzi Nephawe – 10.4.

4. Marvin Menzies Is In His 8th Season as Head Coach 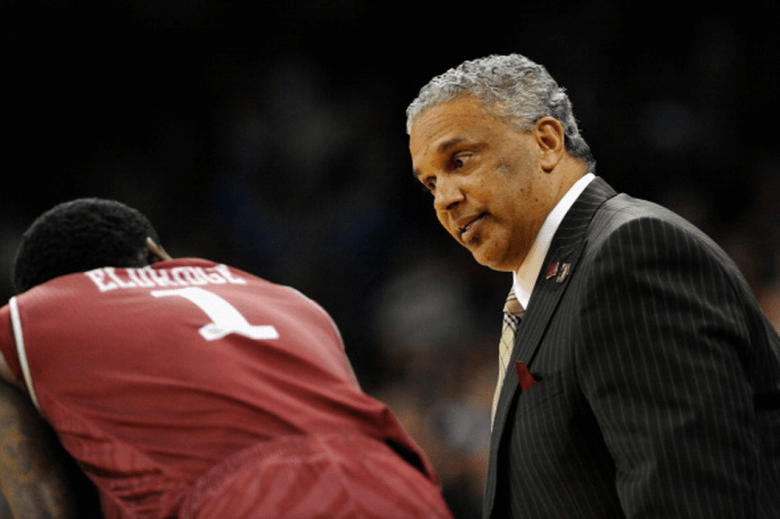 Head coach Marvin Menzies of the New Mexico State Aggies talks to DK Eldridge #1 during the game against the San Diego State Aztecs in the second round of the 2014 NCAA Men’s Basketball Tournament at Spokane Veterans Memorial Arena on March 20, 2014 in Spokane, Washington. (Getty)

Marvin Menzies, 53, was born and raised in Los Angeles, California. He started his coaching career in 1983 as the assistant of Hamilton High School in L.A. During his time at Hamilton, Menzies received his B.A. in 1987.

After learning under Cardinals’ coach Rick Pitino, Menzies left in 2007 to take over the New Mexico State program and has been there ever since. 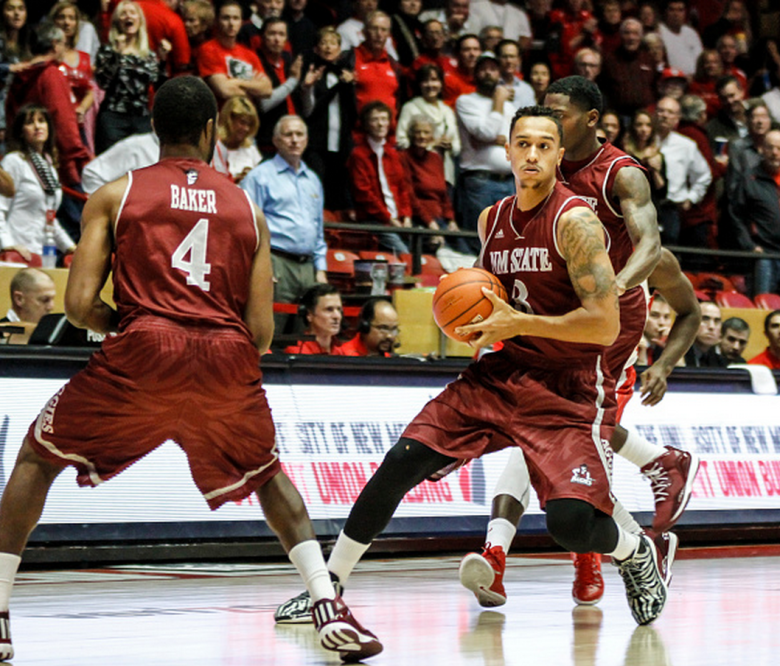 Remi Barry #3 of the NMSU Aggies prepares to pass the ball to teammate Ian Baker #4 during their game against the UNM Lobos at The WisePies Arena aka the Pit on December 3, 2014 in Albuquerque, New Mexico. New Mexico won 62-47. (Getty)

New Mexico State University is located in Las Cruces, New Mexico, which is just under 50 miles north of El Paso, Texas. Founded in 1888 as the state’s land-grant university, NMSU has an enrollment of just over 17,600.

In 1960, the constitution of New Mexico formally recognized the institution as NMSU. New Mexico State not only offers various educational programs, but also research and public service opportunities. Areas of study include agricultural, consumer and environmental sciences, education, engineering and health and social services.