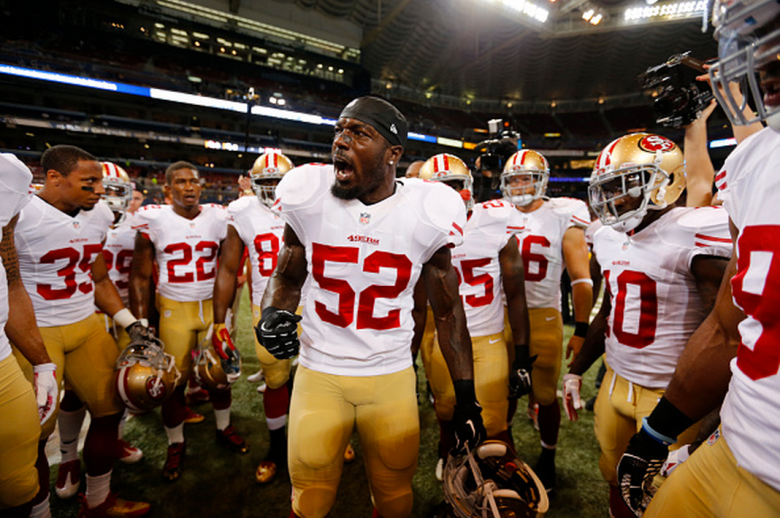 Patrick Willis #52 of the San Francisco 49ers fires up the team on the field prior to the game against the St. Louis Rams at the Edward Jones Dome on October 13, 2014 in St. Louis, Missouri. The 49ers defeated the Rams 31-17. (Getty)

Well the hits just keep on coming for the San Francisco 49ers. Lots of changes have continued to occur for the team, which went 8-8 this year, in the aftermath of the season.

First it was 49ers Head Coach Jim Harbaugh, who left – whether mutually or not – to take the helm at the University of Michigan. Then running back Frank Gore signed with the Eagles Tuesday, March 3. And there’s been reports of Michael Crabtree departing as well as guard Mike Iupati and QB Colin Kaepernick.

And this is all coming just a year removed from three straight NFC title game appearances.

While speculations continue to loom around the organization, one player surprised many when he announced March 9 that he will be retiring.

Here’s what you need to know about Patrick Willis:

1. Willis Is Retiring Because of a Toe Injury

According to AL.com, the 30-year-old linebacker is retiring due to a chronic toe injury that he suffered just six games into the 2014 season. Willis told CSN Bay Area:

I don’t look to play this game for just another year. I feel like I have five or six more great years of football left in my body. Unfortunately, this toe was telling me otherwise.

And since Willis is still under contract, which was signed in 2012 for a total of $50 million across five seasons, through 2016, his retirement could result in the partial repayment of bonus money he previously received, but that is yet to be determined by the 49ers.

Willis’ retirement is expected to become official on Tuesday, March 10, which is the first day of the 2015 NFL fiscal year.

2. Willis Was a First Round Draft Pick 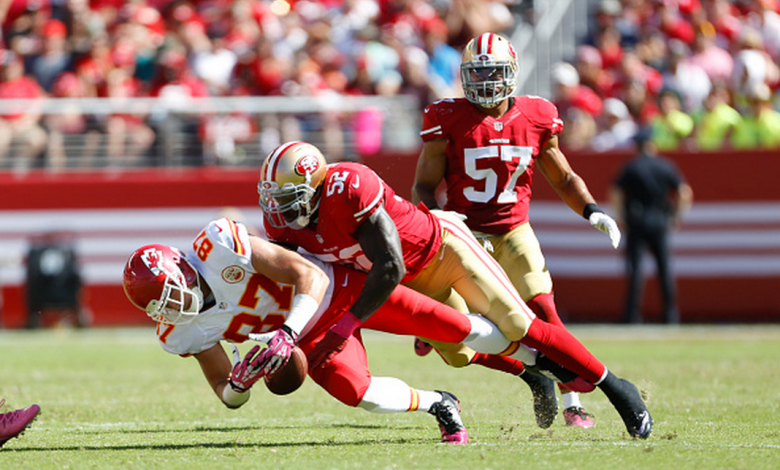 Patrick Willis #52 of the San Francisco 49ers breaks up a pass to Travis Kelce #87 of the Kansas City Chiefs during the game at Levi Stadium on October 5, 2014 in Santa Clara, California. The 49ers defeated the Chiefs 22-17. (Getty)

Willis joined the NFL in 2007 when was the No. 11 pick in the first round by the 49ers. Since then he has ranked up several awards and recognition to his name.

He was a pro bowl selection in each of his seven years in the league. Willis was a 2012 NFC Champion, a five-time first-team all-pro, 2007 AP NFL Defensive Rookie of the Year and the NFL tackles leader and the 49ers MVP in 2007 and 2009.

Willis was also named the NFL Alumni Linebacker of the Year in 2007, 2009 and 2010, and was ranked No. 10 in the Top 100 Players both in 2012 and 2013.
Smith is under contract through 2015. Their retirements could result in the partial repayment of bonus money they both previously received; whether that issue will be pursued will be up the to 49ers. 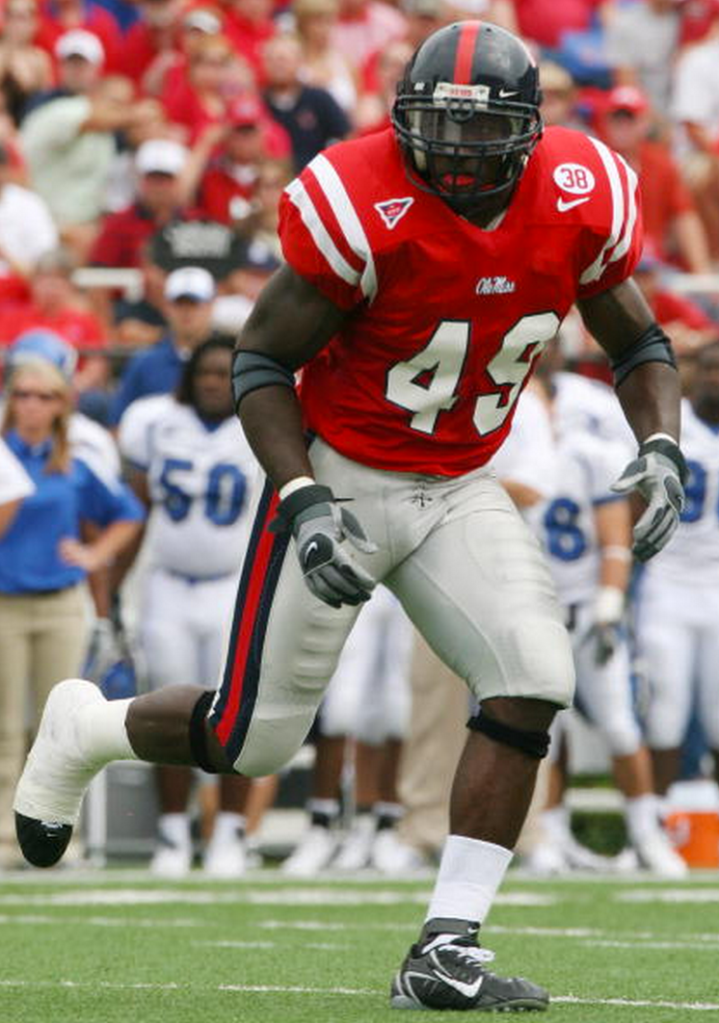 From 2003-2006, Willis played ball for the Rebels at the University of Mississippi – aka Ole Miss. During his four-year career, Willis studied criminal justice and amassed several awards on the football field.

He was named to the First-Team All-SEC and a First-Team All-American in 2005 and 2006. Willis won the Dick Dick Butkus Award, the Jack Lambert Award and the Conerly Trophy all following the 2006 season. He was also the SEC Defensive Player of the Year in 2006.

As a freshman, Willis played in all 13 games and totaled 20 tackles. He also received the Scholar-Athlete Award from the Ole Miss chapter of the National Football Foundation and College Football Hall of Fame.

In his sophomore season, Willis played in 10 of 11 games, totaled 70 tackles and led the team with 11 tackles for a loss and five sacks.

Willis’ junior year, he led the SEC in total tackles and was ranked No. 6 in the nation with an average of 12.8 per game. He finished the season with 128 total tackles, 9.5 tackles for loss, three sacks, an interception and two forced fumbles – one he recovered.

In his final season with the Rebels, Willis, again, led the SEC in tackles with 11.4 per game and collected 137 tackles, 11.5 tackles for loss, seven passes deflected, three sacks, two forced fumbles and one fumble recovery. 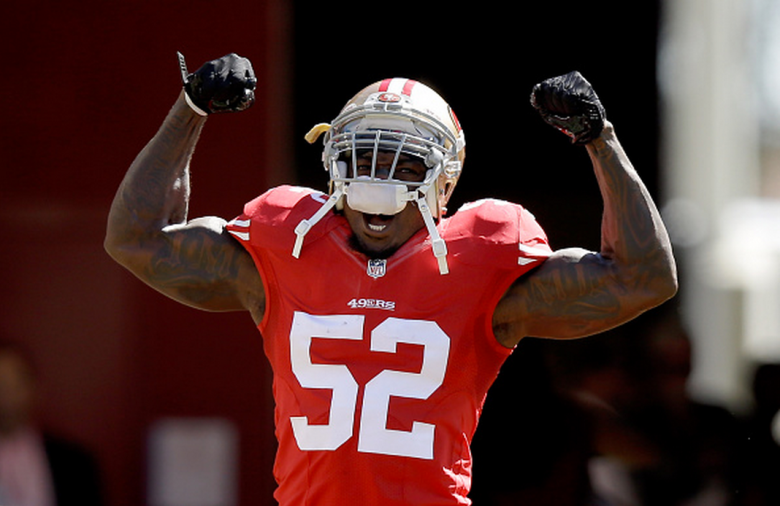 Patrick Willis #52 of the San Francisco 49ers runs onto the field during player introductions for their game against the Kansas City Chiefs at Levi’s Stadium on October 5, 2014 in Santa Clara, California. (Getty)

The 6-foot-1 LB was born in Brockton, Tennessee and grew up living in poverty and caring for his younger siblings. He started working in the cotton field at the age of 10 and by 17, he and his brothers and sister moved in with his high school basketball coach to escape the violence of his father.

Willis attended and played ball at Hollow Rock-Bruceton Central High School. He was a four-year varsity letter winner in football and basketball, and a three-year letter winner in baseball. On the gridiron, Willis was a two-time All-State selection, Regional MVP and West Tennessee Player of the Year. He was also the first person in Tennessee state history to be nominated for both the Mr. Football Award for a Lineman and the Mr. Football Award for a Back in the same season.

As a recruit, Rivals had Willis listed as a three-star and the No. 60 LB prospect in 2003. Scout had him as a two-star recruit and No. 32 overall. 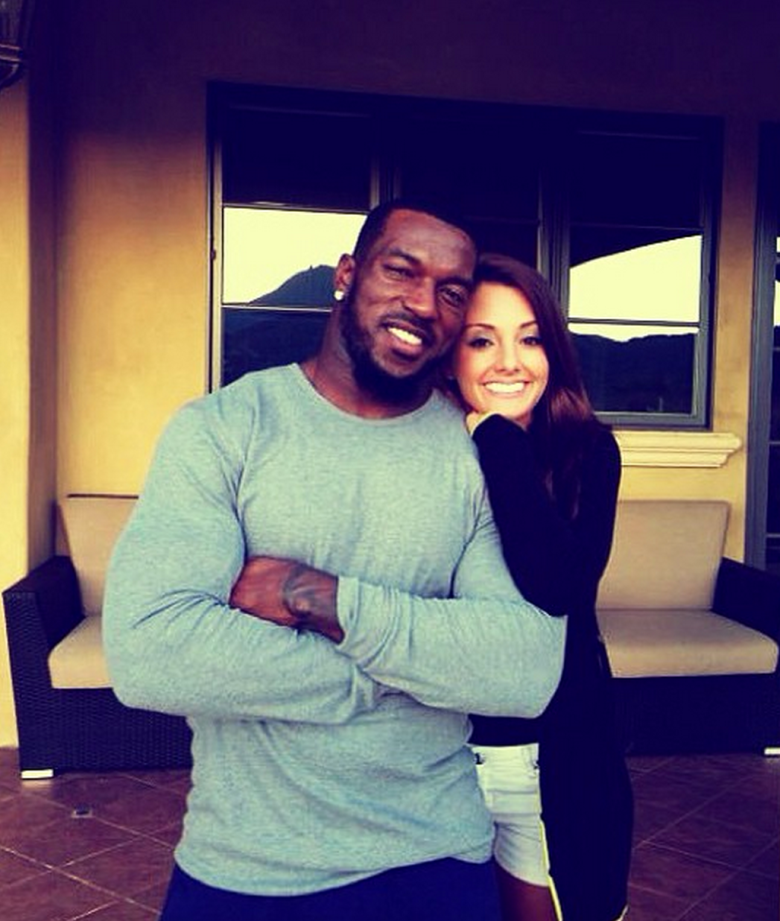 Shenae Saifi posted this photo of her with 49ers’ LB Patrick Willis and the caption: “Ride or Die @patricklwillis” (Instagram/shenaesaifi)

Willis is a Christian, and according to PlayerWives.com, so is his fiance Shenae Saifi. The site said Saifi posts Joel Osteen references on her Twitter.

While the two were engaged in October 2012, there hasn’t been too much light shed on their relationship, which tends to be the opposite when you’re talking about a star athlete and their love life.