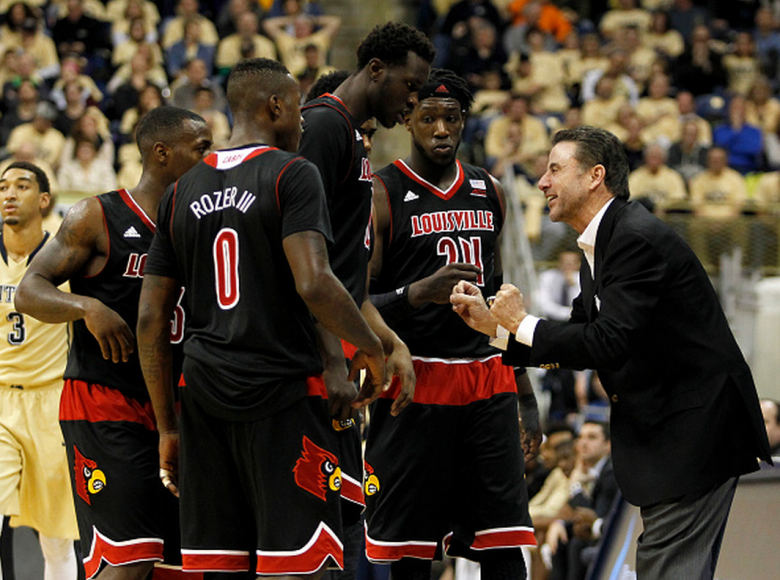 Head coach Rick Pitino of the Louisville Cardinals coaches against the Pittsburgh Panthers during the game at Petersen Events Center on January 25, 2014 in Pittsburgh, Pennsylvania. (Getty)

Pitino followed it up with a Sweet 16 appearance last year. And this season has been a bit of a rollercoaster for Louisville. But Cardinals’ Pitino has put his experience to use to put together a strong roster that’s looking to get a chance to hoist that national championship trophy high once again. After getting a selection committee bid, Louisville is the No. 4 seed in the East region bracket and posts a 24-8, (12-6 ACC) record heading into tournament play.

Get to know the man with a winning recipe. Here’s what you need to know about Rick Pitino: 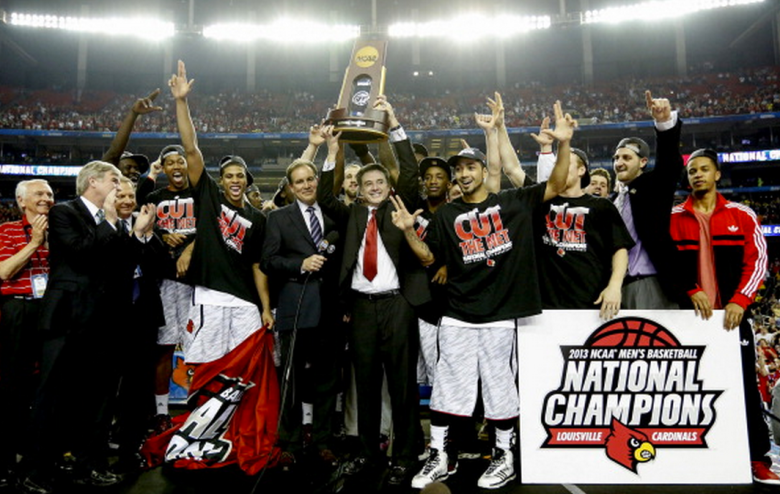 Pitino, 62, first took the helm at Louisville in 2001. Since then he has coached the Cardinals to three Big East Conference Tournament titles – Louisville didn’t join the ACC until last year – three Final Four berths and one national championship. Pitino was also named to the Naismith Memorial Basketball Hall of Fame in 2013.

And that’s just at Louisville. Pitino has an extensive coaching background that includes Hawaii, Boston University, Providence, Kentucky and two NBA teams – the Knicks and Celtics. He is the only men’s coach in NCAA history to lead three different schools to a Final Four and the only one to win two national championships at two different schools. Pitino is also one of two – Roy Williams being the other – in NCAA history to have led two different programs to at least three Final Fours each. And he joins Dean Smith, Mike Krzyzewski and Jim Boeheim as one of the only coaches to take his school to the Final Four in four separate decades.

Heading into the 2014-15 season, Pitino’s $5,758,338 per year salary makes him the second highest paid men’s basketball coach, according to Business Insider. Duke’s Mike Krzyzewski is the highest and almost double Pitino’s salary figure – Coach K makes $9,682,032 per year with the Blue Devils. 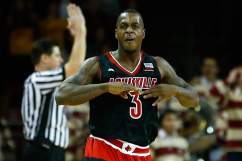 How to Watch Louisville vs. UC Irvine Live Stream Online 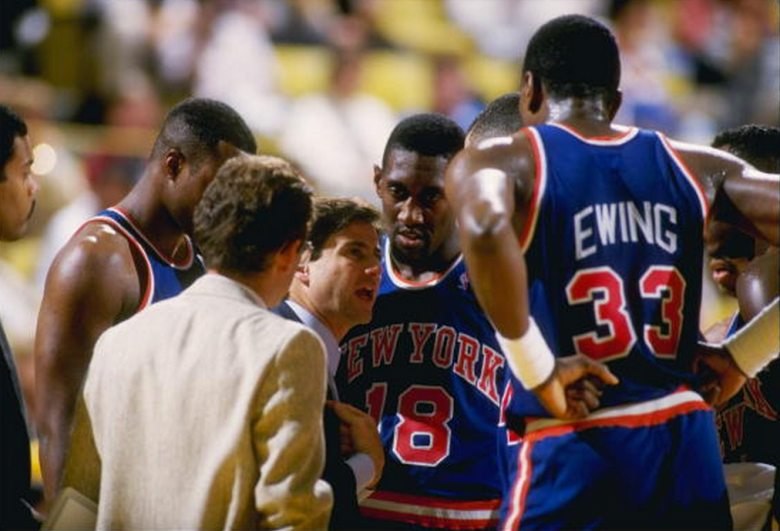 Oct 1987: Head coach Rick Pitino of the New York Knicks talks to Patrick Ewing #33 and other teammates during a Knicks versus Los Angeles Lakers game at the Great Western Forum in Inglewood, California. (Getty/Rick Stewart /Allsport)

While Pitino made his mark in collegiate hoops, his experience doesn’t stop at that level. He spent nearly nine years coaching in the NBA.

After his five years at Boston University, Pitino took the assistant coaching position under New York Knicks head coach Hubie Brown. He held that job from 1983-1985 and then returned to the NCAA to take over the Providence program. Pitino spent two years in Rhode Island before returning to the Knicks program, this time as head coach. After another two years, he again returned to the NCAA – this time as head coach of the Kentucky Wildcats.

Eight years and one national championship later, Pitino made another comeback to the NBA when he took the head coaching job with the Boston Celtics. He spent four years at Boston before taking the Louisville job in 2001 and, as we all know, he has stayed with the Cardinals, which has been his longest coaching stint in his 41-year career. 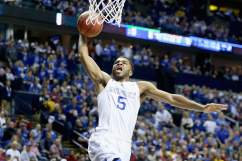 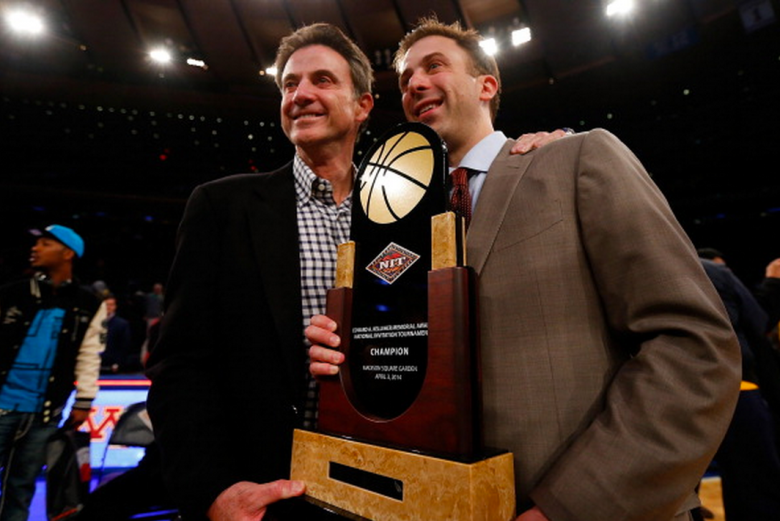 Like father like son. While it didn’t hold true for three of them, it did for Richard Pitino. The 32-year-old coach has been following in the footsteps of his father since 2004 when he got his start as an administrative assistant under College of Charleston head coach Tom Herrion.

He spent one year there before taking the assistant coaching job at Northeastern for a season and then Duquesne for a year. Richard then joined his father at Louisville in 2007. He stayed there through 2009 before moving to the assistant position under Florida’s Billy Donovan.

Following the 2011 season, Richard returned to Louisville as the associate head coach for the upcoming season. He then left to take his first head coaching job at FIU. Although he was only equipped with six returning players, Richard coached a high-pressure defense that finished eighth in the nation in steals and compiled an 18-14 overall record and 11-9 Sun Belt conference mark, which was the best in school history. Richard also led the No. 4 seed Golden Panthers to the Sun Belt Tournament Championship game where they fell by two to Western Kentucky.

And just after one year of experience as a head coach, Minnesota came knocking with an opportunity. Richard took the head coaching job and finished the 2013-14 season with the Golden Gophers having the most wins in school history and earning the NIT Championship with a 65-63 win over Larry Brown’s SMU squad.

Here what the elder Pitino had to say about his son not listening to his advice of not becoming a coach:

4. Pitino Got a 2013 National Championship Tattoo

Pitino hasn’t only written books about success, but he’s even been tatted up to showcase his winning ability.

About midway through the 2012-13 season, Pitino made his team a promise that he would get a tattoo if they won it all. Well, the Cardinals came through and Pitino held true on his promise.

Within two weeks of taking home the hardware, Pitino got inked at Tattoo Salvation, a parlor east of campus, and Louisville senior SID Kenny Klein made it viral:

Louisville Coach Rick Pitino follows through on his promise to his team to get a tattoo #L1C4 pic.twitter.com/rOluY1l0yv

5. Pitino and His Wife Outlasted Affair Rumors and Extortion 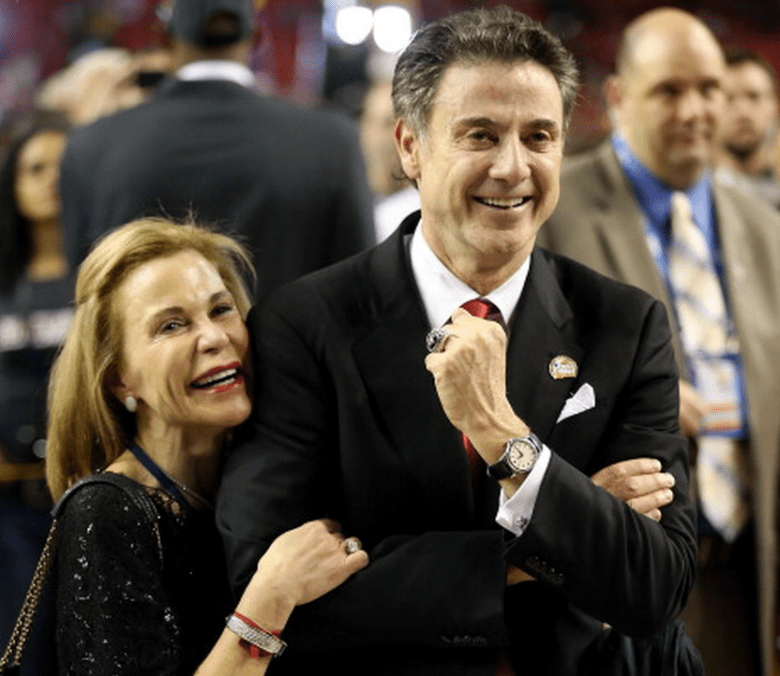 Head coach Rick Pitino of the Louisville Cardinals and his wife Joanne celebrate after they won 82-76 against the Michigan Wolverines during the 2013 NCAA Men’s Final Four Championship at the Georgia Dome on April 8, 2013 in Atlanta, Georgia. (Getty)

In 1976, Pitino married Joanne Minardi. Since then the two have had five children – Michael, Christopher, Richard, Ryan and Jacqueline. Pitino and his wife had another son, Daniel, but sadly he passed away in 1987 at the age of six months due to congenital heart failure. In his honor, they founded the Daniel Pitino Foundation, which raises money for children in need, and they created the Daniel Pitino shelter in Owensboro, Kentucky.

Unfortunately this wasn’t the only trying time in their marriage. In 2003, Pitino admitted to having engaged in sexual relations with Karen Cunagin Sypher, the wife of Louisville equipment manager Tim Sypher, in a Louisville restaurant, Porcini’s. Following the incident, Sypher told Pitino she was pregnant and wanted to get an abortion, but she didn’t have health insurance. Pitino gave her $3,000.

In April 2009, Pitino announced that he was the target of an extortion attempt. During the court trial Pitino’s story was slightly different than Sypher’s. He said the incident took “no more than 15 seconds.” Towards the end of April, Sypher was arraigned and charged in US District Courth with extortion and lying to federal agents. In addition to the Pitino lies, Sypher also claimed her estranged husband was paid to marry her.

While this was a rough time for Pitino as a coach and a husband, the school and his wife remained by his side.