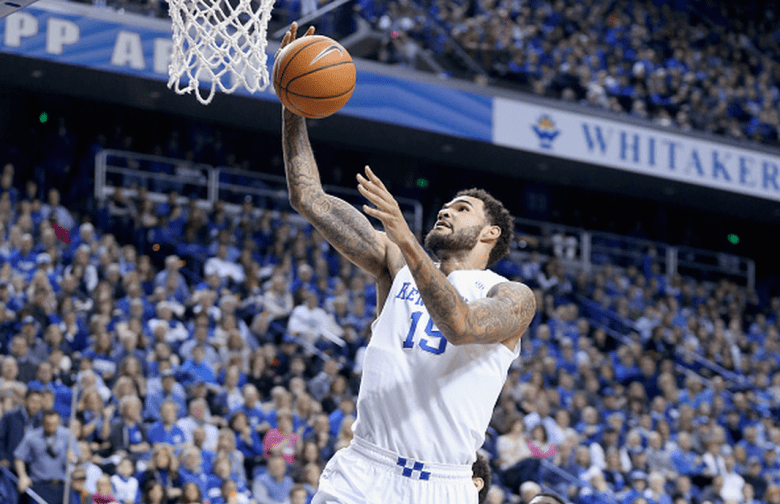 Willie Cauley-Stein #15 of the Kentucky Wildcats shoots the ball during the game against the South Carolina Gamecocks at Rupp Arena on February 14, 2015 in Lexington, Kentucky. (Getty)

Kentucky is looking to be the first team since the 1976 Indiana Hoosiers to have a perfect regular and post season. If head coach John Calipari and the Wildcats succeed in their efforts, they would be just the ninth team in NCAA history to achieve complete perfection.

A main proponent to Kentucky’s success is junior Willie Cauley-Stein. The 7-foot, 240-pound forward has been dominant on both sides of the ball this season, and in turn has received plenty of media attention.

Here’s what you need to know about Willie Cauley-Stein:

1. Willie Cauley-Stein Is Ranked Within the Top Ten in The SEC For Rebounding And Blocks

Wildcats’ No. 15 doesn’t just swat the ball away from an opponents’ shot, but he also pulls it down for his team – he ranks ninth in the SEC for rebounds per game.

2. He Missed The Last Three Games of The 2014 Tournament Due to an Ankle Injury 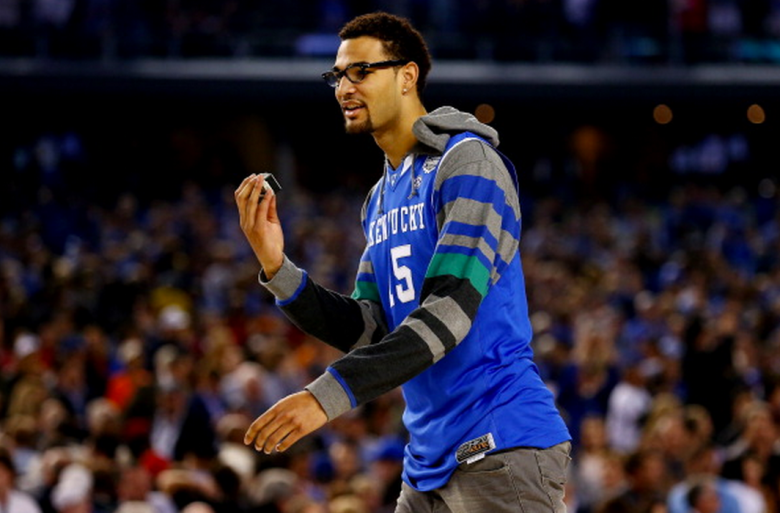 Injured Willie Cauley-Stein #15 of the Kentucky Wildcats walks on the court after defeating the Wisconsin Badgers 74-73 in the NCAA Men’s Final Four Semifinal at AT&T Stadium on April 5, 2014 in Arlington, Texas. (Getty)

Last year, Kentucky was the eighth-seed in the Midwest bracket with a 24-10 record. The Wildcats bypassed No. 9 Kansas State in the second round, broke No. 1 Wichita State’s 35-game win streak in the third round, and edged out No. 4 Louisville in the Sweet 16.

While the Wildcats would go on to defeat No. 2 Michigan in the Elite Eight round, No. 2, in the West region bracket, Wisconsin in the Final Four, and fall just short of a National Championship to No. 7 UConn by a final of 60-54, Cauley-Stein was watching from the sidelines.

Shortly into the first half of the Louisville game, he endured a season-ending ankle injury.

Although Calipari found success with his adjusted offense, Cauley-Stein said it was hard to watch his team fall in the championship game, which is also his reason for returning to Kentucky this year.

Being at the Final Four this year was special, but not being able to help my teammates on the floor was tough. I look forward to helping us get back there next year, while playing in front of the best fans in the nation. 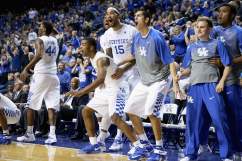 3. He Was Ranked in The Top 10 for Centers in The Country by Multiple Recruiting Sites Coming Out of High School 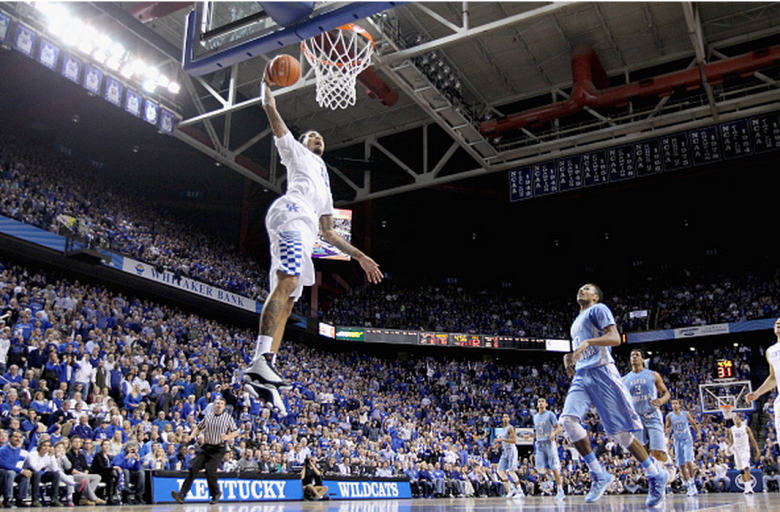 Willie Cauley-Stein #15 of the Kentucky Wildcats dunks the ball during the game against the North Carolina Tar Heels at Rupp Arena on December 10, 2014 in Lexington, Kentucky. (Getty)

While at Olathe Northwest High School in Olathe, Kansas, Cauley-Stein was ranked as the 6th best center in the nation by Rivals, and 10th best by Scout.com and ESPNU Recruiting.

Following his junior year, Cauley-Stein averaged 15.8 points and 8.5 rebounds per game. And overall, he was ranked 20th by Scout, 32nd by ESPNU and 39th by Rivals.

He received attention from Alabama, Florida and Kansas State, but committed to Kentucky on October 31, 2011 following his visit on the 14th, according to Rivals.

4. Cauley-Stein Was a Sought-After Football Recruit 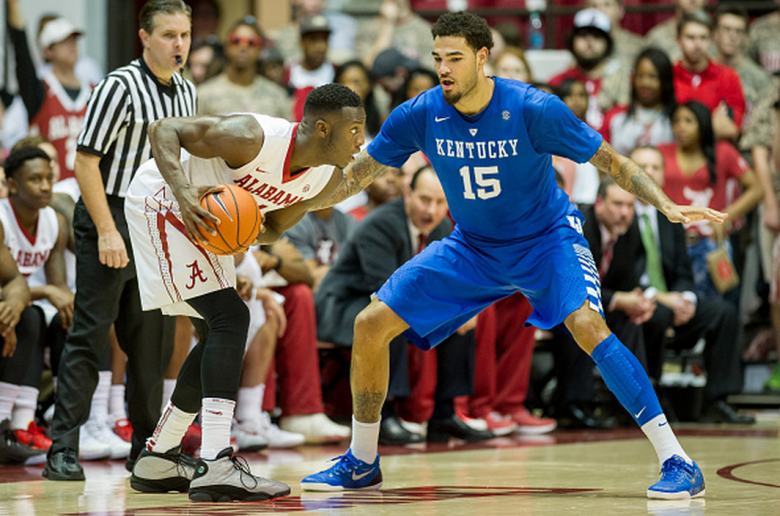 He was not just a standout on the hardwood, but on the high school gridiron as well. As a wide receiver with the Ravens, Cauley-Stein scored 15 touchdowns and caught 64 passes for 1,265 yards across the nine games his senior season. He averaged 19.7 yards per reception and helped his team to a 5-5 record and a run at the playoffs.

Although Cauley-Stein aspired to be a quarterback, his coach Todd Dain told the Lexington Herald-Leader he was top-notch as a wide receiver.

He was the number one receiver in Kansas. No other receiver in the state had the year he had.

Despite Cauley-Stein committing to his basketball career, he told the paper it was hard to see his former Olathe Northwest teammates tweeting about football.

I got almost depressed because I wasn’t playing (football) anymore. 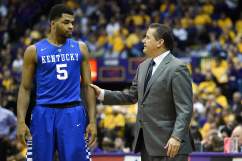 5. He Bypassed the NBA Draft Twice to Return to Kentucky 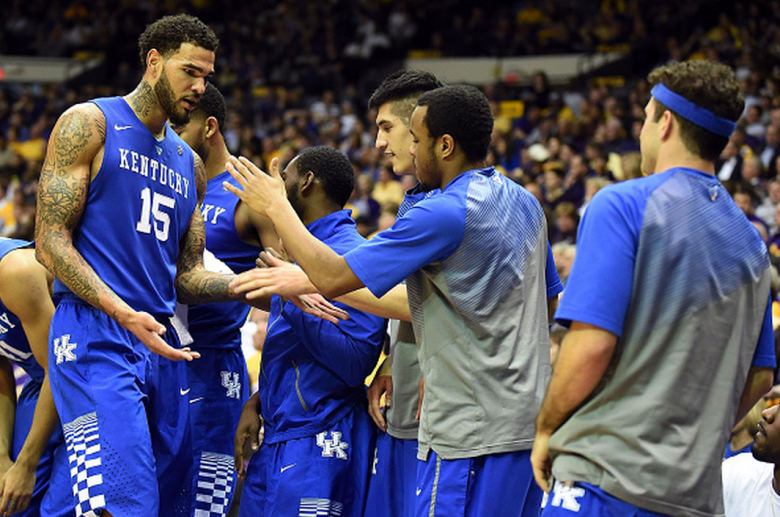 Willie Cauley-Stein #15 of the Kentucky Wildcats is greeted by teammates as he comes out during the second half of a game against the LSU Tigers at the Pete Maravich Assembly Center on February 10, 2015 in Baton Rouge, Louisiana. (Getty)

In his freshman season at Kentucky, Cauley-Stein was a two-time SEC Player of the Week, a 2013 All-SEC Academic team, and was named to the All-SEC Freshman team. NBA draft talk loomed around his name, and with the one-and-done reputation Calipari has built with his Kentucky squad, Cauley-Stein opted out of declaring for the NBA.

As a sophomore, he was named to the 2014 All-SEC Defensive team, and many thought he would be off to the NBA, but again, Cauley-Stein decided to return to Kentucky for his junior season.

I want to come back and have a chance to win a national championship, while also getting closer to earning my degree. I feel this emptiness in me like I still got something to prove and I still got so much stuff to work on in my game. I went up from last year and now I want to take another step. I want to make another jump in my game. And I love school. I love being at Kentucky. I love the fan base. I love the community. I love the people there. So it’s like, why not stay until they make you leave?

He wanted to know what I’d think if he didn’t turn pro at all—as in, ever. For a while he was really gung-ho about the NBA. I still think he wants to go. But he’s just interested in so many different things besides basketball.

Although the article went on to say Cauley-Stein is interested in starting his own clothing line and he voiced his desire to win a national title, Draft Express has him listed as seventh overall in the 2015 mock NBA draft and No. 1 with regards to juniors.

Whether we’ll see him suit up in a Kentucky jersey for a fourth year is to be determined, but for now Cauley-Stein and the Wildcats are focused on their tournament run.