She is usually all smiles when reporting on TV for ESPN.

But Britt McHenry was caught on video looking far from happy as she berated a towing garage lot attendant using vulgarity and personal attacks.

ESPN suspended McHenry for one week, though, according to a TMA Sports story, many of her co-workers believe the punishment was not severe enough, with some allegedly calling for her firing.

McHenry was paying to get her car back, which had been towed on April 5 in Arlington, Virginia, while she ate dinner. She was obviously upset having to fork over whatever cash it cost.

In the video, McHenry can be heard saying:

Yep, that’s all you care about is taking peoples’ money. With no education, no skill set. Just wanted to clarify that.

The normally cheery McHenry was anything but in the clip.

According to TMZ Sports, ESPN launched an investigation into the situation before deciding on the suspension, as the Worldwide Leader said:

We are aware of the recent exchange between Britt McHenry and a towing company employee. We are now reviewing the matter with her.

A few hours after the incident, McHenry tweeted an apology:

In an intense and stressful moment, I allowed my emotions to get the best of me and said some insulting and (cont) http://t.co/Wx37XF2QtM

Here is what you need to know about McHenry:

1. McHenry Was Caught on Video Cursing Out a Parking Lot Attendant

Be warned the clip has serious vulgar language. The video was released by LiveLeak.

The video shows McHenry, who appears to be paying to get her car back after it had been towed, ripping into the parking lot attendant, identified as Gina Michelle, with a series of put downs and disparaging remarks.

Early in the video, McHenry says:

I’m in the news sweetheart, I will f**king sue this place.

To which the attendant replies “I’ll play your video, so careful.”

The tow company, Advanced Towing based in Arlington, Virginia, accepted McHenry’s apology and said she shouldn’t lose her job with ESPN over the incident.

2. She Is Currently a Reporter for ESPN

McHenry and her unidentified friend leaving the tow garage. (Twitter)

You can see her often reporting from the sidelines for baseball’s Nationals and the NFL’s Redskins as she is Washington, D.C.-based.

McHenry contributes to SportsCenter, Outside the Lines, NFL Live and Baseball Tonight.

A quote from the video, directed at the attendant:

Do you feel good about your job? So I could be a college dropout and do the same thing?

3. McHenry Worked For the Padres for 2 Weeks

McHenry came to ESPN from ABC 7 in Washington, D.C.

She worked for two weeks for Fox Sports San Diego as a dugout reporter for the Padres, but returned to D.C. quicker than you can “Petco Park” three times fast.

McHenry also worked for News Channel 8 in the D.C.-area as a sports reporter and part-time anchor.

Another quote from the clip:

‘Cause I’m on television and you’re in a f**king trailer, honey.

4. She Played College Soccer for Stetson

McHenry attended Stetson University in Deland, Florida, and played soccer for the Hatters during the 2004 season. It is a Division I program.

McHenry got her master’s degree from Northwestern University’s Medill School of Journalism.

McHenry said in the video:

That’s why I have a degree and you don’t.

She graduated in 2004 from Satellite High School, where she played soccer with Ashlynn Harris, a goalkeeper for the U.S. Women’s National Team.

McHenry ends her discussion with the attendant with the following: 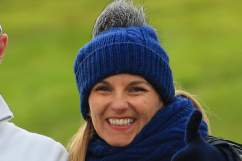